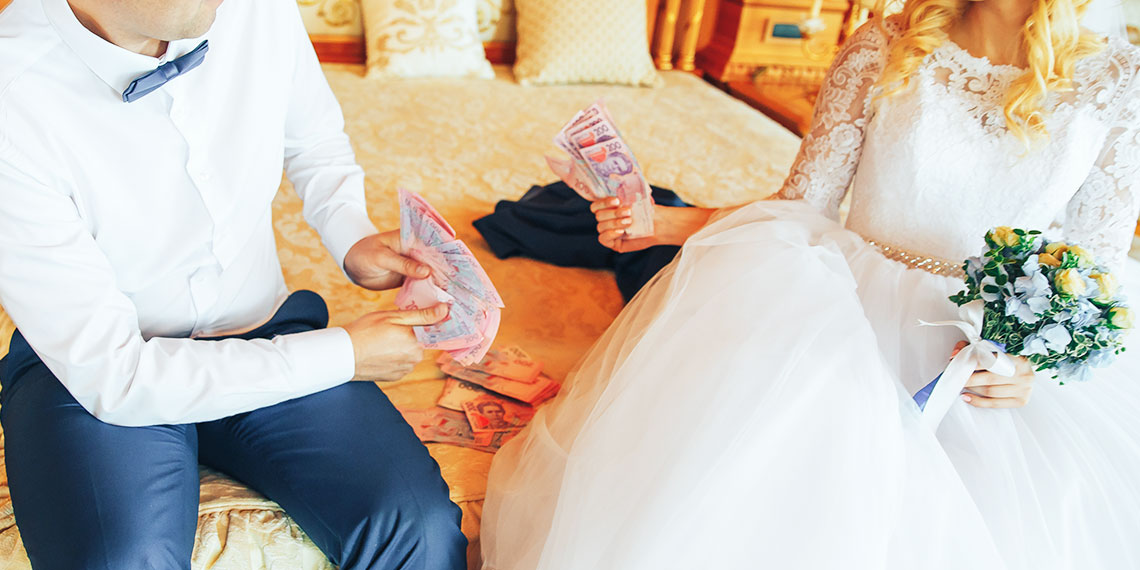 Crazy Wedding Story Of The Week: Bride Scams Friends & Family Out Of $30K In Wedding Donations

Welcome back to another Crazy Wedding Story of the week. This one is especially crazy and convoluted. It has everything: a ridiculously demanding bride, angry family members threatening to sue, and a twist you definitely won’t see coming. You’re so welcome that I’ve brought you this juicy incident to brighten your Wednesday. I know, I know—I deserve a f*cking medal. Or, in lieu of a medal, I will also accept $30,000 in donations—you’ll see why in a sec. I can’t really give an introduction to this story without giving too much of it away, so let’s just cut right to the chase.

Today’s crazy wedding story comes to us via the Choosing Beggars subreddit, which proves in and of itself to be gold. The premise of the subreddit is exposing choosy beggars, i.e., people who expect ridiculous freebies for no good reason. Highly recommend for your procrastinating-at-work pleasure. So when someone posted screenshots to r/choosingbeggars of a Facebook post in which a bride reveals she’s canceling her wedding after receiving a whopping $30,000 in donations, the post quickly went viral on the subreddit. Just in case we have some dirty deleting on our hands, here’s the screenshot of what went down:

HOLY SH*T. First of all, it’s nuts that this couple managed to raise $30,000 BEFORE the wedding. But that’s obviously not the real issue here. How in the actual sh*t does someone think it’s okay to collect tens of thousands of dollars from their friends and family, then pull a bait-and-switch? Then ask for MORE money and gifts?? The audacity of these people. I would be mildly impressed if I didn’t want to slap the sh*t out of them.

The thing with donating money to a cause is that you typically expect the money you give will, in fact, go to that cause. Sooooo flip-flopping and saying that you suddenly need to use that money for a lavish honeymoon BEFORE you’re even married (which, let’s be real, is simply a vacation) and to get yourselves financially stable, makes actually zero sense.

Here’s a hot tip: if you’re not financially stable, you probs shouldn’t be taking a $30k honeymoon. I’m no business insider, but that seems like pretty legit advice, right?

Also, you know that “rescheduled wedding” ain’t happenin’ and this is just a blatant cash grab. If I knew this person, not only would they not get another gift from me for their honeymoon, but they would never see another cent from me as long as we both shall live.

NATURALLY, every family member, guest, and wedding party member rightly freaked the f*ck out. The screenshots for you, my loves:

There’s so much more than even these, but can I get a rich uncle who just gives me like $12k? That’d be tight. Also, can we not with the one bridesmaid that’s like “I gave you $200 and I love you—I’m such a good friend”? Alright, Gretchen Wieners, take it easy.

If the initial post and comments seemed a little wild even for the average psycho wedding story, you aren’t alone in being all, “hmmm.”

The detectives at Buzzfeed did some sleuthing and it looks as though this entire incident could have been a marketing ploy by some bullsh*t company. I mean, good job, marketing assholes. The post went up on Reddit on Monday and quickly was shared, like, everywhere because of how purely insane it is.

More screenshots of the family responses popped up on Monday night, but only via some f*cking website we’ve never heard of called CapturedIt.club, which seems a little weird. When it did go up, literally NOTHING ELSE was on the website. Sketch.

Any additional “comments” from family members had the Captured It Club watermark, which, like, again, seems a bit odd. If these are real screenshots, why are they watermarked with some rando website’s name? Damn, how did none of us pick up on this? I feel like a fool. Even more questionable, none of the Facebook posts had any reactions, which is pretty weird. You would think something of this caliber would be a sea of angry face emojis, wow faces, and dislike buttons. The nail in the coffin, though, is that GoFundMe has no record of a bride named Pam and her supposed fiancé, Edward. And despite mentioning an Amazon registry in her original post, no such Amazon registry for a Pam and Edward exists.

And, after Buzzfeed published their article exposing the fact that this whole story may have been a PR stunt, capturedit.club took everything down off their website and replaced it with this screenshot:

So… it looks like we’ve all been hustled, scammed, bamboozled, led astray. But now I have more questions than answers. Who/what is Ben Hobbs? What the f*ck is the point of this capturedit.club website in the first place? Why were we all so eager to believe that someone would scam their friends and family out of $30,000?

I guess I’ve got to hand it to the people behind this weird-ass website for fooling us all. But, honestly, I’m kind of sad this isn’t real. What does that say about me? Perhaps I’ll grapple with these existential dilemmas in next week’s crazy wedding story.