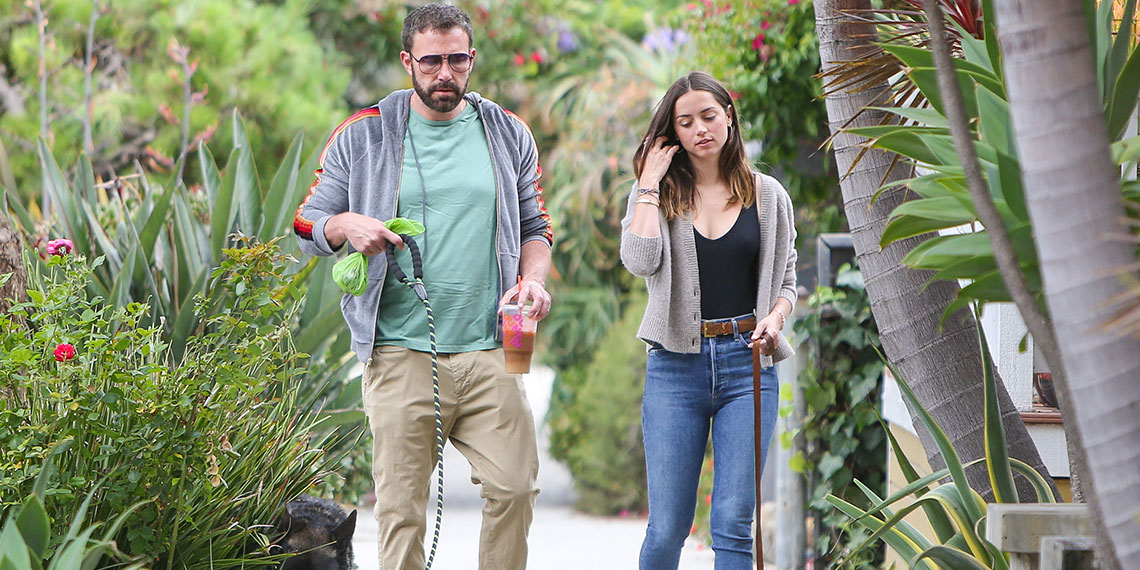 There’s no doubt that 2020 is a weird year for dating. Normally, most of us would be in the middle of some kind of summer fling, but my personal life is currently drier than… *tumbleweed rolls through my apartment*. But plenty of celebs have figured out how to date in the middle of the pandemic, so at least we can live vicariously through their relationships, right? Right?? I’m not sad at all.

The last time we checked in on quarantining couples was back in March, and it’s safe to say there have been some developments since then. In the past few months, we’ve seen lots of breakups, new couples, pregnancy announcements, and even engagements and weddings. Today, we’re focusing on couples who got together either during quarantine or right before, and honestly, it’s impressive how many celebs have found love amid an ongoing global pandemic.

When I was a little girl, my birth dad always called me his “little partner” – something that might’ve sounded strange without his southern cowboy like accent. To me it made perfect sense. And today that word makes perfect sense again but today I’m officially going to be someone else’s partner. @maxehrich – I knew I loved you the moment I met you. It was something I can’t describe to anyone who hasn’t experienced it firsthand but luckily you did too.. I’ve never felt so unconditionally loved by someone in my life (other than my parents) flaws and all. You never pressure me to be anything other than myself. And you make me want to be the best version of myself. I’m honored to accept your hand in marriage. I love you more than a caption could express but I’m ecstatic to start a family and life with you. I love you forever my baby. My partner. Here’s to our future!!!! 😩😭❤️🥰😍 Ps. THANK YOU @angelokritikos FOR HIDING BEHIND ROCKS AND CAPTURING THE ENTIRE THING!!! I love you boo!!!

I don’t really have a concept of time anymore, but I know this pandemic has been going on for a while because one of our favorite quarantine couples is ENGAGED! It was first reported that Demi and Max were together at the end of March, in the early days of quarantine. At first, they kept things pretty quiet, but we got confirmation of the relationship when Demi accidentally walked in on Max’s Instagram Live. God, that feels like it was three years ago.

Since then, they’ve been a lot less shy about their relationship, and it seemed like things were getting serious. Turns out things are really serious, because today they graced our feeds with some gorgeous beach engagement photos. They both posted really sweet captions, with Demi saying she’s “ecstatic to start a family and life with” Max. But mostly I’m just focused on that RING. Ladies, if your partner is dragging his feet and saying he can’t propose during a pandemic, just send him these pics.

Megan Fox is living proof that you can make it through divorce and even find love again on the other side. It probably helps that she’s like, extremely hot, but whatever. Shortly after splitting from Brian Austin Green this spring, she was spotted hanging out with Machine Gun Kelly, and she appeared in one of his music videos around the same time.

donuts are hot. 🍩🔥 let’s get 10 million views on Bloody Valentine video before the weekend’s over 💝

They’re still extremely together, and are currently in Puerto Rico, where they’re working on a movie with none other than Randall “Fofty Please” Emmett. Lala Kent is there too, and Megan and Mr. Machine Gun (do I call him Colson?) went on the latest episode of their podcast. Megan said that when they met on the set of the movie pre-pandemic, “I knew right away that he was what I call a twin flame.” They hit it off right away, and with Colson (I’m going with it) calling Megan his “future wife”, an engagement might be in their near future too.

One of our favorite rappers, and one of our favorite Diet Starts Tomorrow alums? Obviously a match made in heaven. Denise Bidot’s modeling career has been exploding lately, and her personal life seems pretty great too. Last month, Denise shocked everyone when she posted some adorable photos with Lil Wayne on her Instagram story, saying “in the middle of all the madness, something special happened. Us.” Ugh, this is so f*cking cute. The next week, Wayne posted a pic of Denise in the pool, and she’s the only person he’s following on Instagram, which is a f*cking power move.

Honestly, if you star in a Netflix show for teens and don’t date your costar, that’s just a bad career move. Outer Banks stars Chase Stokes and Madelyn Cline went public with their relationship last month, two months after the premiere of their show. Since then, they’ve posted lots of pics of each other, and things seem to be going well. Speaking to Us Weekly this week, Chase said that quarantine was an “immediate test” of their relationship, but that “we’ve got great communication.” He added that it’s helpful to be “friends before you dive into a relationship.” These two might be in it for the long haul, or at least until season 2 comes out.

These two finished filming a movie together shortly before sh*t got real with coronavirus, but they’ve done their best work as a couple in the last few months. Early in quarantine, their daily walks were basically the only thing keeping the paparazzi industry afloat, and full articles were written about Ben’s Dunkin’ coffee order. Ana met Ben’s kids, and at one point, they trolled the paparazzi by putting a cardboard cutout of Ana in his front yard (yes, that actually happened).

In loving memory of the 450 Dunkin’ stores that will permanently close by the end of the year… pic.twitter.com/sOOw0HKpbJ

My personal favorite angle here is the iconic Ana de Armas Updates Twitter account. The account has long been dedicated to documenting Ana’s career, which is undeniably on the rise. But early in the pandemic, they switched to BenAna coverage, and after they lightly trolled the couple for not wearing masks, Ana BLOCKED THE ACCOUNT. The account is actually hilarious, and they continue to pump out great content despite their blocked status. Really, this saga is the only thing that’s been getting me through 2020. In recent weeks, Ben and Ana haven’t been photographed in public, but they’re definitely still together. I guess daily pap walks got old after a few months.

While all these couples basically seem to be killing it during quarantimes, it’ll be interesting to see what happens once things are back to normal. But honestly, that probably won’t be happening any time in 2020, so it doesn’t even matter at this point. Cheers to not being alone! *cries into iced coffee*