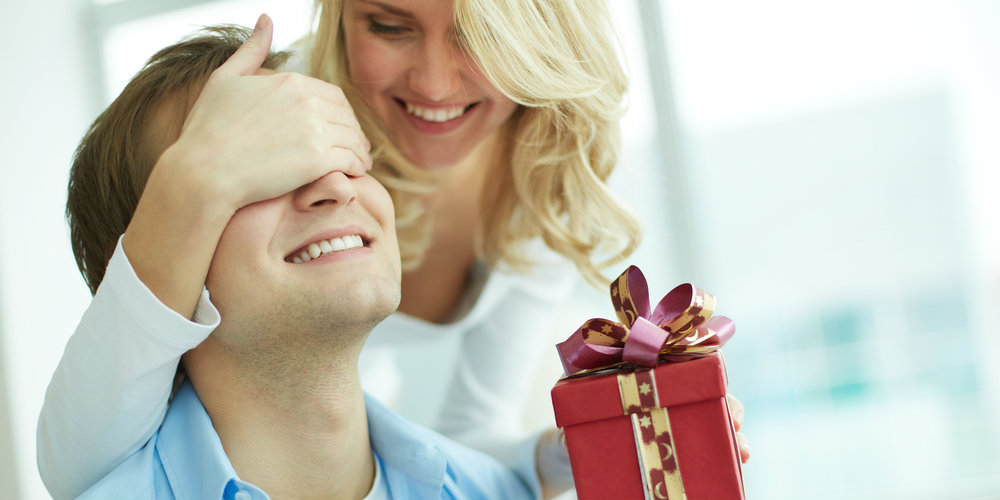 I won’t lie, shopping for men is fucking hard. That’s not to say that men don’t like stuff, because plenty of dudes have more stuff than Khloé Kardashian has butt injections. It’s just that we tend to fall into two camps: oblivious dudes who definitely need and even want stuff, but don’t realize it; and obsessive hobbyists who very vocally want and need stuff—it’s just that all of their shit is incredibly specific and expensive. Ask one what he wants for his birthday, and he’ll say something like “I dunno, shoes or something?” Ask the other, and he’ll reply with three paragraphs detailing the specifications of the $5,000 modification he wants for his gun, or whatever the fuck he’s way too into. Buying birthday gifts for men is hard, and I’m sorry.

That said, one way to make things easier is to break it down by how long you’ve been dating. That is, your boyfriend’s monetary worth to you is based on his emotional worth to you. In other words, the longer you’ve been humping, the more money you should feel free to spend on him. I’ve provided some helpful suggestions based on some arbitrary relationship durations, which I just made up, right now. Along with them I’ve added some ideas that don’t cost anything at all for all you broke-ass bobo betches out there.

Gosh, this is awkward as fuck. What’s wrong with you, getting involved with a guy so close to his birthday? There aren’t a lot of good options here, because it’s doubtful that you’re even calling this guy your boyfriend yet. If you are, it hasn’t been for very long—certainly not long enough to justify buying him anything too expensive. This speaker is as good a choice as any, cheap, useful on its own, and still sufficiently impersonal. It’s waterproof and attaches to tile with a suction cup, so he can listen to music in the shower. That’s good, because people get naked in the shower, which will make him think of having sex with you.

Totally to your discretion here, as I don’t begrudge anyone for not wanting to photograph their naughty bits in an age where everything is permanent. But if you’re feeling a little free and/or frisky, a snap won’t hurt. The golden rule is that you can show either your face or the parts that would get you banned from Instagram, but not both.

Ah, that feels better—you’re in real, tell-your-friends-and-maybe-even-your-family-about-him relationship mode. You should now feel comfortable spending a little more money on him, which is nice because God knows he’s spent enough by now trying to woo you into the sack. A nice way of reminding him of how important to you his wallet is, I think, is to buy him an actual new wallet. These minimalist ones have gotten popular lately, because they don’t fuck up our backs when we sit on them and/or they fit in our front pockets. This one is even better, because the aluminum construction and (spurious) military ties will make him feel like a real man as he whips it out pay pay for your fourth frozé of the afternoon.

When I say sex in public, I don’t mean like, right on the sidewalk or whatever. That’s not a kink, that’s deviance. I mean somewhere like a bar bathroom, an apartment balcony, a golf course at night, etc. It’s definitely a little trashy and you could still get caught, but that’s kind of the fun of it. Just stay away from schools and daycares, and you should be fine.

You know the drill: more time, more money. At this point in the relationship, you’ll start noticing just how barely-together most adult men have their shit. Like, how does this dude have such a good job when he only uses the free toothbrushes from the dentist? Why hasn’t a grown man been to the doctor since high school? It’s times like these when we might need some help with the basics, and these sneakers are a good addition to the ever-dicey “casual but not, like, gym shoes casual” footwear category. Native shoes are all “beast-free” (i.e., vegan) if that matters to you, and there are lots of good colors to choose from. And since summer’s coming up, the beauty of these is that they’re ultra lightweight and breathable—important for going sockless without the dreaded swampfoot. I feel like that’s an issue men and women can unite behind.

Free Option: Anything New In The Bedroom

Well shit, I guess you guys like really love each other or something, huh? Birthdays get weird in long-term relationships. On the one hand, you want to give him something that at least partially reflects your love and admiration for him. On the other, you’d like to think you’re past the point of him needing anything from you to celebrate the fact that he’s lived his 31st year on this planet. Split the difference and get him a nice, handsome watch that doesn’t break the bank like this one. It’s more sentimental than a pack of underwear or whatever, but it’s not as try-hard as a fucking Rolex or other absurdly priced timepiece.

Free Option: Get Out Of Town

Head Pro, because he’s so cool and not materialistic, doesn’t want much for his birthday: just for everyone to follow him on Twitter and Insta at @betchesheadpro, and to email him at [email protected]. And also, to Venmo him $50.