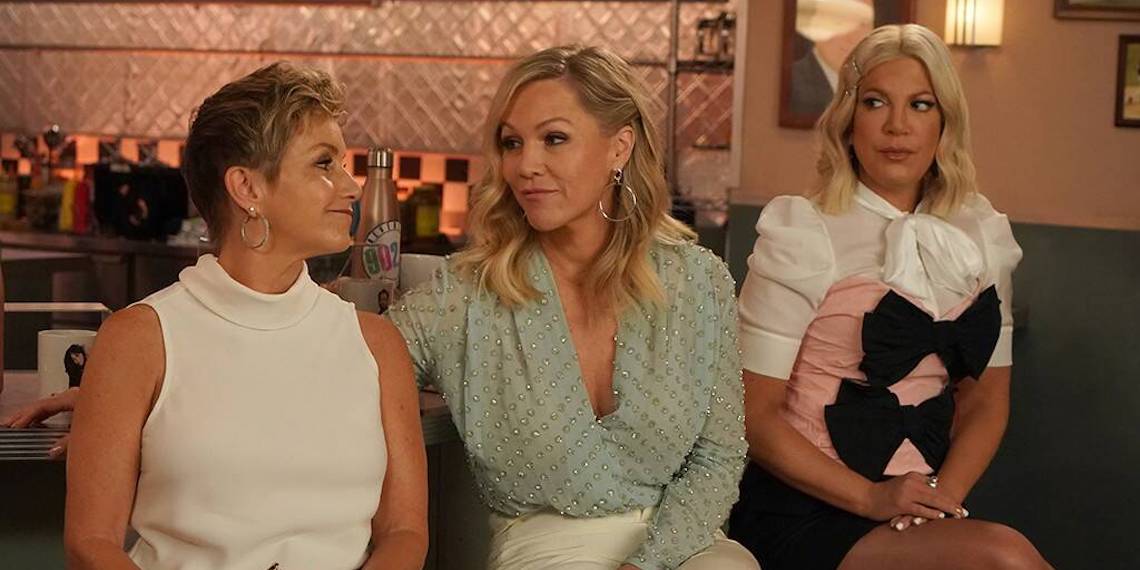 You already know it wouldn’t be an episode of the 90210 reboot without a dream sequence opening! This is the finale, there’s no tricking us anymore, so when the episode opened with Ian Ziering talking to his younger self at The Peach Pit, there was no surprise. This was definitely the most boring of the dream sequence collection, and after a couple of words of advice from old Ian telling young Ian that he needs to cut his mullet, stop wearing crop tops and start a family, he wakes up (in a face mask, no less) fresh and ready to start the day!

He gets to set and expresses to Brian that he’s sick of doing this whole no-strings-attached thing with the boring writer, whose name I still haven’t bothered learning. Brian complains about how many strings he’s stuck with, what with his super hot wife Lala Anthony and their three beautiful kids. Ian goes to the nameless writer and tells her he can’t do this whole NSA thing anymore! She tells him she can’t ever actually date an actor, explaining that her mom is an actor, so it’s just a bad association for her. Ahhh, so now it makes sense how a writer with no credits got such a baller-ass job. Ian says something stupid about appreciating her honesty and agrees to continue the NSA relationship. (For the record, with me, even if we only ever kissed, strings have been attached. I shoot strings from every pore in my body.)

The cast is all celebrating wrapping shooting for the pilot, with the exception of Jason who is on an island getaway with Vanessa Lachey to work through their marital issues, the way only rich people can. Sidenote—Jason is inexplicably hardly ever in the show, and even when he is, it’s usually through FaceTime or some bullsh*t, so I don’t know what’s going on there. Anyway, they decide to divorce because they’re sick of trying, which I get. Who cares anyway; I’m just sad that Vanessa is going to have to start auditioning for things again.

Three weeks later, the cast is all still waiting to hear if they’re getting picked up by Fox, their biggest concern being a reboot of The OC that’s competing for the same spot. In an act of desperation, Tori tricks Emily Valentine’s assistant into sending her the feedback from the people who watched and reviewed the pilot, and forwards it to the whole cast. They all start spiraling out of control when they find out what everyone thinks of them, which isn’t even bad, and Brian and Tori find bizarre ways to flirt as though they’re not both still married.

Shay, Brian’s wife, tells him that she secretly had his “son” Zack’s DNA tested, and it turns out he’s 100% not his kid. Brian, being the typical man that he is, is obviously mad that his wife is more successful than him and freaks out on her for going behind his back. We’re left thinking their marriage is definitely on the rocks, but to be fair they both kind of gave up on acting in this finale, so it may just be that leading us to believe their relationship is crumbling. The next day, Brian confronts Zack about lying to him, and poor Zack says he really thought Brian was his father and it’s not his fault! Which like, fair, it’s not his fault, but also we were led to believe Zack was a psychopath killer for the bulk of the season, so it’s hard to now have empathy for his crazy ass. After some counseling from Shannen Doherty, Brian tells Zack he’ll still be a father figure to him, which is f*cking insane because they’ve known each other for a month and a half—it’s not like Brian raised him from childhood and then found out he wasn’t his biological father. But whatever, live your fantasy Brian, just please live it with your shirt off.

Across town, Tori and her husband get home from a long day to discover they have no electricity. They argue about how hard life is while Tori’s phone rings over and over again from someone trying to garnish her wages, and maybe it’s only because I’m poor as well, but I get it Tori! Hang in there! Also her marriage is doomed.

Meanwhile, Gabby’s relationship with her sweet husband is in trouble when she introduces him to Emily Valentine at the wrap party and he immediately can tell that they’ve had sex. After a quick conversation on the couch at Jason’s fancy club, he casually says “I don’t know how long ‘I don’t know’ will be good enough Gab,” and she replies “I know…” before they share a romantic kiss and we’re all left wondering when exactly the f*ck Andrea Zuckerman started getting laid on the regular!?

Speaking of train wrecks, Jennie is still dating the brainless, hot bodyguard who is obsessed with the way beer is brewed—which just like…I don’t care. In her defense, he is super hot, so I understand why she’s dealing with him talking about malt and hops all the time, but then he reveals his new chest tattoo: the initials “JG.” As soon as Jennie realizes that they’re her initials she runs for the hills, leaving her relationship with boring, hot bodyguard in the rearview, and bumps into her daughter, Kyler, who’s also unbearable. Nepotism runs in the veins of 90210, so it’s no surprise when Kyler complains constantly about only having one line. She finally relents after being told by Shannen that you have to pay your dues. During their little heart to heart, Shannen reminisces about a time 20 years ago that they all showed up in the same red dress to an event and didn’t speak for weeks, naturally. Kyler becomes obsessed with Shannen and starts downloading meditation apps and talking about rescuing roadkill possums. This does lead her and Jennie to have a little conversation that makes us believe everything will be okay in their relationship, a welcome result after the first episode where Kyler was filing for emancipation.

Emily Valentine, who’s just the absolute worst, announces that they’re heading to NY for upfronts! They did it! Upon arriving, Ian bumps into an old friend, Real Housewife of Beverly Hills and acting legend Denise Richards. Before long they’re in her hotel room “catching up” and licking each other’s necks. The next day, Ian excitedly introduces the boring writer to Denise and emphatically tells her what an amazing job she did on the script, with a smirk Denise says “Well of course she did a great job! She’s my daughter.” JAW DROP. Only not actually, because from the moment I saw Denise I knew she was boring writer’s mom. We wouldn’t have gotten that little foreshadow of her talking about her actor mother if she wasn’t going to be a quasi-famous guest star.

They all get in their outfits for the upfront presentation, obviously all wearing red, leading them to a multi-scene argument about who’s going to change. Emily Valentine comes in and lets them know the harsh reality of them being picked up to series: they have to move to Canada where it’ll be cheaper to film, and they can only afford to keep six out of the seven of them on as series regulars. “But we’ll save that conversation for another day!” Emily the nutjob jokes as they all walk out onto stage hand in hand to the classic Weezer song “Beverly Hills.”

As credits roll, we’re left with handfuls of questions. So that guy they arrested for being the psycho killer was actually the psycho killer? Is Jason actually Zack’s father? Why did Brian get worse at acting throughout the series? And most importantly—why the f*ck hasn’t Tori Spelling been asked to be a Real Housewife of Beverly Hills? Some questions are meant to go unanswered I suppose, and go unanswered they will…because if there’s a season two I will be completely gagged.