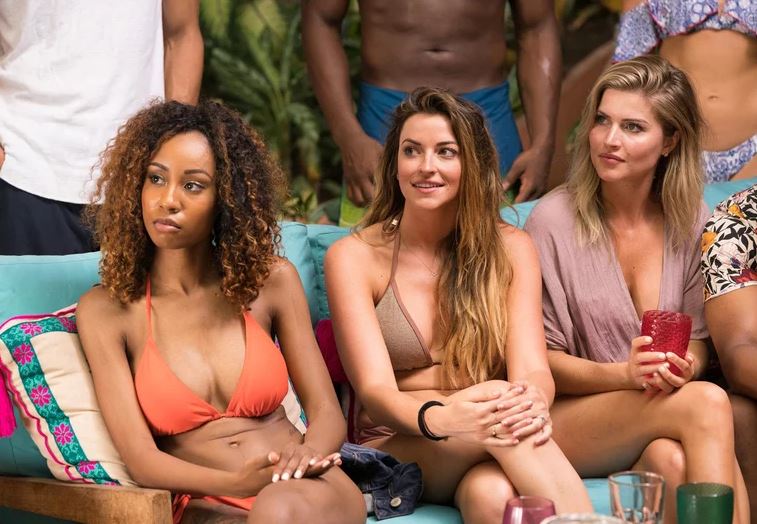 The Best ‘Bachelor In Paradise’ Recap You’ll Ever Read: Week 1

Good morning idiot hookers, and welcome back to another exciting season of Bachelor in Paradise! Why ABC decided to air the first episode one night after holding all of America hostage for three miserable hours to watch Becca ruin her life one last time, I’ll never understand. But here we are ! And while I’d rather bang my head against a wall for two hours than dive head first into any more soul-sucking Bachelor drama, I’ve realized that I maybe, kind of, sort of missed the hedonistic den of sin that is ABC’s slice of Mexico? So, shall we dive right in then? I mean, there’s only a storm brewing outside and I’m 90 percent sure my internet will fail faster than any of these people’s livers did on night one, but, sure, let’s do this.

I guess we’re jumping right into the intros then. As if I wanted to know any more about the intricacies of their flat tummy tea diets.

DAMNNN. Kevin just spilled the tea on Ashley I. He’s saying that Ashley made out with Jared while they were still dating, and I’m not surprised at all. If Jared said “cry” she’d say how “how many rivers?”

So David aka “The Chicken” is living at home with his mother post-filming. What catches they have this season! Ladies, I’m jealous. Also, David, you live in Boca Raton. You can totally marry your mom in Florida. It might actually be one of the only places.

Analise is up next, and she’s definitely going to be that girl that cries every week about how none of the guys like her.

BIBI: My goal here is to kill them. Kill them with. my. bootie.

^^I think I’m going to turn that into a motivational poster and hang it over my bed.

Jesus. Tia’s veneers just blinded me, so I guess I’ll only be listening to the rest of the episode. Seriously, have her teeth always looked like that?

I love that his bar for the trip is about as low as my bar for Hinge matches. Glad we’re on the same page, Joe!

You guys, what is with people’s teeth this season? I’m starting to really get freaked out here. Was there a discount on veneers and Crest White Strips before filming?

Okay, THANK YOU TIA, for commenting on Krystal’s voice change. Like, what happened to the baby prostitute voice that haunted my nightmares last January? Ugh. Of course she’s going after Joe, though. He’s like “she’s so sweet.” Oh, Joe. She is going to have sex with you and then rip your head off.

If Krystal dares ruin Joe’s pure, sweet demeanor, I will END HER.

Venmo John is like “the last time I was reserved and didn’t know how to talk to people but now I’ve discovered alcohol, so it’s easier.” Ah, the wonders of warm tequila, amiright John?

Okay, wait. Annaliese is Jordan’s type? Annaliese? The girl who’s afraid of bumper cars and puppies. If you don’t think she has a complex about golden underwear then you better think again, buddy.

The chicken gets here and Chris Harrison is like “I’m glad you came as yourself this time.” Is coming as himself any better though, Chris?

Surprise, surprise, Colton’s not here yet and Tia is freaking the f*ck out. It’s interesting that Colton never reached out to Tia even though she got him kicked off Becca’s season because of all of her “feelings” for him. I just feel like maybe he’s not that into her? I mean, the dude claims he’s never even seen a woman’s vagina before and yet Tia is here all but spreading herself on national television and he’s like “nah, I’m good.” Yeah, it’s suspicious AF.

GOD TIA. Stop bringing up Colton’s name when you have a f*cking dime piece like Joe in your presence! Seriously. If I hear the name Colton one more time I’m going to go outside in this storm with a piece of metal and beg this lightning to strike me.

In a cruel twist of BiP producer-orchestrated fate, Tia gets the first date card. Okay, she’s acting like that card is a herpes diagnosis and not an opportunity to share a dinner and Instagram followers with one of these washed-up street dogs. Get over yourself.

LOL I love that Bibi looks like she wants to fight her over this. Please do, girl. Put us all out of our misery.

Tia starts talking to grocery Joe and she’s like, “I’m not like other girls because I’m a relationship kind of girl.” Literally that is every girl with a pulse, Tia. Nice try.

WHAT. She picks psycho Chris?? Have they even spoken words to each other yet? Why??

Meanwhile, Kendall and Joe start vibing. And by “vibing” I mean dry humping on a chaise lounge, which is something her mother specifically told her not to do before going on this show. Here’s hoping her mother doesn’t take away one of her stuffed animal heads in retaliation.

Friendly reminder, people, that we’re an hour into this abomination of a television show and there’s still no clear storyline. It’s like watching drunk cats scatter on a beach and trying to make sense of it.

Speaking of sh*t that that doesn’t make sense, wtf are Chelsea and Nick doing cuddled up on a chaise lounge? It’s like watching my Snapchat story after blacking out at happy hour. You know, when you make out with a hot guy only to find out later he could barely keep his eyes open and says sh*t like “where’s all the p*ssy tonight.” I mean, if it was ten degrees cooler he’d be wearing a velour tracksuit!

NICK: Women with kids don’t bother me as long as I never see the child and her vagina’s recovered.
CHELSEA:

Cut to Tia and Chris’s date. She’s drinking water at this point and is STILL talking about Colton. It’s gonna be a longggg night.

Wait. I’m truly shocked she’s into this guy. Aha! The truth comes out. The two of them only like each other because they both don’t want to be single anymore.  I think they probably have more chemistry with their forks than each other, but okay. To each their own. And, hey, if Carly, a woman who said she got “limp dick” from sharing the company of a guy who would later become the father of her child, then anything is possible .

O.M.G. Colton is here and ready to f*ck up Tia’s newly found happiness. See, ladies, Paradise is just like the real world!!

They give Colton a date card because I guess production wants Tia to fling herself off a cliff this morning. Lol he starts pulling girls aside and none of them are Tia. What a class act he is! He’s, like, flirting with anyone on the island who has a vagina and a pulse EXCEPT TIA, but I have a feeling he’ll still pick her because he heard she might be happy with someone else.

AND WHAT DO YOU KNOW, HE CHOOSES TIA.

Wait so this “magical date” he took her on before Becca’s season was just a dinner at his house?! The boy didn’t even take you out in public, Tia? Like, he is a former pro football player and he’s trying to say that the best he can do for a date is to whip you up some Spaghetti-O’s at home? Seriously?? Oh, honey, baby, sweetie. DUMP HIS ASS.

God I can’t listen to these morons for one more goddamn minute. Colton’s like “I was into Becca but then you sent me home, so here we are” and Tia practically orgasms right there on that boat.

TIA: Idk why but I just keep coming back to you?

I KNOW WHY. He’s breadcrumbing you, sweetie! Tale as old as time.

Elsewhere, Chris is just stewing on the beach. All those steroids and hair gel—this can’t be good. He’s got all of Paradise riled up too. It’s like that scene with Gaston before the townspeople try and f*ck up the beast. Except with less talent and good intentions and obviously Chris is not as hot as Gaston. Obviously. That genius reference I just made pairs perfectly with this gif, so enjoy:

BRB I gotta take a musical break to sing “Gaston” to myself.

And on that note,  we have to to wait until next week to see how this fight plays out. I’m sure it’ll be about as manly as the fight I had in middle school with my sister over her stealing my favorite Delia’s shirt for school pictures. Should be lit. Until next week, betches!