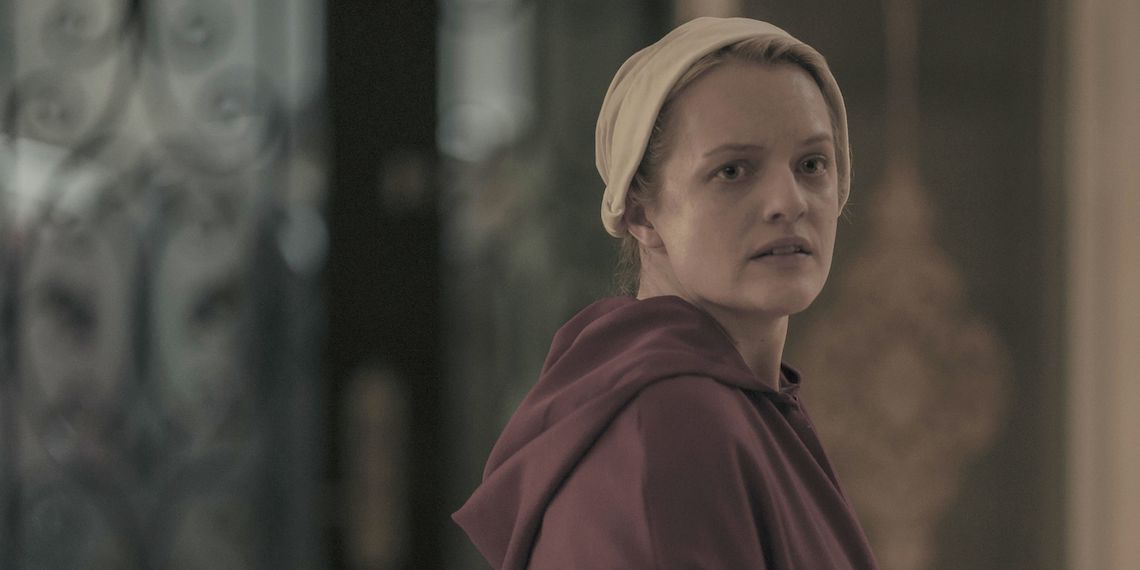 Aunt Lydia Is Not Okay: ‘The Handmaid’s Tale’ Episode 4 Recap

Thank God for this week’s episode of The Handmaid’s Tale. I had honestly gotten worried that the show was bad now after those first three eps, which felt like a hodge-podge of fake inspirational moments set to weird music. But this week, dear readers, we are back and I, for one, am happy to feel the familiar terror of a good Handmaid’s ep again. We also get lots of Janine, which is never a bad thing.

We open on church bells, which are never a good sign in Gilead. All the women of Gilead appear to be on a power walk. Gotta get those steps in. Just because you’re living under an oppressive patriarchal theocracy doesn’t mean you can’t be fit!

Aunt Lydia has a new scooter, which is nice for her. OfRobert calls her “Hell on wheels,” but I prefer “Paulina Blart Handmaid Cop.” Turns out they’re all walking to a mass baptism, which is the Gilead version of Coachella. When they arrive, Janine, OfMatthew the narc, and June all get to sit in the VIP section because they’ve had children before. How nice for them. Maybe this is a good birthday party theme after all???

Flashback To Before Things Went To Sh*t

All of this reminds June of when Hannah was baptized, which was a significantly less depressing affair. I had forgotten about June’s badass feminist mom, who immediately calls the priests “holier than thou child molesters” and tells June that you “cannot let religon control your choices,” because “thats what they want.” Foreshadowing much, Mama June?

The biggest takeaway from these scenes is that June and Luke are extremely cute, and Moira’s discomfort during the ceremony made me feel seen.

Fred is here. Why is Fred always here?

Gilead whenever they see babies:

After the baptism, there is a party at Janine’s old house, which the handmaids are invited to attend. Truly wild that Janine is invited to that party considering she once kidnapped the baby of the house and jumped off a bridge with it but, whatevs. All is forgiven, I guess.

OfMatthew: Handmaids shouldn’t be at the party. That’s not how it works.

OfMatthew was clearly the one who raised her hand to tell the teacher they forgot to assign homework back in the old days.

Serena Joy arrives fashionably late, and June pulls her aside to remind her that, despite the whole kidnapping and losing a finger thing, SJ is still the HBIC of the wives. She has the best eyebrows. She has all the cigs. She’s essentially the cool senior who smokes on the quad during lunch. And that, my friends, is power.

Can I just say the scenes of Emily trying to readjust to normal life are some of the best of this series and Alexis Bledel is a national goddamn treasure? Can I just say that?

Me as soon as Emily comes on screen knowing she is to be reunited with her wife:

Emily and her high cholesterol go to her wife, Sylvia’s, place to reintroduce her to their son, Oliver, and once again Handmaid’s Tale has me sobbing into my wine glass. Like, did they really need to cast an adorable little boy with an adorable little boy lisp for this scene? Couldn’t they have chosen one of those kids with the weirdly sweaty hands and a perpetual snot bubble or something? Give us a f*cking break.

Back to the Party

We open on a casual Aunt Lydia sh*t talking session. OfMatthew interrupts immediately with an “Aunt Lydia is just doing her job,” and it’s like OKAY HERMIONE DON’T YOU HAVE SOME F*CKING STUDYING TO DO?!? Janine has resumed her role as the Spongebob of Gilead by acting like getting frisked by the police was just some light tickling, and by offering to bring Aunt Lydia some tea. Here’s a screenshot of that moment:

Aunt Lydia: I know why all the handmaids don’t like me. They blame me for Emily.
Janine: *stares in one eyeball*

Meanwhile in the kitchen, the sh*t talking sesh has been interrupted by Fred, who clears the entire room within 30 seconds.

“Have you girls tried the buffet? The deviled eggs are delicious.” – Fred flirting.

Once the other handmaids are gone, Fred turns to June for advice about his marriage, which he thinks is ruined because of Nichole, but is actually ruined because he let his friends cut his wife’s finger off. This is basically a recreation of every time your guy friend comes to you for dating advice, and you have to find a way to gently tell him that he’s a f*ckboi with bad style whose dating app profile needs serious work.

June: Maybe you should let Serena have thoughts and opinions again?
Fred:

Cut to: Serena Joy enjoying a Virginia Slim by the pool.

June tells SJ that she told Fred to stop being such a f*ck and to give her more of a say in what goes on in Gilead. SJ repays this later by telling June where Hannah is most likely to go to school. Besties!!!

June: Wear the dress. Pull the strings.
Me: Brb I have a new tattoo to get.

Sadly, the party takes a dark turn when baby Angela (aka Janine’s baby) comes out to play.

Janine as soon as she sees Angela:

Things honestly go okay at first. Janine is allowed to hold Angela and she doesn’t try to murder-suicide her so it’s a definite improvement over the last time they hung out. Then, in typical Janine fashion, she loses her sh*t and starts begging to be their handmaid again so she can live in the house with Angela, which leads to Aunt Lydia LOSING HER F*CKING MIND AND BEATING JANINE IN FRONT OF EVERYONE. Clearly almost dying did *not* sit well with her and she’s basically the Hulk now. But like, a v religious Hulk that needs a scooter to get around. June eventually stops her but, damn, that’s one way to ruin a party. Like, of all the times I’ve been to a party and felt like I ruined it, at least I never lost my mind and beat the sh*t out of a mentally ill woman with one eyeball who also happens to be my only friend. At least I’ve never done that.

Like most parties that go south this fast, the police arrive. June lingers around to see the cops showing Fred and SJ some YouTube videos on their iPad. Weird. The video turns out to be of Luke and baby Nichole at a protest. This makes June happy, and when the cops ask her if that’s Luke, she confirms his identity, but is anybody else worried Gilead is gonna use this to try and get baby Nichole back? Like, is this going to be an Elian Gonzalez situation? Because I feel like Luke’s legal argument for keeping Nichole is dubious at best. But maybe that’s just the conspiracy theorist in me.

The episode ends with Moira and Luke trying to explain their relationship with Nichole to a priest so they can get her baptized, which only makes me believe more in my theory that a Nichole custody battle is forthcoming.

We end on a very sweet scene of Luke and Moira baptizing Nichole set to “Down by the River to Pray” from O Brother Where Art Thou? A family truly can look like anything!

Under his eye, fam. Until next week!