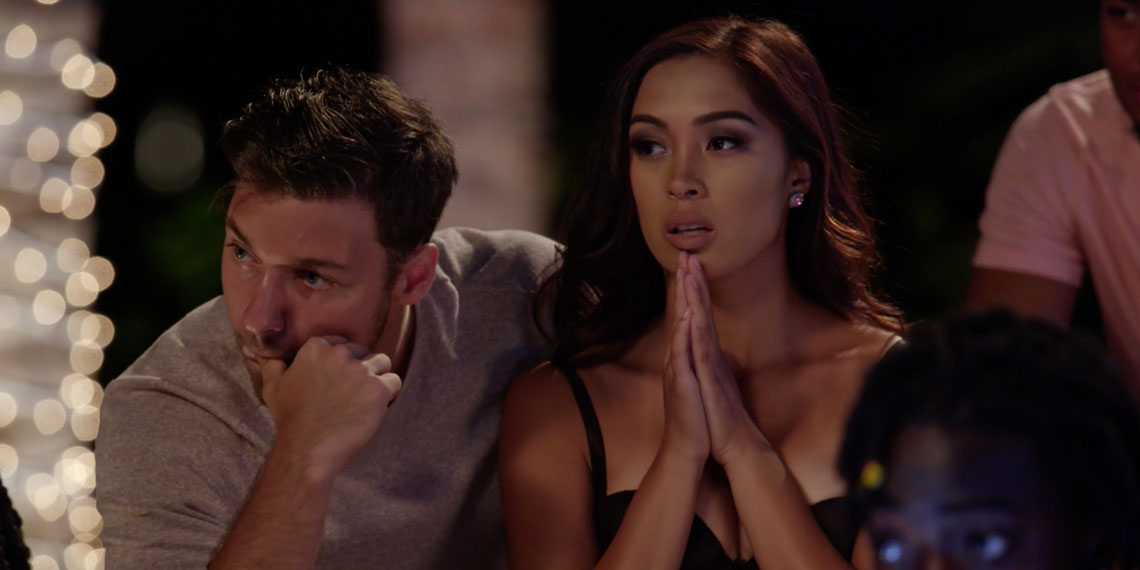 ‘Are You The One?’ Recap: I Know Where You Live

All right people, we’re back at it for another week! And by back at it, I mean our gang of lovable losers is blacking out and hooking up, and I’m trying not to get any potato chips on my computer. Thus far I’ve been successful, but the keys are greasy. Let’s begin!

Oh yes!! The “previously on” segment reminds me that we were left hanging last week. We’re waiting to see if the strategy devised by a girl who called Brett by the name of Zak for an entire argument worked. Needless to say, I don’t have a lot of faith.

And the gang gets four beams! Which means that Cali’s strategy did actually kind of work. But it also proved that she picked the wrong person as her perfect match, so I stand by my earlier statement that implied she was a dummy. So let’s break down what this actually tells us: Cam and Kayla are not a match, and Cali and Tomas are not a match. And Tevin and Kenya might still be. I’m not sure what else it tells us, though, because I guess I’m a dummy too.

Kenya and Tevin are feeling real smug about this outcome right now, and it’s making them about 900% more annoying than they usually are. Fun!

Cam and Kayla go outside to figure out what this means for them. They are sad. Cam says he told Kayla things he never told anyone else, and I’m betting it’s definitely about what happened in the basement during rush. They decide they’re going to stay together as a couple but also play this game. So like, what does that mean? Can he get a blowie or nah?

Back inside, Morgan is pissed at Zak. He promises not to kiss other people anymore. LOL his promises are worth about as much as Morgan’s hair extensions.

Outside, Cali and Tomas are talking about how they’re not a match. Here’s how it goes.

Tomas: I’m so sad I don’t know how I can carry on
Cali:

Kwasi, Daniel, and Lewis decide to pull Moe aside and tell him he needs to start stepping up and looking for his match. Okay, but collectively between these guys, we have one that’s hooked up with Samantha and one that got his d*ck sucked by Kenya and THAT’S IT. So we’re not really talking to the love experts over here. Moe decides he’ll pursue Kayla, and I’m already worried for him because she’s over in the corner, breasts being peppered with kisses from Cam, undeterred by the fact they’re not a match. Sweet, sweet Moe. I fear you’re about to get your heart broken.

Sam sets up a scavenger hunt for Daniel and it’s flashing me back to my sorority days when I would show up at chapter, make fun of everyone, and then not participate in dumbass activities like these! Enjoy, Daniel!

Papa T shows up, so you know what time it is. No, not time for a stern lecture about getting their grades up, but time for fate to f*ck some more sh*t up. Fate chooses Tevin and Kwasi and to everyone’s SURPRISE, Kenya and Morgan. How LUCKY! She always lands on the couples they want! If this is how fate works, I’m taking her to Vegas and treating her to the penny slots. Mama needs a new car!

Papa T announces that they will be ATV’ing for the date but then announces a surprise that he’s throwing the crew A PARTY! Wait, was this not a party all along? Was this a medical conference? Why do they pretend that something they do every night is special? Oh I’m sorry, now that I see them getting ready I realize that a party means more glitter. I’d also say maybe they oil themselves up, but I’m looking at Daniel, and we all know from Sam he is a SWEATY MAN so perhaps it’s just his natural juices.

Okay things are getting very soft-core porn-y at this party. Is this what Papa T intended? I would think he’d be very disappointed in all the genital-to-genital contact going on here.

Kwasi and Jasmine, with an assist from tequila, are starting to really get along.

Cam is a hot commodity at his party, apparently his dance moves are really turning the ladies on. Also he’s very sweaty so everybody keep Samantha away!

Cali is also getting her freak on and attracting the attention of, you guessed it, ZAK!! That motherf*cker who just promised Morgan he wouldn’t make out with anyone else. THAT VERY SAME ONE. He starts telling Cali she could be his match and trying to get her to make out with him!!! Morgan overhears all of this and has finally decided to stop being Zak’s doormat in and confronts him saying “So you’re saying Cali’s what you need, not me?!”

And guys, it gets BETTER!! Nutsa is cracking me up right now! Yelling “Morgan! Love yourself b*tch! Nobody else is going to do it for you!” all the while grinding up on some dude. Multi-tasking! I’m legit recording that and playing it for myself any time I’m feeling down. And you know what, Nutsa’s voice is actually growing on me. It’s kind of endearing.

Morgan is done with Zak, and I am SO GLAD. I’ve said it before and I’ll say it again. Zak will f*ck whatever is in front of him. Hide your dogs! Hide your sandwiches!

Guys, I appreciate Moe so much. He is really trying! And he’s been so nice to Kayla.

Daniel and Cali start dry humping on the dance floor, so I’m sure Sam’s earrings are gonna be coming off soon for a fight. Oh! No they’re not. She’s crying! Now I feel bad. How dare that sweaty man treat her like this?!

Oh WAIT! The earrings have come off! Sam is confronting Cali and poses the age-old question: “Do you think it’s okay to rub your vagina on my guy’s d*ck?!” Unfortunately Sam, I think the answer to that is yes, because she was just doing it. For a while, actually.

Okay I’m starting to think Papa T threw this party and he knew just what would happen. Perhaps he’s less wholesome than he lets on. Because DAMN people are freaking out left and right. Now Tevin is flirting with Jasmine. Did they spike all the drinks with Viagra or something?? Because all the dudes be thinking with their d*cks tonight. And now Kenya is upset.

We’ve finally made it to morning and the glitter survived, but dignity, livers, and relationships did not. But it’s time for our daters to ATV! Hopefully none of them have the spins!

On the date, Tevin and Kenya establish they still like each other. Great. Moving on. It’s time to decide who’s going in the truth booth. And it’s Tevin and Kenya! Why do I get the very bad no good terrible feeling that they are going to leave me on cliffhanger? Don’t do me like that, Terry!

Annnnnnd I was right! I’m boycotting! I’m never watching this show again. GET A NEW RECAPPER. Okay fine, I’m being dramatic but oh hey hi MTV publicist that sends me these episodes early, can I get next week’s real quick?

Well that was a wild ride, and a really fun episode. See all you peeps next time, and I hope that you all remember this week to love yourself, b*tch!