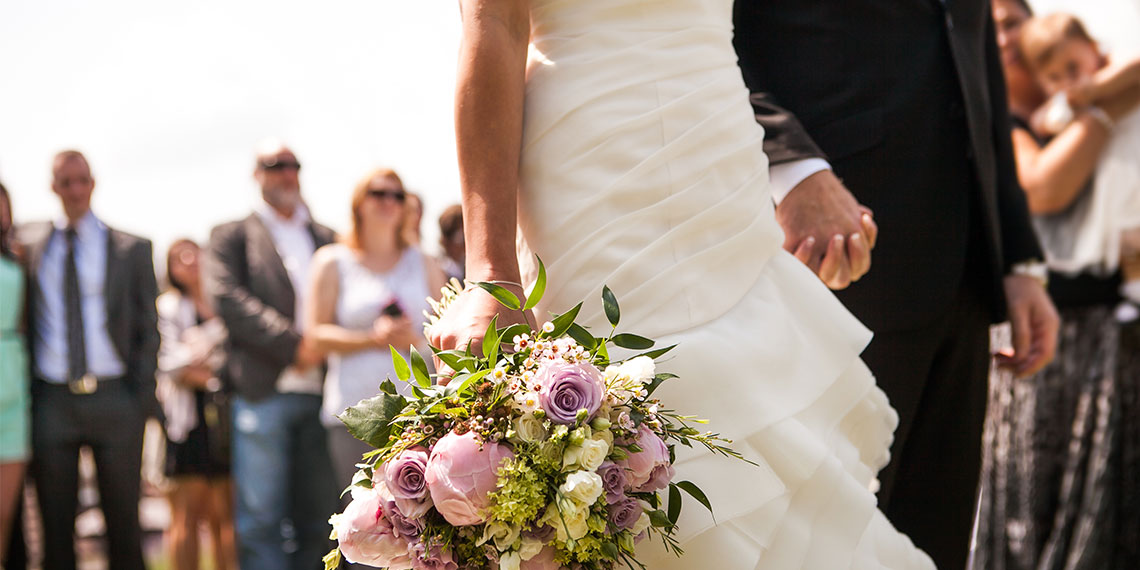 Some days you wake up, and you dream of doing good for the world. Volunteering at an animal shelter, donating canned goods to a local food bank, or giving a pity like to that girl who posts inspirational quotes. You just feel like doing the right thing. And other days? Well, other days you just kinda wanna f*ck sh*t up. What can I say? Life can get dull. Drama is fun. Sue me (actually, don’t. I’m in no way capable of entering a courtroom without quoting Legally Blonde and shouting “YOU BITCH,” and I feel like it just won’t go well for any of us).

Anyway, while adding more drama to your wedding (which is sure to be an already drama-filled day) might seem like a Nightmare Dressed Like A Daydream, it’s your day, dammit! And by God, if you want drama, There. Will. Be. Drama. So, sit back, relax, and add the following guests to your invite list. We’re sure you have the extra space in your venue, seating chart, and budget.

The Person He Used To Sleep With

Whether she was a one-night stand, a FWB situation, or a fling, everyone knew the two of them weren’t “studying” for finals together in the library. While they were never officially official, they were official enough to know what each other’s genitals look like, and that’s good enough for you. Whether you’re anxious for her to see the body you’ve been working on since saying “yes” in your custom gown, or you’re eager to watch her face fall during the first dance, drama is sure to surround her from her seat at the sh*ttiest reception table near the bathrooms and beyond.

The Person You *Think* He Used To Sleep With

It’s never been confirmed, but something about the chemistry they have has always made you wonder, and that kinda makes it even more infuriating. The hat stealing. The beer pong pairing. The big bear hugs that used to linger just a second too long. Whether you’ve asked and he’s denied (red flag), or you’ve accepted that you might never know the answer, you still have this feeling. So, if you’re looking for a dose of drama along with what could potentially be the most stressful day of your life, invite the wild card! Odds are she’ll show up in a bright red, low-cut, mermaid gown which was 100% made for the sole intention of stealing the spotlight. Should be fun!

The one you always kept on the backburner. The one who would pick you up from the airport at 1am and bring you soup when you were sick even though you never came close to even kissing him. Chances are you never even talked about his borderline obsessive feelings toward you, and you just reaped the rewards of being idolized. What? No one said you were perfect. While his/her heart will literally break into a zillion shards as you say “I do,” they’ll give you a bomb-ass gift, so there’s that. Plus, if your marriage goes to sh*t anytime in the next 50 or so years, you-know-who will be there to pick up the pieces, support you financially, and never ask for anything in return, God bless ‘em.

The Random Person Who Wanted To End Up With Him

Whether or not they dated doesn’t matter. In fact, whether or not they ever made physical contact doesn’t even matter. All that matters is that as soon as that bitch sees your man, her face lights up like the rest of us do when Kylie’s Lip Kits go on sale. For her, it was love at first sight. For him? He still can’t remember if her name is LaurA or LaurEN. While she’ll hover around the dance floor and insist on getting as many selfies with him as possible, she’s a silly, mostly harmless choice for a drama invite. If anything, seeing someone drool over your man while he’s completely oblivious might just make the coveted and mythical Wedding Night Sex that much better.

A Bonafide Ex From Either Side

These two didn’t just mess around every once in a while after one too many tequila shots when they were 19. They were the real deal. The hand-holding, Instagram posting, “considered getting matching tattoos before one of them realized that they obviously weren’t going to end up together and made some bullsh*t excuse like ‘my mom’s gonna kill me if she finds out’ because they didn’t want that permanent reminder on their skin for the rest of their lives” real deal. While they might not have been forever, they were “for a while,” and that’s enough to cause some good old-fashioned friction. There’s no way she, at some point, didn’t kinda-sorta-maybe picture walking down the aisle to your future hubby. Give her a good seat for the show and graciously thank her for coming. In the end, she’ll give you the best gift of all: Her cold, hard jealousy.

The One Who Got Away (On Either Side)

She’s not like, a regular ex. She’s THE ex. The one who, even after that sparkly brilliant cut landed on your freshly manicured fingers, you can’t help but occasionally compare yourself to after you’ve had 2.5 glasses of rosé. Or stalk her Facebook back to 2008. Or passive-aggressively like all of her sh*t from your burner IG account. I’m not saying you’re the consolation prize. Or second best. Or not quite as good as the girl he dated all through high school and the first half of college before she moved away and broke his heart. Of course not. Chill. But uh, now that you mention it, I’m also not not saying that either.

Whether it was your first love or his, walking down the aisle and seeing the face that could have easily been one of your ~forevers~ sitting in the audience (if guests at your wedding don’t feel like an audience, you’re doing it wrong) is a sure-fire way to cause an emotional sh*t-show. My money’s on the fact that before the cake is cut, you’ll be dreaming of going back on those “forsaking all others” vows and making out with Mr. Right Guy, Wrong Time. SO GLAD HE COULD MAKE IT THOUGH, RIGHT?!

From the HELPFUL comments about your cooking, the SWEET way she reminds your future-husband that she came first, and the WISE AND FASHIONABLE suggestions she has about your clothing choices, there are few people you’d rather run into car trouble on the day of. While you can’t imagine your day without her, sometimes you like to, just for fun. All of the other bitches above are just women you sometimes hate-stalk when you’re bored and occasionally dream about the joy you’d feel if their lives fell about. Your FMIL, however, is the one you truly hate to love. And the best part? She’s in it (and by “it” I mean alllll of your biz-niz) for the long haul. While the fact that she asked to wear cream to the wedding and attempted to go into the changing room with you during your bridal appointments makes your skin crawl, this is the one who, no matter how much you detest it, will end up with an invite. Whether or not that invite gets lost in the mail, of course, is entirely up to you.