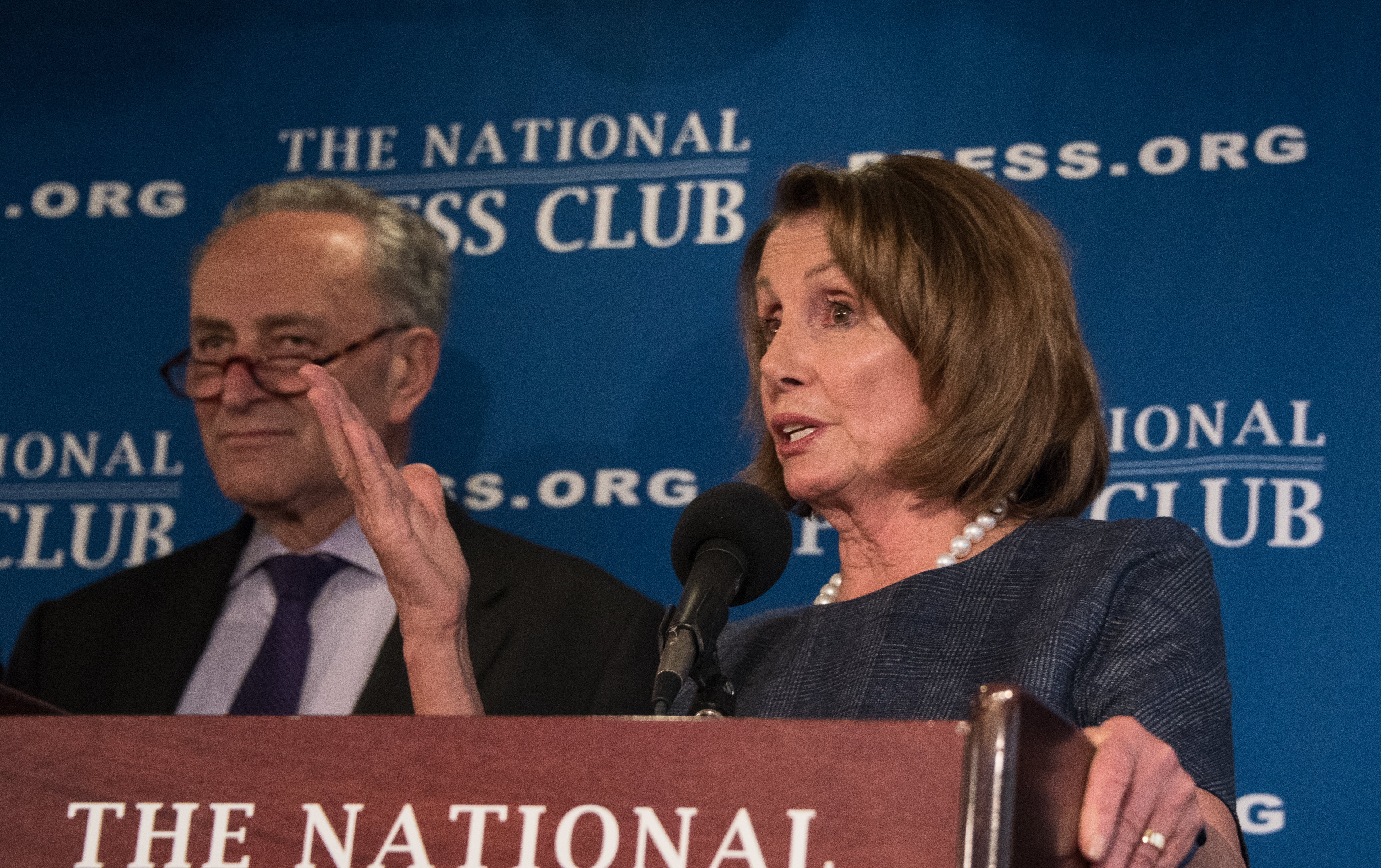 5 Takeaways From Trump’s Dramatic Meeting With Schumer And Pelosi

In this week’s ep of the most dramatic reality show ever made – our literal government – Trump met with Democratic leaders Nancy Pelosi and Chuck Schumer for a heated “conversation” about “border security” aka the wall. Pence was also there but like, barely. More on that later. Anyway, because Trump is president and nothing is normal, this meeting had a lot of moments that will either make you lol or make you stare out your window and ponder how humanity has gotten to such a low point. A true rollercoaster of emotions! Check out some of the wildest things you can takeaway from this meeting, and then go talk sh*t about our government to your coworkers in the break room. You’ll look like, really smart.

Our lady in blue is not f*cking around these days. Because it’s 2018, where sexism is still alive and well, Pelosi had to take on a more “tempered” manner during the meeting, while Schumer got to play bad cop. Like my mother whenever she notices I got a new crop top, Trump attempted to make a passive aggressive comment insulting Pelosi. “Nancy’s in a situation where it’s not easy for her to talk right now, and I understand that,” Trump said. Pelosi fired back with, “Please don’t characterize the strength that I bring to this meeting as the leader of the House Democrats who just won a big victory.” Now that’s a damn SLAY if I’ve ever heard one.

And our girl didn’t stop there. After the meeting, Pelosi had some more words for the press, which tried to call her out for not being transparent by not allowing the entire meeting to be recorded. Nancy told them that this was because she didn’t want to have to publicly say to the president, “you don’t know what you’re talking about,” on television and described the wall as “a manhood thing” for Trump. Okay…go off, queen!!!

Mike Pence showed up to do what he does best: literally nothing. The VP didn’t have much to say and was caught on camera closing his eyes – either to pray or to power down his hard drive. Maybe he was trying my go-to strategy, where if you just pretend something isn’t happening it will go away? Hate to tell ya, bud, but according to my current student loans bill, this tactic is not effective.

3. Trump Is “Proud” to Shut Down the Government

Trump and Schumer went back and forth arguing over who was responsible for shutting down the government last time. Trump tried to say it was Schumer, who was quick to point out,“Twenty times you have called for, ‘I will shut down the government if I don’t get my wall. None of us have said it.” Trump did NOT like that, and then walked himself into a corner by saying he was “proud to shut down the government for border security.” However, the best moment came when Pelosi referred to is as a ‘Trump Shutdown’ and Donald looked like he was literally going to implode. Did I mention Nancy Pelosi came to slay???

4. The Midterms Are Still Causing Drama

The 2018 midterm elections are a lot like my high school breakup in that neither party will f*cking drop it. Pelosi noted, “Sixty people of the Republican party are losing their offices now because of the transition.” Trump came back with, “And we’ve gained in the Senate. Nancy, we’ve gained in the Senate,” and continued with some additional points, “Excuse me, did we win the Senate? We won the Senate.” So sad that our leaders can’t get over a loss…and for the record, I broke up with Jimmy, not vice versa!!!

5. Having a Conversation With Trump Is Nearly Impossible

This is something we already knew, but somehow it’s always still shocking to watch happen. His tactic is to just repeat false statements over and over. Pelosi wasn’t having that sh*t, and kept bringing up that his factual evidence was not there, and they needed to have a conversation based on actual facts. Seems reasonable, no? Not when working with Trump. Pelosi tried to tell Trump that he didn’t have the votes he needs in the House (he doesn’t), and he kept insisting that he does and that he “could get it passed in two seconds.”

“If I needed the votes in the House, I would have them in one second, we’d be done. It doesn’t help because we need 10 Democrats in the Senate,” Trump said. “We’re doing this in a very friendly way. It doesn’t help for me to take a vote in the House where I will win easily with the Republicans.” Pelosi responded,“You will not win.” NANCY MOTHERF*CKING PELOSI, EVERYONE.