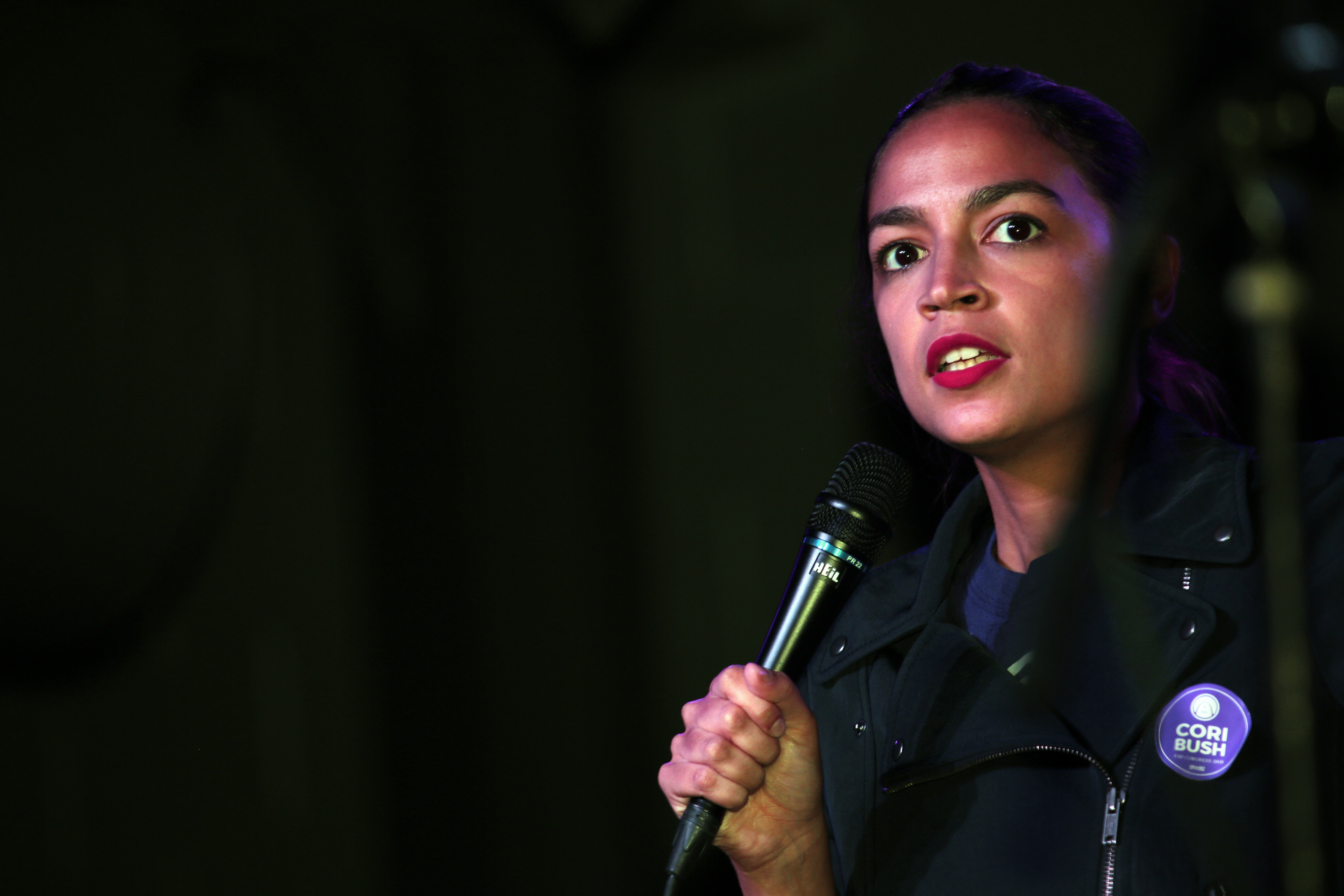 5 Progressive Women Who Could Be The Next Alexandria Ocasio-Cortez

When progressive Latina and bold-lip-wearer Alexandria Ocasio-Cortez won her primary against longtime Democratic Rep Joe Crowley, everybody lost their minds. What could this mean for the 2018 midterms? If a 28-year-old socialist can win her primary, should we be paying attention to other progressive women in their elections? Who is the next Ocasio-Cortez? And also, what lip color she use? The answers to both those questions are yes, and Still “Stay All Day” liquid in beso.

I have been getting many inquiries about my debate lip color in the last two days.

So who is the next progressive af lady candidate we should be paying attention to? I mean, probs all of them. But here are 5 we think have the potential to be the next Ocasio-Cortez. There are currently 435 members of the House of Representatives, meaning we have approximately 434 seats left to fill before there are a satisfactory number of progressive women in government. Then we’ll move on to the Senate…and the governorships and…you know…The White House.

Ayanna Pressley is a 44-year-old Boston city councilor who is currently looking to beat out a well-known white male incumbent in the primary for Massachusetts’ 7th District. Sound familiar? Pressley was the first woman of color elected to Boston’s city council and called Ocasio-Cortez her “sister in change,” which is incidentally what I call any girl who helps me freshen up my makeup in the bathroom.

Pressley is running against long time Democratic incumbent Michael Capuano and her primary will take place on September 4th. If you’re a Massachu-betch from the 7th district, check out her website here. Or if you’re not, you can still check out her website, and donate to her campaign.

This morning, I called for the defunding of ICE, see my full statement below. #abolishICE #ChangeCantWait #mapoli pic.twitter.com/oxjQvrRXjf

So we already know NYC can elect one millennial socialist Latina to government, but can they elect…two?!?! We’re gonna find out thanks to Julia Salazar, 27-year-old Democratic Socialist who is taking on Martin Dilan in a primary to represent the State Senate’s 18th district. The news literally can’t stop drawing comparisons between the two very different women (for one, Julia tends to do a nude lip) because they hold similar progressive values and are unafraid of ruining a pair of flats knocking on doors.

Salazar is challenging an eight term incumbent who previously represented her district for ten years on the City Council. According to Salazar, he’s also taken “an enormous amount of money from for-profit real estate developers.” Her primary is Thursday, September 18th and if you’re a NYC betch from NY’s 18th district, take a look at her website here. She literally says “tax the rich to fix the subways,” and after I read that phrase I blacked out and woke up donating to her campaign.

#CuomosMTA is hardly going the way of elderly riders and those with disabilities. A total of 640,000 New Yorkers are locked out of our subway system because their neighborhoods lack a single accessible station.

Stacey Abrams for Governor of Georgia

Stacey Abrams actually already won her primary well before Ocasio-Cortez, but the big test will be if she can actually win the election to become the next Governor of Georgia. If she does, she will be the first black woman ever elected governor in the whole damn United States. That’s right folks, we’ve had more governors that were former professional wrestlers, than we’ve had governors who are black women. Sit with that for a sec.

Abrams is the first black woman to lead either party in Georgia and she will face off against Trump BFF Brian Kemp in the midterms on November 6th, 2018. Georgia betches, you can check out Stacey’s website here, and register to vote here.

Georgia’s next governor must support small businesses across our state—including Amya’s Lemonade Stand in Decatur! Happy to invest in her #smallbiz with a “micro loan” and foster her entrepreneurial spirit. Go Amya! ???? pic.twitter.com/SMh2ZyB0pd

Let’s bring it back to Sex And The New York City for a sec to talk about the one and muhfuckin’ only Cynthia Nixon. She has been running a progressive challenge to NY’s Governor Andrew Cuomo that’s been gaining major steam, especially since Ocasio-Cortez (who she endorsed)’s upset. Cynthia is running on a platform of legalizing marijuana (gr8), ending mass incarceration (gr8er) and fixing the goddamn subway (gr8est).

The biggest test for Cynthia will be if she can actually beat out Cuomo in the primary on September 13th, 2018. Then there’s the pesky business of actually winning the general election, but if there’s any one we know can do it, it’s Miranda.

I believe health care is a fundamental human right. Yet many New Yorkers face skyrocketing costs and families continue to be uninsured.

Every New Yorker can have good health care, with no copays and no deductibles. That’s why I’ll create a single payer, Medicare For All system. pic.twitter.com/WUGK51KAHh

If you’ve been following Ocasio-Cortez on all social media (and I have) you’ll notice she popped over to St. Louis last week to Stan for another young progressive looking to unseat a Democratic incumbent in her area. Cori Bush is an activist and organizer who has also been a pastor and a nurse. (Meanwhile I can’t find time to both go to the gym and watch The Bachelor.) She’s looking to unseat Rep William Lacy Clay who has held the House seat for Missouri’s 1st district for seventeen years, and whose father had previous held it from 1969 – 2001.

Cori Bush’s primary is Tuesday, August 7th and she’s running on a platform of “jobs, justice, and medicare for all.” You can find out more about her campaign (and donate to it) here.

Breaking News: Conservative goes to our @CoriBush rally in St. Louis and… gets inspired? And then… gets uncomfortable… about being inspired by a Democrat? ???? https://t.co/PrOzylu95y

Okay okay New York we get it, you’re liberal. Treachout’s primary is the same day as Cynthia Nixon’s (say it loud for the New Yorkers in the back: September 13th), and she’s looking to become New York’s Attorney General. Treachout is no stranger to campaigns. She ran for NY’s 19th district in 2016 (but lost to Republican John Faso) and ran for governor in 2014, but lost to Cuomo in the primary.

Trechout is a law professor and constitutional law expert (so she’s like, really smart) who says her priorities as AG will be 1) leading the legal resistance against Trump, 2) cleaning up Albany corruption, 3) battling financial fraud and corporate scams and 4) making the argument against mass incarceration.

I am running to be the next Attorney General of New York. I accept no corporate PAC money, and no LLC money.

This is not complicated: No Attorney General should take money from corporations she is charged with overseeing & investigating & whose lawbreaking she may prosecute.

Once again, New Yorkers, that primary is on September 13th and everyone who is anyone will be voting in it. And that goes double for November 6th.

Well then it’s time to get your inspired (and gorgeous) ass to the polls. Betches is partnering with Rock The Vote to do just that.

The link above will take you to the Rock The Vote website where you can get registered and sign up for text message alerts about upcoming elections in your area. Never miss an election – or an opportunity to Instagram your “I Voted” sticker – ever again.