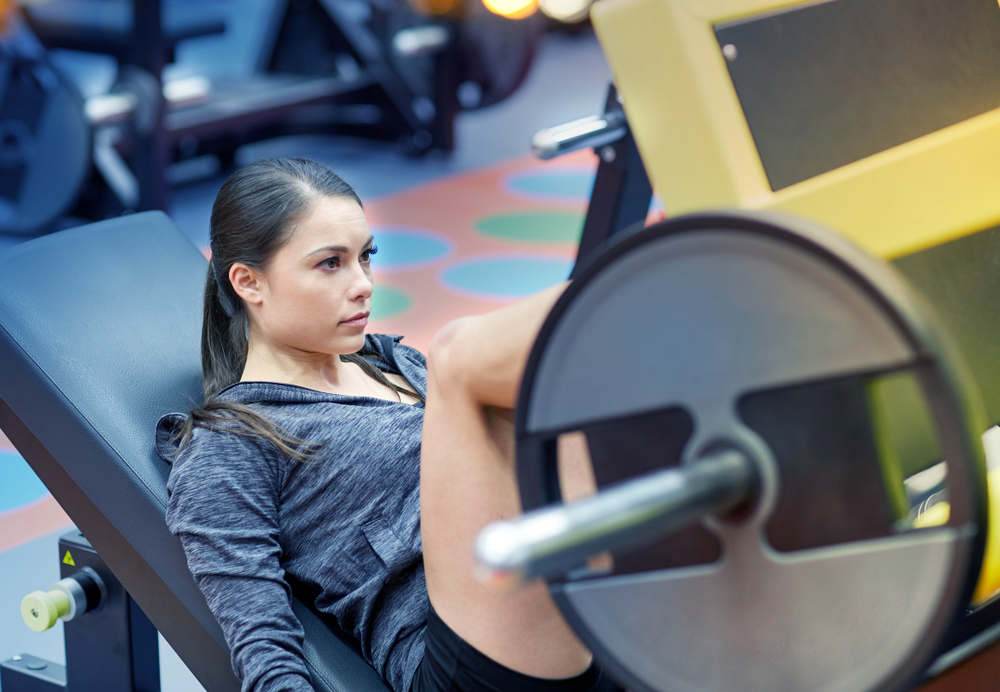 4 Exercises That Are Wasting Your Time, And 4 Better Ones

As a gym-goer (you cannot visit this site without being a member of a gym that costs almost as much as your monthly rent), you’re surely aware of the CrossFit-ization of our once-great nation’s fitness fanatics. This is largely bad, because it’s caused many a dork to delude himself into thinking that exercise is a sport in and of itself, despite their newfound quadriceps making them no better at hitting a baseball or sinking a free throw than they were back when they were getting picked last for grade school kickball. There is, however, one silver lining: the rise of “functional fitness,” i.e., exercises that actually get you in better shape.

Now, everyone’s living that #squatlife, even novices. Which is great! But for people just starting out, it’s sometimes wise to work up to an exercise before loading up a couple hundo’ on the olympic platform and deadlifting until you shit out your own colon. Those people can gently introduce themselves through modified exercises, colloquially called “modifiers.” This is also great , but the problem is that not all modifiers are created equal. I’ve put together a list of popular “functional” exercises, the most common modifiers, and better alternatives for people who want to get Khloé Kardashian’s bod without the ass injections.

Before there was such a thing as “plank,” everyone else knew it as “the top of a fucking push-up.” With your body taut, feet together, and your hands underneath (and roughly as wide as) your shoulders, lower yourself until your chest jussssst touches the ground, and push back up (hence the name!). It’s a great way to build strength and endurance in your chest, shoulders, and triceps, and it involves core and stabilizing muscles in ways that machines and even free weight exercises don’t. Unfortunately, because God knew damn well that men would be insecure as hell, he blessed us with naturally superior upper-body strength that makes these a breeze—but lots of women might find them difficult.

I don’t mind knee push-ups, which I’ll get to in a second. The bigger problem is that I’ve noticed some trainers/online fitness idiots recommending women instead do push-ups on their feet, only going “as far as they can,” i.e., about halfway. This is bullshit. You wouldn’t do half a squat, half a bicep curl, or give half of a hand job and declare it “the same as the real thing,” would you? I sincerely hope not, otherwise you are WEAK and/or bad company in uncrowded movie theaters.

The key with push-ups is that they get harder the smaller the angle between your body and the ground gets. Ergo, instead of doing 15 half push-ups and fucking off to the juice bar or whatever, find a way to elevate your hands. Every gym has some of those aerobics platforms for old ladies that you can stack about 18 inches high. If that’s still too hard, grab a weight bench or even a low wall and perform the motion with good form. As you get stronger, lower the platform. Kneeling push-ups should actually be your last step on this journey. Basically, if you can perform 15 or so push-ups at your current level of assistance, it’s time to lower your angle. There’s still a decent jump from kneeling to actual push-ups, in which case it’s totally fine to start out on your toes and drop to your knees as needed to finish the set.

Ah, squats. They’re the foundational exercises for every THOT who gets fired from Panera and decides they’re going to start a #fitspo Instagram—and tbh, they should be foundational for everyone. Resting a weighted bar across your shoulders as high up as your trapezius muscles will allow, stand with your feet shoulder-width apart and toes pointed slightly out. Drop your butt back and down, feeling as though there’s a string pulling your head upward as you drop your ass as low to the ground as possible. Get the crease in your hips at or below your knees before extending from your heels back to full height. It’s a MONSTER exercise for your entire lower body, but not everyone is ready to step into a squat cage with all those meatheads flexing and milling about. Plus, even just the 45-pound bar can be a lot for newbies, and a lack of trapezius muscles can make it uncomfortable.

This is that big contraption where you lay down in a recumbent position near the ground, using your legs to push the weight out and away from you. You feel like an absolute GOD on this machine, because even fairweather gym-goers can put up solid weight. The problem? It fucking sucks. For starters, it’s the opposite of “functional”—of course you can push a lot of weight when you’re braced against something solid, but do you envision a situation where you’ll ever be lying on your back and have to leg-press a Toyota? I sure hope not. What’s worse, it can genuinely and sincerely fuck up your back six ways from Sunday. Do you want to spend the rest of your life walking around like that? Hell no.

I’m tempted to include dumbbell squats here too, because there’s nothing wrong with those as exercises on their own. But if you really want to prepare for the squat cage, the hack squat machine is your friend. It’s that machine usually located somewhere near the leg press that looks like a medieval torture device, except it’s anything but. Load on an experimental amount of weight, settle your shoulders into the cradle, and use the levers to unlock it. Making sure you place your feet so that your knees don’t extend too far out over your toes, lower yourself as low as possible, just like a real squat. The beauty is that it does a much better job of simulating the movement, and if you get stuck it’s easy to lock the machine and bail out (plus, everyone’s too busy herniating their spines on the sled so it’s always open). It’s kinda tough to determine how much weight you’re pushing because of the angle, but I’d say that if you get to a point where you can do 8-10 good hack squats with 100 pounds on the rack, you’re ready to move to the cage.

I probably don’t need to explain pull-ups too much: grab onto a bar/rings/the skid of the helicopter with which terrorists are trying to abduct the president, and pull yourself up until your chin reaches or passes the bar. There are any number of hand positions you can use to make the exercise easier or harder, but that’s not the point. The problem is that I would wager most men can’t do more than one or two pull-ups, to say nothing for how hard it is for most women. Honestly, you may never be able to do more than one, if any. But that’s ok! It’s still a goal to work towards.

This is the rig usually found on the end of a larger cable machine: a seat with pads to hold your knees in place, with a pulley above with a bar that you pull down to your collarbone (or behind your head, if you’re feeling spicy). Like a lot of modifiers, there’s nothing inherently bad about it—it is, in fact, a great way to strengthen your lats, and your lats are a big part of a pull-up. But it does fuck-all to simulate a pull-up, and that’s what we’re after here. We can do better.

There are two mechanisms for this, and they’re kind of a progression. The first (and easiest) is a machine specifically designated for assisted pull-ups: select an amount of assistance to counteract your own body weight, either step or kneel onto the assist bar/platform (depending on the design), and get to pull-uppin’. Even in machine form it’s better than a lat pull, because you’re moving your body through space. It’s also closer to how your body actually moves on a bar, i.e., no excessive leaning back like you see people do on the lat pulls. The second option is to use a pull-up assist band (or collection of bands) on a by-God pull-up bar: attach the band according to the instructions, rest your knee or foot in the loop, and do pull-ups as the elastic gives you a little boost. This is just like doing real pull-ups, because your body can swing freely just as it would with no assistance at all. Real talk, if 6-8 band-assisted pull-ups are as far as you ever get, you’re still doing better than 90% of the population. No shame in that game.

If squats are the NY style pizza of exercises (iconic, foundational, and unimpeachable), then deadlifts are Chicago deep dish—similar yet a little different, but no less important. With an olympic bar at your feet, stick your butt out and squat down as far as you need to grab it with extended arms. Then, keeping your chest high and your back straight, again feel that string pulling your head up as you push through your heels back to upright. The bar should ride jusssttt in front of your shins, and finish on your thighs. It’s not entirely un squat-like, but a) you aren’t squatting as deep, and b) because the weight is in front of you, it works the back of your body more—specifically the glutes, hamstrings, and lower back. It does, however, present similar challenges to squats: big scary weights and the people who use them, and discomfort (this time, in the form of potentially skinning your shins with the bar).

If you’ve ever worked with a trainer, you may have used this device. A closed hexagon with extensions for barbells on either side, you step into it, reach down and grab the handles, and then do your deadlifts that way, avoiding unpleasantness like the olympic platforms and skinned shins. Easy, right? Wrong. While the hex bar is great for big dudes who want to do shrugs, it’s no good for deadlifts because you’re not doing a deadlift at all—because the bar moves the weight from in front of you to in-line with your center of gravity, what you end up doing is a glorified dumbbell squat. A fine exercise, but not what we’re after here.

I’m breaking the theme here because this doesn’t exactly mimic an olympic deadlift, but remember what a deadlift is supposed to work: the hamstrings, glutes, and lower back. The only reason a regular deadlift involves the quads is because you have to squat down to pick it up without fucking up your back, but there’s no need to do that to hit the core areas. Grab a couple of reasonably heavy dumbbells (IDK, in the 20-pound range to start?), and stand with them in front of your thighs, palms facing in. Let the air out of your knees (i.e., don’t lock them out, but don’t bend them either), and bend from the waist, moving your butt out and back and keeping your back straight, feeling like your chest is high. The dumbbells should track pretty close to your legs the whole time, as they would if you were doing these with a bar. To start, you might want to do these sideways in front of a mirror—watch yourself, and as soon as you see your lower back start to round, that’s as far as you can go. You’ll be able to go deeper as your hamstrings stretch and get stronger, but for now take it slow. You should feel your quads brace as you go down, but on the way back up you should feel a deliberate pull from your glutes and hamstrings. I think if you get to a point where you can do a few sets of 10 reps with 35- to 40-lb dumbbells in your hands, you’re more than ready for the bar.

This girl actually goes a little too far, note how her back starts to round.