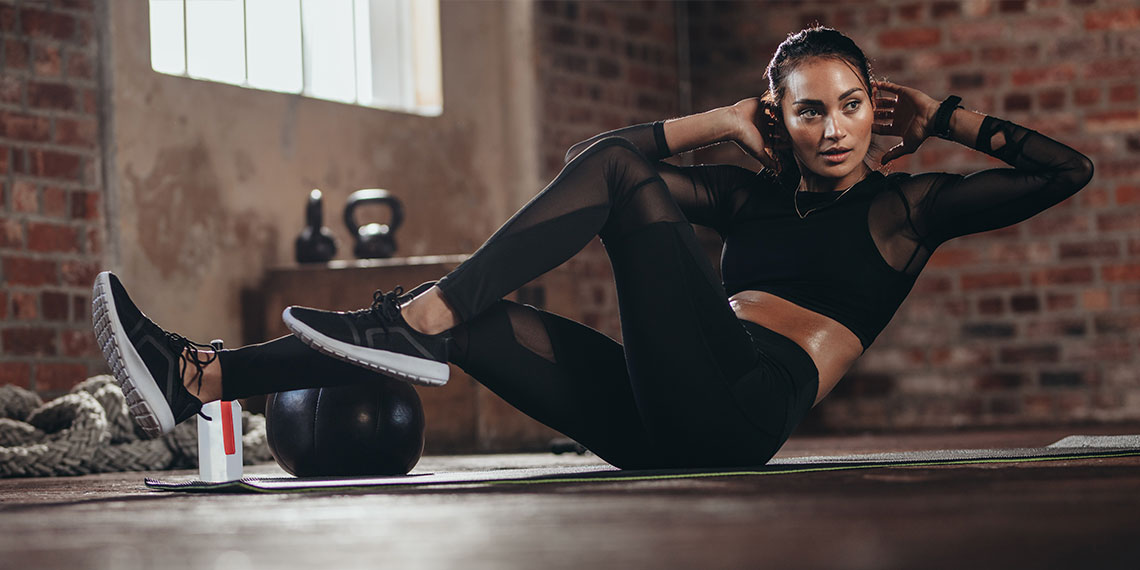 3 Exercises You’re Probably Doing Wrong, And How To Fix It

While I totally support not giving a sh*t about how you look at the gym, I mean don’t worry about sweating and wearing that old sorority date party tank. You still need to care about what your form looks like. If you’re not performing an exercise right, at best you’re wasting your time, and at worst you’re going to injure yourself. This is not limited to the weight machines, either—some of the most common bodyweight exercises you’ve probably been doing for years are the ones that people mess up the most often. Read on for the exercises most frequently done incorrectly, according to Los Angeles based trainer and founder of KICHGO, Kit Rich, and how to fix your form.

If you’ve ever taken a workout class and done crunches, you’ve probably been told to keep your elbows down and away from cupping your ears. That’s not just for aesthetics: scrunching up puts pressure on your neck, causing tension and stiffness. Another common mistake: rocking your hips back and forth too much, because it looks stupid and hurts your back. Basically, if you’re feeling strain or moving a lot in any area that is not your abs, you’re not doing it right. Also, that’s never going to get you that ab crack.

DO IT RIGHT: Unless you’re trying to get a thicc neck (you do you), don’t pull or twist from the neck and shoulders. Keep your elbows pulled down and think about keeping your back flat and lifting through the shoulder blades, which is the opposite of hunching over. In your bicycle crunch, keep your hips stable by extending your legs forward from the hip, keeping them low and parallel to the ground. Think of it more like a lengthening motion than pedaling motion—this is what’s going to target your lower abs and obliques.

Planks are awesome. Not only do they strengthen every muscle in your core at once, but you don’t even have to move while doing the exercise (my favorite kind). However, because you’re holding the position for a while, it can be easy to slip out of good form once you start getting tired. Sticking your butt up or arching your back will take the work out of your abs and will give you back pain, and that’s not what we want.

DO IT RIGHT: Because planks are hard in general, you may not be able to tell by feeling whether your hips are too high or low, but a quick peek in a mirror will make it obvious. It’s called a plank because your back and shoulders should be as flat as a board, so try to visualize that line from your shoulders to your heels the whole time you’re holding the position. Hold your gaze a few inches in front of you instead of directly under you to keep your neck neutral. Finally, squeeze your butt and thighs as well as your arms and abs to help keep the straight line. Start off with a 30-second plank to make sure you’ve got it down before moving on to longer holds.

Push-ups are hard, but don’t sleep on them—they’re great for working out your arms without using additional weights. You’ve probably f*cked this up before, so you already know what it looks and feels like: tucking the chin and looking down, moving your shoulders up and down one inch and calling it a push-up. You’re going to hurt your neck and shoulders that way and not get any benefit to your arms. Remember, a push-up is really just moving your plank up and down, so if you’re teetering out of your alignment, it’s wrong, wrong, wrong.

DO IT RIGHT: Don’t try to act cool. If you can’t do a full push-up right now, start by doing modified push-ups on your knees. In the modified push-up, be sure to keep your body in line from the back of your head to the back of your knees instead of bending at the waist when you push down. Extend your arms out wide (slightly past your shoulders) and ground your hands into the floor to firmly support the rest of your body. Bring your chest all the way down to tap the floor and back up. Do this with straight arms and with your core engaged the whole time. When you feel something in your abs as well as your arms, you’ll know you’re doing it right.

THE TAKEAWAY: If it looks weird or feels weird, it probably is hurting more than helping. Slow down, modify, or do fewer reps at first and then work your way up.