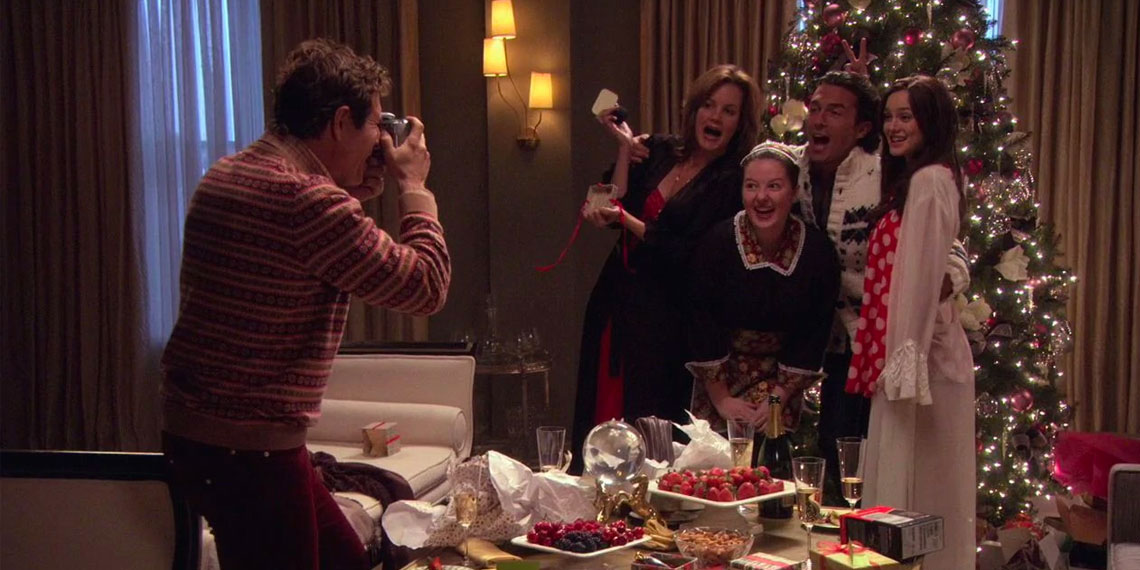 Every holiday movie has the same plot: girl unexpectedly meets boy, boy falls in love with girl, something tragic happens, boy and girl profess their feelings, they kiss passionately against the backdrop of a professionally decorated Christmas tree with fake snow falling around them. Yawn.

Although I usually put up with that cookie-cutter plot every year, I decided to try something a bit different (and way more entertaining) this December: re-watching the holiday episodes from my favorite TV shows.

Given that basically every holiday party is canceled, in-person shopping is hardly a thing, and the gyms are closed (although let’s face it, I wouldn’t be going even if they were open), I had all the time in the world to cuddle up with a weighted blanket and a (spiked) hot drink and laugh, cry, and feel all sorts of emotion while watching classic shows like Parks and Recreation, Gilmore Girls, and 30 Rock.

As my wonderful gift to you, I’ve listed the best holiday episodes from all our favorite shows so that you too can fill your time this December with something other than watching people’s annoying Instagram Stories and cringey attempts at creating Reels. Enjoy!

There is literally nothing more relatable in these COVID-19 times than having your holiday plans ruined, your vacation canceled, and you therefore not being able to post that thirst trap bikini pic in December. Call me a masochist, but that’s why I loved re-watching this episode of New Girl. I got to commiserate, emphasize, and shout “HA! You got screwed too!” at the TV when Jess, Nick, Winston, and Schmidt’s holiday flights were canceled.

It’s as if Tina Fey knew we needed something to prove that there are families out there more dysfunctional than our own when they created this episode. In the most hilarious way, we see the picture-perfect Lemon family break down after an outing with Jack and his mother, and the TGS crew have their party plans hijacked by Kenneth. Plus, I promise this is the exact Rockefeller-related holiday content you need to get that sad excuse for a tree they put up this year out of your mind.

Confession time: I completely forgot about The O.C. until I Googled “shows like Gossip Girl” this summer… and then promptly re-binged it with no regrets. And one of the most entertaining, dramatic, and heartwarming episodes happens to be a holiday one, where Seth introduces Ryan to the wonders of Chrismukkah and struggles in a love triangle between himself, Anna, and Summer. I have to admit, seeing a love triangle that didn’t involve me, my fridge, and Netflix was actually pretty refreshing.

‘Keeping Up With The Kardashians’ – “Christmas Chaos” Season 16 Episode 9

Being invited to the Kardashians’ annual Holiday Party is on my bucket list, Amazon wishlist, and in my letter to Santa every year. Is there anywhere else I can add it at this point? But while my invite is still lost in the mail, the next best thing is to watch the party unfold on TV. And I promise you, this is one of the most iconic holiday episodes ever. It’s the one where Kim is literally quoted saying, “This is so inappropriate. It is so so much money for one night.” Do I need to say more?

We’ve all been that psycho b*tch, but in this episode Michael takes crazy to a whole new level. How? By Photoshopping his face onto his girlfriend’s ex-husband’s body in one of their old family photos, and sending it out as his Christmas card. And, no spoilers, but this episode includes some major Pam vs. Angela drama and a classic Jim prank on Dwight that will make you forget about TikTok for, like, 20 minutes.

Some things are just the f*cking worst until someone comes along and makes it special for you (like Valentine’s Day, for a totally random example). And that’s the case for Lorelai and her feelings toward snow in this episode, until Luke surprises her with a romantic snow-related gift that made even a Grinch like me say, “AWWWW!”. Beyond the snow drama, this episode also features the cutest little stray dog that brings Emily and Richard together in a true holiday miracle kind of way.

You know that friend who waits until the last possible moment to buy their presents? Well, be prepared to watch Joey and Chandler do that exact thing… and be forced to buy their gifts at a place I only go into when I really need to pee during a road trip. And, as if that’s not enough comedy, what screams tradition more than some classic Ross and Rachel drama? Be prepared to get your fill of it this episode.

I’ve watched this episode about 14 times, so at this point let’s just say it’s a holiday tradition. I swear, no matter how many times you see Blair come up with a conniving plan to break up her Dad and his boyfriend, the story is guaranteed to transport you from your burrito-stained sweats and unmade bed to the Upper East side within moments. It’s the exact escape you didn’t even know you needed.

Picture this: Schmidt shirtless, wearing just a Santa hat and Santa shorts. If that’s not enough to convince you to re-watch this episode, keep in mind that the theme is how dealing with new relationships around the holidays is stressful AF (relatable, right?). Like any New Girl episode, this one will have you laughing at the lovable, entertaining, and slightly inappropriate trouble the crew gets themselves into at Schmidt’s office party.

Even though the holidays may suck more than usual this year, just know that for the first and probably only time in your life, your holiday season is going better than Lori Loughlin’s. And speaking of which, this episode of Fuller House is sure to bring a smile to your face, despite how cheesy the plot is. The most relatable part? Tommy throwing a tantrum in the mall. Been there, done that (and over much less, if I may add).

Are you one of those people who re-gifts an old box of chocolate or nauseating-smelling candle to your co-workers every year? If you said “yes”, you seriously need to take notes during this episode. While Leslie is off work for two weeks, Ann rallies the Parks department to create a special holiday gift for Leslie. As cheesy as the gift is, it’s actually pretty sweet (pun intended) and will probably make you feel as warm and fuzzy inside as the spiked eggnog you’re sipping.

There’s something about watching Ally McBeal that brings back all sorts of early ‘00s nostalgia. And this episode gives us just that against the backdrop of a hectic office during the holidays (TBT to offices), and plots about Ally being her usual badass self and the romantic troubles the couples in the office are facing. I won’t reveal if there are any holiday miracles at the end of the episode, but I can safely say you’ll be feeling emotions far from the disappointment Kyle Richards felt when she realized bangs just weren’t her thing.

If you want to escape the stressful bullsh*t of your family’s holiday Zoom call by finding another family going through equally dramatic times, look no further. In a mix of both hilarious and feel-good storylines, you’ll get to emphasize with the Dunphy kids as their parents cancel Christmas until someone fesses up to ruining their sofa. Plus, you get to see what happens when Cam and Mitchell say something we’ve all thought at least once in our lives: “this mall Santa is just not jolly enough”.

If you’re the kind of person who gets pissed when people leave their holiday decor up way past December, this episode will make you feel more seen than ever. Now bear with me, because this episode is actually more about Valentine’s Day than Christmas, but it still delivers an accurate depiction of how crazy people get around any holiday.

Amy’s weird-yet-adorable admiration for Captain Holt is somehow one of the most entertaining things to watch (because who TF actually likes their boss?). And as odd as their relationship is, this episode delivers just the right amount of it, showing us Amy working hard (but hardly working on her actual work) to get around Holt’s “no gift” policy. And, to quote the queen of the holidays, Dorinda Medley, we see Jake “make it nice” with his nemesis/best friend Doug Judy in order to gather intel for Rosa.