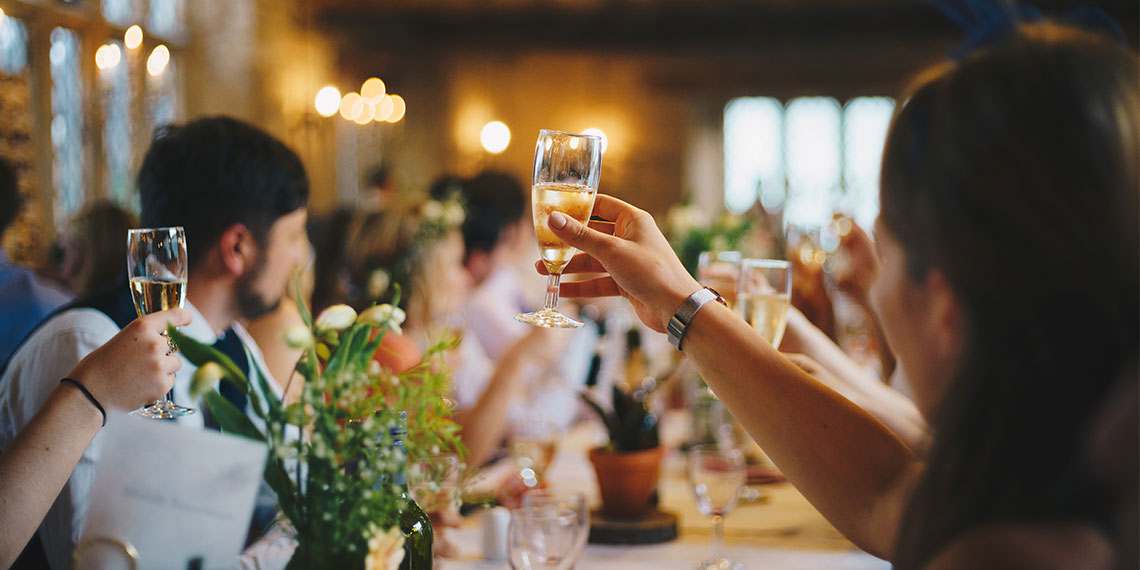 10 Things You Should Never Say In A Wedding Toast

If you’ve been asked to give a wedding or rehearsal dinner toast, there is one very important thing you must remember, no matter what: It is NOT a roast. No matter how tempted you are to throw out some inappropriate jokes, lock it up for the next few minutes and try to act like an adult. You’re not a stand-up comedian. Please just keep it short, sweet, and unlikely to embarrass the bride’s extended family. I know that giving a speech is hard, especially in front of people you don’t really know, but this is not really the time to trot out the strategy you use on awkward dates and just deflect with inappropriate humor. The good news is, if you avoid saying the following things, your toast is likely to be a huge success.

Imagine having the responsibility to give a toast at Kanye West’s rehearsal dinner.

1. “I Never Thought This Day Would Come!”

While this may actually be true because your BFF literally had no game in college (did you, though?), avoid this one. There’s no way for this comment to be taken as a compliment, and the crowd won’t know how to react. After all, this day did come, so clearly you were wrong.

2. “Funny Story, The Bride Used To Have A Huge Crush On The Best Man!”

you want me to write a wedding toast? oh, i thought you said wedding roast…

no, it’s no problem at all…

Can we say AWKWARD? That is definitely a story that should not leave the bachelor/bachelorette party (regardless of whether it took place in Vegas or not). It’s weird to hear about anyone the bride or groom dated in the past in a wedding or rehearsal toast, and even more so when he or she’s sitting right there. Also, it accomplishes nothing except making everyone really uncomfortable.

While this is factually accurate, Lizzo said it best: Truth hurts. And a wedding is not a day you want people to feel hurt. It’s a day to be hopeful, optimistic, and excited about the future. Maybe, just this once, don’t keep it real.

4. “I Am FEELING These Signature Cocktails.”

The bartender might be making those Moscow mules very strong, but try to save the binge drinking until after your speech. A few glasses of champagne for liquid courage is not a bad idea so you don’t sound like you’re giving a presentation to your boss, but save the hard stuff as a celebration for nailing your speech so you don’t make an ass of yourself in front of 200 people.

5. “People Always Thought I Would Get Married First.”

Generally, talking about yourself in a wedding speech is a no-no, unless it’s related to the couple, and advertising that you were initially ahead in the race to the altar is just plain weird and irrelevant on your BFF’s wedding day.

6. “Who Wants To Take Bets On When They’ll Have Kids?”

The only thing more annoying than people asking when you’ll get engaged is being asked when you’ll have kids. There are so many reasons why this is NOT okay, so just avoid the topic altogether and save yourself an ass-kicking from the newlyweds.

8. “He Was So Hammered The Night He Met You, I Can’t Believe He Even Remembered Your Name!”

Again, save this for the bachelor/bachelorette party. The couple’s grandparents don’t need to know that they met during an intense game of flip cup that ended in a one-night stand. Something like “they met at a college party” is about all the information they need to know. Keep it PG and save the couple from some major embarrassment.

9. “We All Know Dave’s Parents Didn’t Love Jenna Right Off The Bat.”

Again, this is just you asking for an awkward silence. It’s not funny, it’s completely irrelevant to whatever you’re going to say next and will most definitely put a damper on the rest of the night.

This is just a terrible way to end a speech and you should absolutely NEVER do it. EVER.

Above all, if you have to get a second opinion on whether your joke is too “edgy”, just don’t do it. Anything that is going to make the bride or groom feel self-conscious or bad about themselves, definitely don’t do it. And also, don’t get so drunk that you are incoherent. The bar is actually not that high! You can do this.