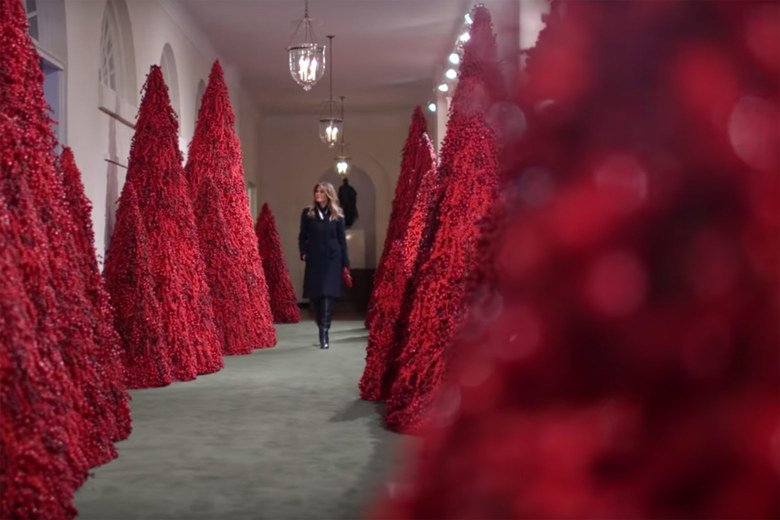 Wtf Is Up With Melania’s Scary Christmas Decorations?

Christmas used to be a magical time of year when you’d spend time with family and eat pie for breakfast. But now it is ruined. No, it’s not ruined in the way that your racist uncle thinks it’s ruined. (IDGAF if people say Happy Holidays or whatever.) As long as I’m off work, people can say whatever the hell they want. But the reason Christmas is ruined is actually coming from…inside the White House.

Melania Trump upheld one of her contractual FLOTUS duties and debuted the White House’s holiday decorations which are more of an affront to the Lord Baby Jesus than any PC-holiday language or red cup could ever be. Instead of a traditional press preview, she stayed true to her family name, skipped that, and tweeted out this short video:

The People’s House @WhiteHouse is ready to celebrate Christmas and the holiday season! pic.twitter.com/oejKW3mC15

The official theme is ‘American Treasures’ which must be an homage to the last remaining precious trees rescued from West Coast and decorated for the East Wing. Also, this family simply cannot have a theme that doesn’t reference wealth in some way.

Then we have the hall of bloody horrors, or as her offices spins it: “The choice of red is an extension of the pales, or stripes found in the presidential seal designed by our Founding Fathers. It is a symbol of valor and bravery.” Or, they didn’t know what to do with all that blood on their hands from teargassing innocent children and families so they got crafty with it.

Melania looks like she is genuinely lost in a forest and trying to find some Narnia closet to escape out of.

We can’t overlook the wreath of Be Best pencils that no one wanted to use so they gave to a second grader with a Pinterest account.

What Does The Internet Say?

As with anything Melania and/or Trump related, the internet memed this sh*t fast and the results honestly count as the first gift of Christmas. You know what they say, “On the first day of Christmas Twitter gave to me / 1,000 Melania blood tree memes!”

It’s that time of year at White House … pic.twitter.com/7BEQ28neLj

“Wouldst thou like to deck the halls deliciously…?” #WhiteHouseChristmas pic.twitter.com/8TrGLzIlAL

And of course, we had to get into the Melania meme game too (out of respect for the meaning of Christmas, naturally)…

It’s clear that Christmas has been hijacked by the radical right and that as normal, rational people we must fight to return this holiday to it’s original meaning: texting your high school friends about what bars to get trashed at while you’re all home, and swiping left on dudes from your high school as an act of dominance.