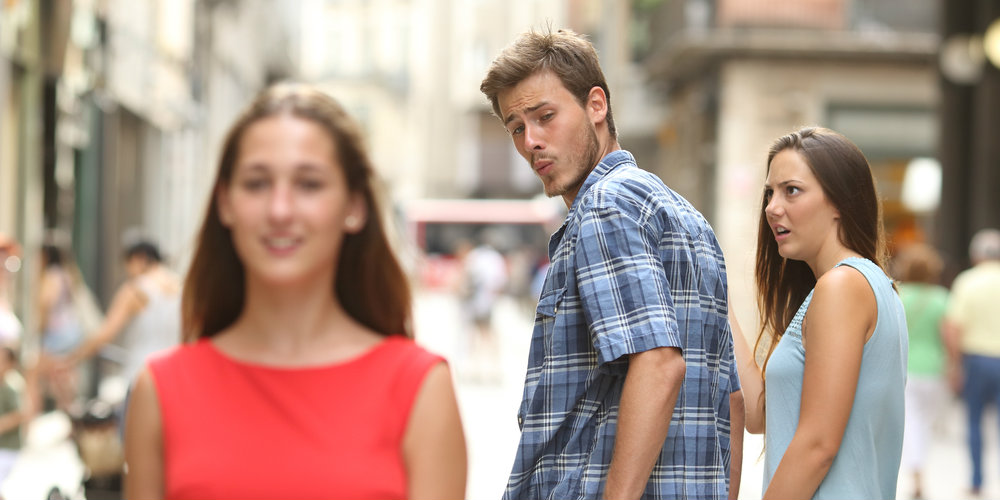 What To Do When Your Friend’s Boyfriend Flirts With You: Ask A Pro

Head Pro will only flirt with your friends in private, like the extremely women-respecting gentleman that he is. Email your questions for him to [email protected], and follow him on Twitter and Insta at @betchesheadpro.

As much as I love this column I never thought I’d have to write in to it, but here it goes. For clarification, what’s done is done, but I need to know if/how I could have handled this clusterfuck of a situation differently.

I recently handed in my notice and will be moving out of the country, so with a month left, I thought I’d fire up the swiping apps and have some fun. I ended up meeting this guy for drinks who I found myself really physically attracted to, though I knew he was just looking for a fuck buddy and took my leaving the country soon to mean I’d be down too. I wasn’t sure how I felt about it but I’ve never really thrown caution to the wind so I decided to go with it.

I first met him on a Tuesday. Flash forward to Friday and we’ve been texting all week. I get a bit drunk and so does he and we end up going back to my place and having sex. To be honest, it wasn’t mind blowing, and at one point he jokingly told me I was ‘not even an object, an inanimate object,’ but I let him stay until morning and give me massages/cuddle because why the fuck not.

After that we continued our texting through the week, though he wasn’t exactly jumping on the opportunity to see me again. Finally on Sunday afternoon he asks if he can come over and against my better judgment I say why not. When he arrives my roommates are all home and I tell him it’s too awkward, so we go for coffee where he’s simultaneously all over me yet talking about his ex gf and how hard it was to break up with her A YEAR AGO….please. Just when I’m thinking OK, it’s fine, we can just go back to my place and fuck and at least I’ll get something out of it…the crimson wave arrives. Great.

I was so awkward about it that I still brought him back, ended up just making out with him and cuddling and pretending like I just didn’t want to do anything more. When he said he had to go, I begged him to stay like some kind of psycho girlfriend (why did I do this?! I have no idea?). Unsurprisingly, after that performance he texted me saying “You’re nice and that was nice, but I don’t think we should see each other again. We’re clearly very different people looking for different things right now.”

My question: am I a total psycho for what I did having him come over for a presumed booty call and then pulling that shit? Why, if I knew this was just gonna be a fuck buddy situation, didn’t I just leave it? The entire thing is so unlike me and I feel completely mortified/confused.

Someone who needs their citizenship revoked

Lmaoooooooooo. No, I don’t think you’re psycho, but you’re not, like, not psycho? I think we sell a shirt for people like you. And not for nothing, this guy sounds like he has a whole shitton of his own issues, without the excuse of an impending move overseas. Like, what’s your excuse for calling a willing sex partner an inanimate object, fucko? And I’m sorry, if a grown man over age of, oh, 25 or so can’t get over an ex within a year, he’s fucked up. We should implement a nationwide minimum swiping age of 30. I fully expect the NRA’s support in this initiative.

Anyway, some people respond to uncertainty by clinging to routine. You, apparently, do like the COMPLETE opposite and try some shit you wouldn’t ordinarily try. I think that’s ok. Most of us would probably be better off using big life changes to try new things, provided those things aren’t black tar heroin or thinking you can pull off bangs. Really, all this ended up being was you misreading a dead-end hookup situation and biting off a little more than you could chew—what little plan you had fell apart, and you short-circuited in the moment.

I’m no doctor, but I think that’s basically it: looming uncertainty about a new chapter in life combined with the uncharted waters of the NSA hookup scene. At least you managed to kill two (or more?) birds with one stone, and have learned the perils of being a clinger.

A few months back, my friend starting dating a guy she met on Tinder. After a few hang outs, she invited me to meet him and I immediately received flirtatious vibes from him. The next time I saw him, about a month later, he was openly flirting with me at a party while my friend was in the other room. He kept finding ways to touch me or to make me touch him (“feel my hair, there’s like no gel in it!”). When his girlfriend (my friend!) sat on his lap, he made seriously creepy eye contact with me.

I always try to brush it off, assuming I don’t really know him and perhaps it’s just his personality, but many of my other friends have noticed him staring at me or talking to me for too long or finding a way to bring me up in conversation. We’re now at the point where everyone but his girlfriend notices his behavior.

Here’s my question: do I bring it up to her and risk losing my friend or do I try to let it go and continue to act oblivious? Better yet, should I bring it up to him? What would I say in either of these scenarios?

I’m not sure how long they’ll last, but it doesn’t seem like he’ll be going anywhere any time soon.

Thanks for your help!

Ok first of all (and I mean no offense by this), if you’re getting flirty vibes after seeing him a month apart, I gotta assume it has a lot more to do with him than you. Like, the odds that he’s just flirting with you and not other people in that timeframe are extremely low. Unless your friend is dating a horny 13-year-old boy and is ALSO a bridge troll (who he’s dating for some reason, probably because she buys him beer), there’s no way he’s carrying a torch for you (and only you) for that long. I think you’re dealing with a standard-issue creepy person.

Regardless, no, you can’t say something. If you do, all your friend is gonna do is immediately accuse you of coming onto HIM, which is obviously untrue but people tend to trust the people they’re fucking. And don’t get grand visions of forming a united front and intervening that way, either—someone (possibly several people!) in the group likely doesn’t see his creepy advances in as poor a light as you do, and would probably defect and take her side in the argument. Oh god, that would be so much worse. Because then EVERYONE thinks you’re horny for him, and it would eventually get back to him, and then next time you see him (if you’re not ostracized from the group), he’d think he was Matt Dillon in Wild Things. “Matt Dillon in Wild Things” is how every creep ALREADY pictures himself, and you don’t wanna fuel that fire.

Instead, I would do your best to give him the benefit of the doubt and view him as one of those assholes who’s “just really friendly to everyone!” You know the type—guys who hug every female friend they have (why no love for the bros, Sir Hugs-a-Lot?), sound like politicians whenever they talk to new people (“so like, tell me your story”), and generally try to endear themselves to everyone by being insufferably, performatively nice. These guys are almost exclusively under 5’10” tall, for some reason.

If you can do that, you can practice the standard neutralizing tactics practiced by quasi-introverts like myself. Avoidance is the general rule; specifically no touching. His cringeworthy “touch my hair” bit is actually perfect, because you can dodge it without looking like a dick (unlike, say, a hug). Just be like “cool, yeah, I can tell” and refuse to play along further. Those people HATE when they can’t dictate the terms, and will usually lose interest if they feel they don’t have you under their spell anymore.

Also, figure out a way to get your friend to stop sitting on his fucking lap in public. This is a group outing, for chrissakes.

Head Pro will only flirt with your friends in private, like the extremely women-respecting gentleman that he is. Email your questions for him to [email protected], and follow him on Twitter and Insta at @betchesheadpro.
Images: Shutterstock; Giphy (2)