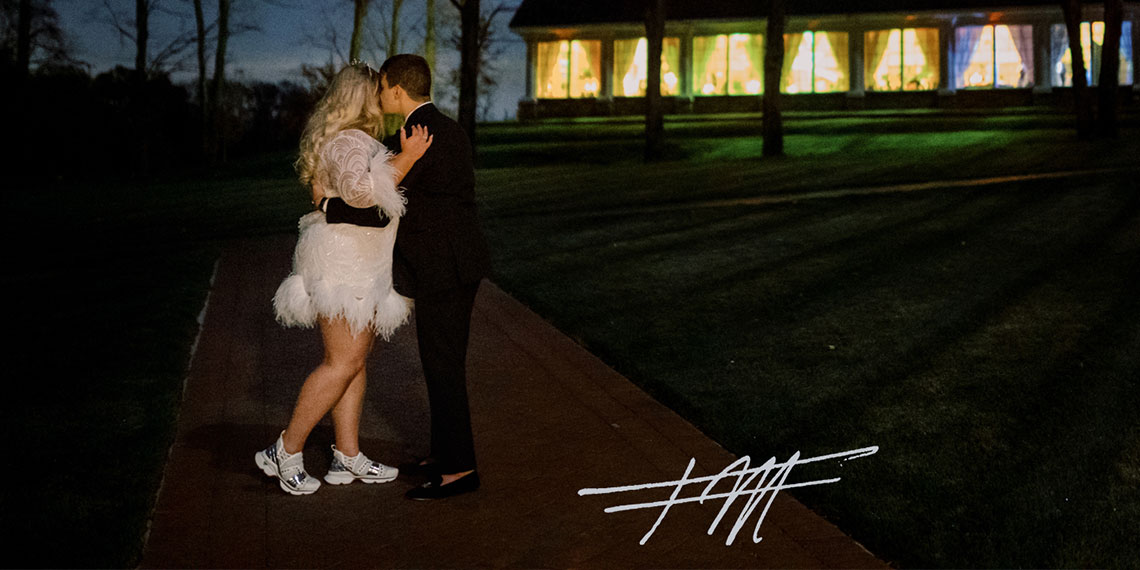 This Bride Got Virally Shamed For Her Wedding Sneakers

Weddings can be a pretty big f*cking deal—I mean, they don’t say it’s the biggest day of your life for nothing. It takes about a year to plan, an average of $36,000 to put on, and determining the place seatings alone is a strategic maneuver requiring a level of diplomacy that rivals the formation of many political alliances. Between pressures and conflicting desires from family, friends, in-laws, and the bride and grooms themselves, what is supposed to be the celebration of a newlywed couple can end up turning into a never-ending sh*tstorm of people to please, to not disappoint. So imagine planning your wedding for over a year, having a great time, thinking you’d pulled off a classy affair that still managed to showcase your personality, and then finding out that you’d become internet famous… for how bad it was.

That actually happened to Juliette Brandman, a New York-based bride. An avid Betches fan and listener of the Betches Brides  podcast, she sent us an email:  “So upon returning from my honeymoon, I see myself all over the Daily Mail Snapchat story shaming my wedding dress and shoe choices,” she wrote. The offender was, as Brandman explained, “an ex-girlfriend of a boy I knew in college” who had posted her wedding pictures to a Facebook group dedicated to talking sh*t about people’s weddings. Brandman had worn a short dress with feather details along the hem and sleeves for her reception, as well as sneakers, which were Christian Louboutin and, as members of the group pointed out in the comments, cost $1,000. But Facebook wasn’t where Brandman learned about it. She found out when The Sun picked up the post, and then the Daily Mail did a spin-off article (which has since been taken down). She saw it for herself when the Daily Mail put it on their Snapchat story and her friends started sending it to her.

At first, she thought one of her friend’s Snapchat had been hacked, and sending her her own wedding photos as part of the hack. “They’ve really gotten so advanced!” she initially thought. Then she Googled it, and found the story (which, for what it’s worth, was basically just a bunch of screenshots from the Facebook group, amounting to “People On The Internet Don’t Like This Woman’s Fashion Choices”. I know the Daily Mail is not exactly a bastion of investigative journalism, but come on). At that point, reality set in.

“I was like, ‘are you kidding me?’” she said. “It was shocking and I kind of couldn’t believe it. It was definitely hurtful, and you try not to read the comments, but curiosity got the better of me and I totally read them and was like, ‘okay, these are not super nice.’”

What made the Daily Mail and Sun articles especially shocking to her was how the internet’s opinion completely diverged from that of her friends and family. “Every single person at our wedding was obsessed with our shoes,” she said. “Like, people were taking pictures, they were like, ‘omg I can’t believe you are wearing these, these are so cool.’” So to see the internet take delight in having the opposite reaction was pretty jarring. “Those were my special wedding day shoes, and that was a fun part of something that I wanted to bring to my wedding. And I have now hundreds or thousands of people basically telling me I have terrible, hideous taste.” The girl who initially posted the photos to the group tried to qualify that when she initially met the bride, she loved her style—kind of the internet cyberbullying version of “you know I love you, but…”

The other factor that internet commenters didn’t think about when ripping Brandman’s fashion choices apart was the consideration that went into her choosing those items in the first place.  “I am a plus sized bride, and, I’m a plus sized human being, so finding a dress, and finding something that I was comfortable in to wear for a second dress, was a big deal.” (The original poster to the group did clarify, “to be fair this was her second outfit,” as if that would help.) Umm yeah, I feel like if any of the commenters had considered that before slamming her, they might not have had as much ammo to rip her to shreds.

So, yeah. If you worked really hard on something and you found out that the internet was tearing it apart (while you were on your honeymoon, no less), you’d probably be pretty devastated. But actually, Brandman seemed surprisingly calm about the whole ordeal, and mainly just thinks it’s embarrassing. “It’s just uncomfortable because I spent over a year and a half dedicating my life to this wedding. I paid for that dress, I paid for those shoes, that was my gift to myself because I wanted to have something really fun at my wedding.” I, on the other hand, would either be scheming up petty ways to ruin the life of whoever posted me to that group in the first place, or orchestrating a relocation off the grid, so I admire her levelheadedness about the whole thing. She credits her friends and family, saying that since they were the ones who discovered the articles while she was on her honeymoon, they were able to come up with an action plan and support her the whole way.

Another wakeup call was the fact that Juliette barely even spoke to the girl who initially put her on blast. She’d added her back in college, but they hadn’t really been in touch since: “We don’t talk. We’re not friends, we don’t really have a lot of mutual friends.” She still doesn’t understand why the girl went to the trouble of sharing her pictures in the wedding shaming group, a concept she was also unaware even existed. (For the uninitiated, the gist is that you post photos sh*tting on someone else’s wedding, decor, fashion choices, or you can post stories about people who acted terribly at your wedding or a wedding you went to.) Talk about a rude awakening to the darker sides of Facebook. “I mean, it’s human nature to be judgemental,” she offered, “and especially with Instagram, you see everyone’s stuff. But like, you take things out and you privately message your friends about it. You don’t, like, put it on blast when you don’t know these people.” Now, Brandman is doing a Facebook purge, but she says she won’t let one salty girl deter her from posting pictures of her wedding.

“Looking back, I’m like, this girl literally spent the time from her day creeped through my photos and was like, ‘You know what? This would be great for the shaming group that I am a part of,’” she rationalized. “Like, I can’t even imagine.”

And as for whether she confronted the girl in question about putting her on blast? “Absolutely not.”