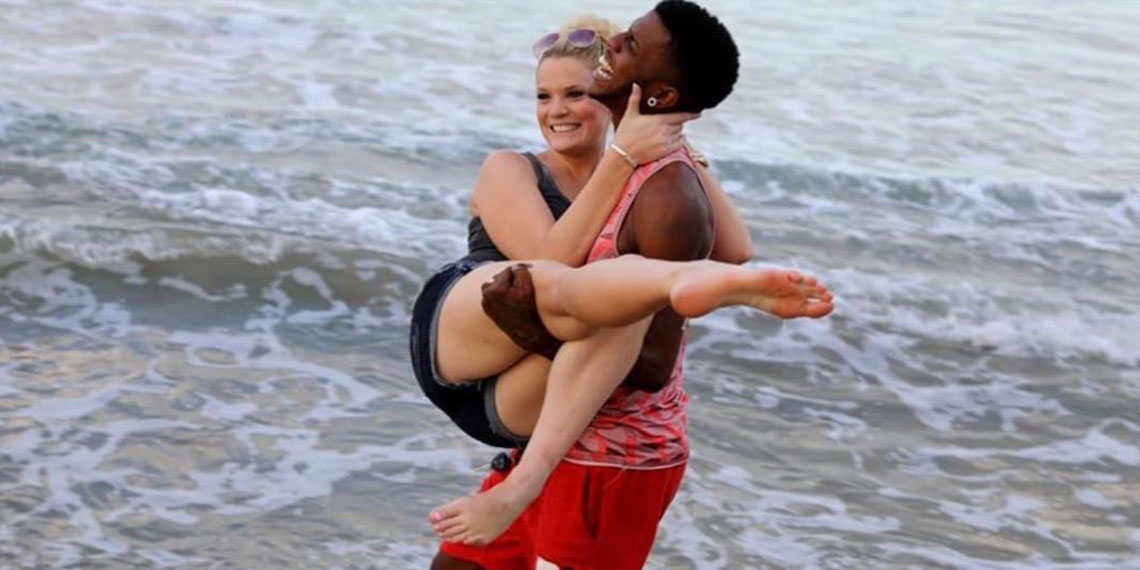 You guys, I have a confession to make: I’m low-key obsessed with 90 Day Fiancé. I began watching it after one of my coworkers gave me a thesis defense on why it’s the best show on television during our company holiday party (working at Betches is wild), and I binged the entire season in about a week. This season was pretty dramatic, what with pretty much every single couple being a thinly veiled green card marriage (with the exception of Kalani and Asuelu, who I do believe are in it for close to the right reasons). But if you ask me, the real drama is taking place right now, off-camera, on social media. Over the past few weeks, sh*t has hit the fan between Larissa and Colt, who announced their divorce amidst physical fighting, shut down GoFundMe accounts, and domestic violence charges. Now, Ashley and Jay are getting a divorce after only eight months of marriage.

In case you need a refresher, 31-year-old Ashley met 20-year-old Jay in Jamaica and decided it was a good idea to marry someone who couldn’t even legally drink in the U.S. at the time of their wedding. They made it through a full three days of wedded bliss before Jay downloaded Tinder and started talking to other women and Ashley caught him. Their relationship was essentially DOA from that point on, but Ashley spent the rest of the season and both parts of the reunion waffling between getting her marriage annulled or staying married and making Jay grovel until death do them part.

A source revealed to InTouch that Ashley filed for divorce on January 11, and Ashley basically confirmed it. She posted in a caption on her latest Instagram, “Who the f*ck is leaking all this sh*t? #LinkInBio #NotCool ????”. That’s not a denial that they’re getting divorced. The source also said to InTouch, “it is frustrating to both Ashley and Jay that this got leaked without them being the ones to get to share their story the way they wanted to.” Excuse me, what? How are you gonna reveal that Ashley and Jay are pissed that you’re leaking their info as you’re leaking their info?  That is truly an impressive level of not giving a f*ck, anonymous source.

The source also said, “It should be noted also that even though they have moved forward towards a divorce, they have remained friends and are super close and on great terms,” which we can all agree is a crock of sh*t. Ashley and Jay weren’t even on great terms while they were married. Who is this source?  Is it Natalie?

Jay also confirmed the divorce. In a new Instagram post, he put up a picture of him carrying Ashley, with the only caption being a broken heart emoji. He turned off comments for the post, which is all the confirmation I need.

So what happens now? First things first: a screenshotted Notes app statement from the both of them. You know it’s coming. But as far as Jay’s immigration status? I have no idea; I’m not an immigration lawyer. On the one hand, a divorce doesn’t guarantee an immigrant losing their greencard. On the other hand, Ashley said during the reunion that she still hadn’t filled out some of the required paperwork for Jay to stay in the U.S. However, if Jay needs another greencard marriage to stay in the country, I’m sure there is no shortage of women who are willing to throw themselves at him (low-key me, please reserve your judgment at this time).

For what it’s worth, neither Ashley nor Jay seems too upset about the divorce. They each posted an Instagram story swipe-up to the InTouch article from their personal accounts. Right after that, Ashley posted a video of her driving while listening to Cardi B’s “Money”. (I’m calling her insurance company to report her for distracted driving.) This morning, Jay posted a series of videos of himself lip synching in the mirror to his Story (proof he really is 20 years old), plus a callout that said “For party hosting and promotions DM OR EMAIL ME”. Minutes after the divorce announcement swipe-up, he posted a Story that said “Can someone get me a contact for someone from Vivid”. So he’s clearly super broken up and not at all preparing to use his platform for fame.

With John and Fernanda, Larissa and Colt, and now Ashley and Jay split up, these 90 Day Fiancé couples are dropping like flies. I will be patiently waiting, refreshing my Instagram feed, to watch the rest of these couples (minus Kalani and Asuelu) call it quits. Call Shaun Robinson, because the drama is just heating up.