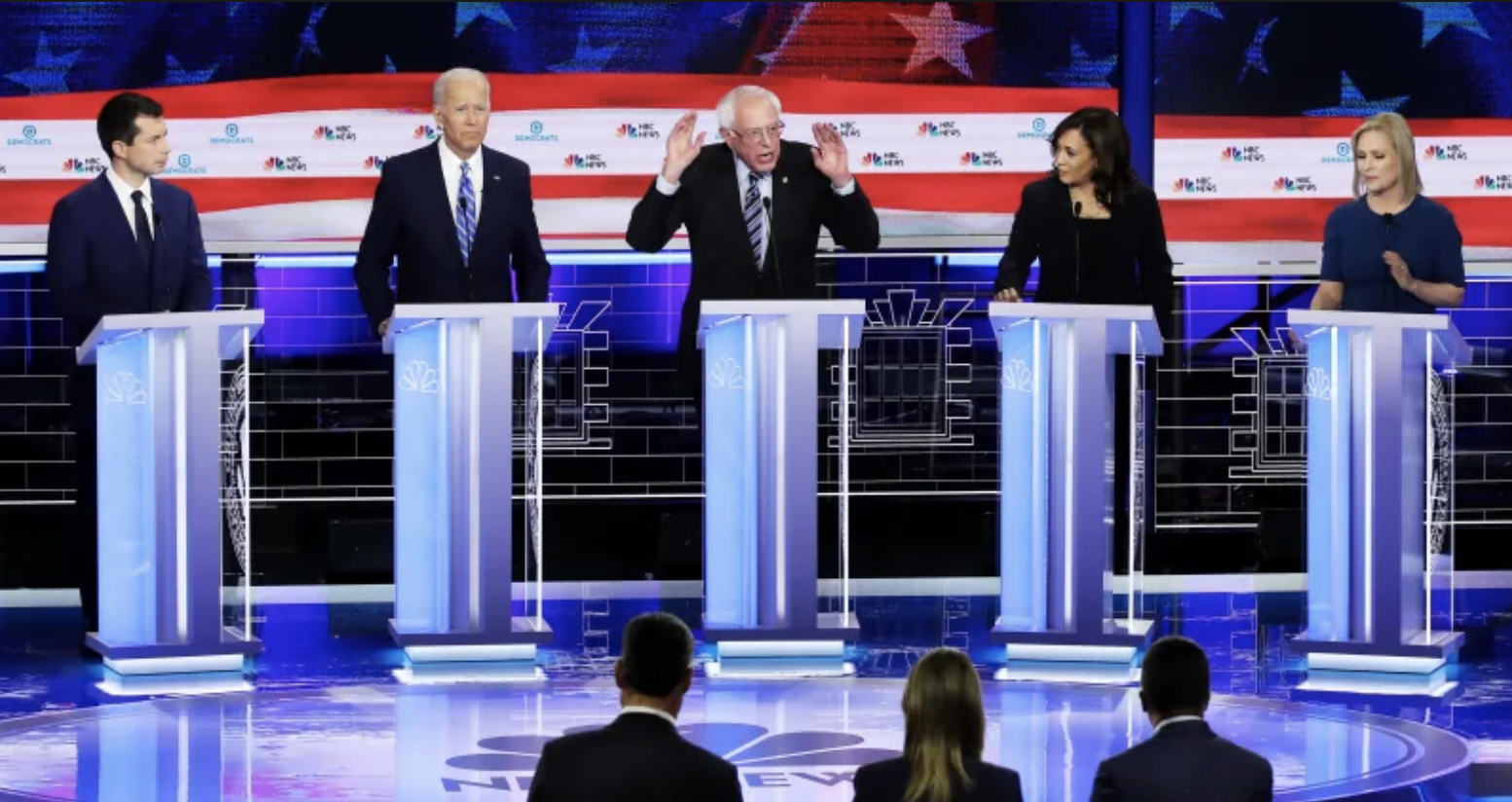 The Ultimate GIF Recap Of Each Democrat’s Debate Peformance

Finally, after two days, 20 candidates and four barely tolerable hours, we’ve made it through the first set of Democratic primary debates. Underdogs plead for attention, frontrunners played hard to get, and Kamala Harris could stage a coup tomorrow and no one would be that mad about it. We feel a lot of things, but one thing is for sure—it’s going to be a loooong 15 months.

Over two nights, the candidates defended their records, begged you to memorize their names, and made their respective cases on how they can take down Donald Trump. Below, we’ve summarized each candidates debate performance with a corresponding GIF.

The 76-year-old was aloof and defensive, telling the young guns he has no intention of passing the torch, but not doing much of anything to show he’s earned it. When it comes to the nomination, his general attitude towards his opponents was:

Oh, he was there? Sanders himself was a bit of a doormat on Thursday, but his impact on the tone of the Democratic field was undeniable. He maintained his OG status on Medicare for All and defended it better than most of his competitors, reminding them:

Buttigieg was solid as a rock, gracefully answering challenging questions about racial politics and taking responsibility for issues at home in South Bend. But he was a little robotic, sounding at times like a policy Alexa.

I mean, did you see that ish? A baddie. A goddess. No positive superlative would be out of place. Harris showed a strong command of policy and emotional intelligence about kitchen table issues that could connect her to blue-collar voters who might not have given her much thought. Other candidates repeatedly tried to talk through her turn, which she handled with grace because she knows all them fives gonna listen when a 10 is talking.

Eric Swalwell is a millennial. Did you catch that? He’s precocious, and he knows just what it takes to make a gun reform advocate blush. No one seemed more satisfied with Eric Swalwell’s performance than Eric Swalwell.

Yang seemed to speak the least, which highlighted his gap in experience compared to all the seasoned politicians on stage. The 44-year-old did have a chance to explain and defend his $1,000 Universal Basic Income, his plan to give every American $1,000 a month. That ought to pique some interest. And at one point he said asses instead of assets.

The New Jersey senator spoke the most, was the most memed AND the most Googled of his night. He won’t win the nomination but he’s a shoo-in for Mr. Congeniality

The self-help author surely endeared herself to plenty of suburban moms who just bought their first crystals. Her saying “Girlfriend, you are so on” in her kind of unbelievable 1940s accent was among the more memorable moments of either debate.

Klobuchar, always coherent and prepared, seemed more apologetic than defiant when defending her moderate approach. Where was that salad comb energy, Ames!? All in all, the Minnesota senator struggled to find a place for herself as the party’s ideological center moves to the left.

Warren brought extreme Hermione Granger energy and maintained her superiority over everyone else in her group.

Kirsten Gillibrand’s general ethos for the evening was “Hey girl.” With an impressive background on women’s issues like reproductive rights and childcare, she addressed female voters directly. She was informed and forceful on every issue.

Beto fulfilled his duties as Julian Castro’s doormat. He was coherent but overly rehearsed and looked depressed and exhausted. He’ll be out of the race and doing IV vitamin sponcon by winter.

I mean, he knew what he was talking about the few times he spoke, and I can now differentiate this white man from all the others. Or at least the other one from Colorado.

Speaking of, the former Colorado governor only spoke for five minutes, during which he (loudly) solidified his platform as “not a Democratic Socialist.”

That the moderators asked anything other than FIX THE DAMN SUBWAY is a disgrace. De Blasio was bigger and louder than everyone else and repeatedly interrupted them, so at least he represented New Yorkers accurately.

All he had to do was talk about climate change for a minute. That happened. So yeah, he killed it.

The debate’s Medicare-for-all alarmist. Sorry, that’s all I’ve got.

Ryan was performing about as well as you’d expect for a Tim from Ohio, until he engaged Tulsi Gabbard, an actual veteran and foreign affairs expert, on Afghanistan and she made him look like little Timmy from Ohio.

Not memorable but for her evisceration of Tim Ryan and covetable gray streak.

See you all next time!