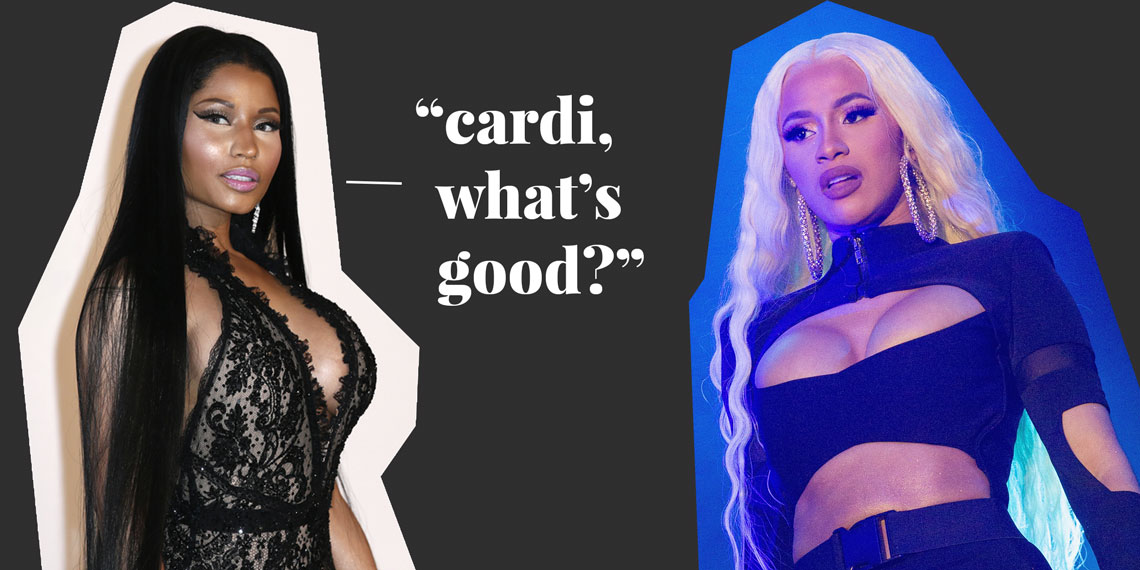 Hello, and welcome back to the latest installment in the saga that is Nicki Minaj and Cardi B’s feud. It’s been nearly two months since the last major flare-up in the feud, but things have clearly not settled down at all. The epic fight at New York Fashion Week basically broke the internet, and now both women are back at it, throwing a wide variety of jabs at each other on Monday. It’s really tough to keep track of everything that’s happening, but I’m going to try to break down the most important points. Brace yourselves for a clusterf*ck of drama featuring leaked phone numbers, Diesel jeans, and…Little Mix? 2018 is bizarre, guys.

As if they were on an episode of The People’s Court, Nicki Minaj and Cardi B really have a different version of these events. A quick refresher: during NYFW, they both attended the Harper’s Bazaar Icons party, where everything went to absolute sh*t. There was at least one Louboutin thrown, and Cardi B ended up with a lump on her forehead. Nicki’s entourage allegedly fought Cardi, but it’s always been pretty unclear exactly what went down. On Monday, Nicki got into the details on her radio show. She claimed her friend Rah Ali punched Cardi “9 or 10” times, which is pretty intense. She also said she paid $100,000 for the surveillance footage of the incident, and also has her own videos.

Cardi B recalls things a bit differently. She posted a series of 10 videos on Instagram, where addresses a ton of different things. She says Rah Ali never hit her, which completely contradicts what Nicki said. She also said she would never lie about this when there are “so much footages” of the incident. She also responded to Nicki’s mention of suing over the NYFW fight, saying that she doesn’t need to sue for the fight because she’s a “street b*tch” and “that’s called snitching.” I mean, she’s not wrong? Then again, I’m not exactly qualified to comment on matters of the street.

As you probably already know, Cardi B is married to Offset, who is the second most famous member of Migos. Earlier this year, Nicki and Cardi both featured on a Migos song called “Motorsport,” and there is clearly still unresolved drama surrounding the collab. In her Instagram videos, Cardi says that she got mad because Nicki changed her verse at the last minute, and the verse was negative toward Cardi. Valid. She says that she called Nicki twice to discuss the issues, but Nicki never picked up. This is one issue that Cardi seems justified being angry about, but then she shows Nicki’s phone number on her screen as proof. CARDI, WHY?? (Cardi’s sister also alleged that Nicki leaked Cardi’s number in the past, but Nicki denied it. Cardi thinks that Rah Ali might be the one leaking numbers on behalf of Nicki.)

In addition, Nicki claimed that Cardi stopped Offset and 21 Savage from doing a music video for their collab on “No Flag.” Cardi steadfastly denied that she ever tried to “stop Nicki’s bag.” She instead claims that Offset and 21 Savage didn’t do the music video because “the song wasn’t doing that good” and it would’ve been a waste of their time. Ouch.

Cardi claimed that instead of stopping Nicki’s bag, she actually helped her bag. (I just like referencing the bag, sue me.) She said that Nicki only got her deal with Diesel jeans because she declined it first, because she’s busy working with other brands. But then, in an unexpected twist, Bill Wackermann, the CEO of Wilhelmina Models (major), chimed in, saying that the Diesel campaign was always built around Nicki. Really, the most surprising thing about all of this is that I’m thinking about Diesel in 2018.

Speaking of Cardi passing up offers, she also said that Nicki only got the feature on the new Little Mix song because she turned it down. (In case you don’t know, Little Mix is a super popular girl group in the UK. Think Fifth Harmony but British.) Little Mix jumped in to the drama, posting a statement on Twitter Tuesday morning, saying that their label gave them the choice of Nicki or Cardi, and they chose Nicki. Every feud needs a good notes app statement, so thanks Little Mix.

After a lot more back and forth, and Nicki accusing Cardi of not writing her own lyrics, it seems like both ladies just got tired. Honestly, same. Nicki went on Twitter to say that she’s ready to focus on positive things, and that she “won’t be discussing this nonsense anymore.” After a decade of following Nicki Minaj, I’m not sure I fully believe this, but I hope it’s true. Cardi posted Nicki’s tweet to her Instagram in agreement, so it seems like they’re in a stalemate for now.

@Nickiminaj alright then! Let’s keep it positive and keep it pushing!

There are obviously a lot of nuanced issues at play here, but I really hope Nicki Minaj and Cardi B can just keep it cool for a while. They’re both massively successful on their own, and they don’t need this drama to fuel their careers. It’s impossible to know who’s telling the truth with all this stuff, so they both come off looking bad. Not to sound like that lame girl from Mean Girls, but can’t we all just get along?