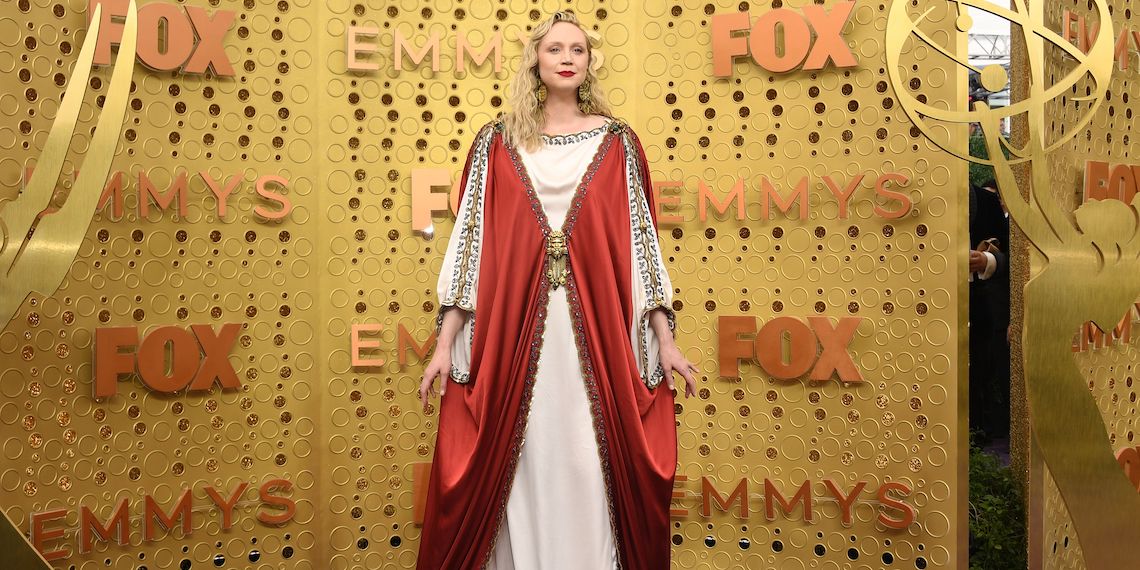 Last night was the Primetime Emmy Awards, aka the biggest night in TV. Therefore, I marked the occasion by not watching the show and just scrolling the #emmys hashtag on Instagram for all the red carpet looks. I have my priorities in order, and three hours of pretending the last season of Game of Thrones was good is not high on my list. Sorry, not sorry! If you want to know what actually happened during the show, here are the main things you need to know, but I’m just here to talk about the clothes.

Luckily, Instagram had everything I needed, and so we worked together to bring you the best and worst looks from the 2019 Emmys. There was a lot of pink and red, some questionable sleeve choices, and one really big hat, so let’s dive in.

Of all the women who came dressed in various iterations of Taylor Swift’s pink and orange crop top/skirt set, Mandy looked the best. With her 1960s hair, she looked like a Lana Del Rey wet dream come to life. She has seriously never looked so good, and I haven’t stopped thinking about this look.

Kerry always looks beautiful because of who she is as a person, but her outfit was more “fun aunt at the bat mitzvah” than it was “Emmys.” This kind of looks like something Jane Fonda would wear, which is great, except for the fact that Jane Fonda is 81, and Kerry Washington is 42.

Billy Porter has made a habit of putting everyone to shame on the red carpet whenever he shows up, and tonight was no different. His hat is delightfully strange, and he kind of looks like Lil Nas X’s fun uncle. He won the Emmy for his work in Pose, and he definitely won the red carpet in the men’s department.

Jenny McCarthy missed the memo that Halloween is next month, or so I gather from her Elsa costume that she poorly accessorized with a 2000s Hot Topic studded belt and combat boots. She also looks like if the Fairy Godmother from Shrek went to Warped Tour. Okay, one more: Cinderella, but make it sea witch.

Good thing they already cast The Little Mermaid, because Halle Bailey would probably be out of a job if Disney had seen Zendaya in a green flowy corset gown and red hair. Nothing but respect for my Ariel.

Now that Orange Is The New Black is over, it looks like Dascha is learning to swim! Idk who thought the water wings on the side of her dress were a good idea, but they need to be fired. And just when I was done complaining about the wings, I noticed that the tulle around the waist looks like it was just an extra scrap that they tied in the back. This dress brings the drama, but in the exact wrong way. Dascha, I want better for you!

She looked like a literal goddess, and I say literally in its real definition and not the way millennials say it, because she was dressed as an actual deity. Jesus Christ, ever heard of him?

While Gwen looked amazing, Gwyn uh…didn’t. In her original Instagram, she accidentally cropped our her face, but even that couldn’t save her from this tragic dress that looked like something I wore to my cousin’s Sweet 16 in 2004. Seriously, wtf are those sleeves? The dress would have been boring without them, but adding a giant frilly mess doesn’t really help the situation. Nice try, Gwyn!

Who did we miss? Did you secretly love Dascha Polanco’s swim class couture? Let me know in the comments, but please don’t roast me for putting Kendall in the best-dressed category. I know you hate her, and I really don’t care.