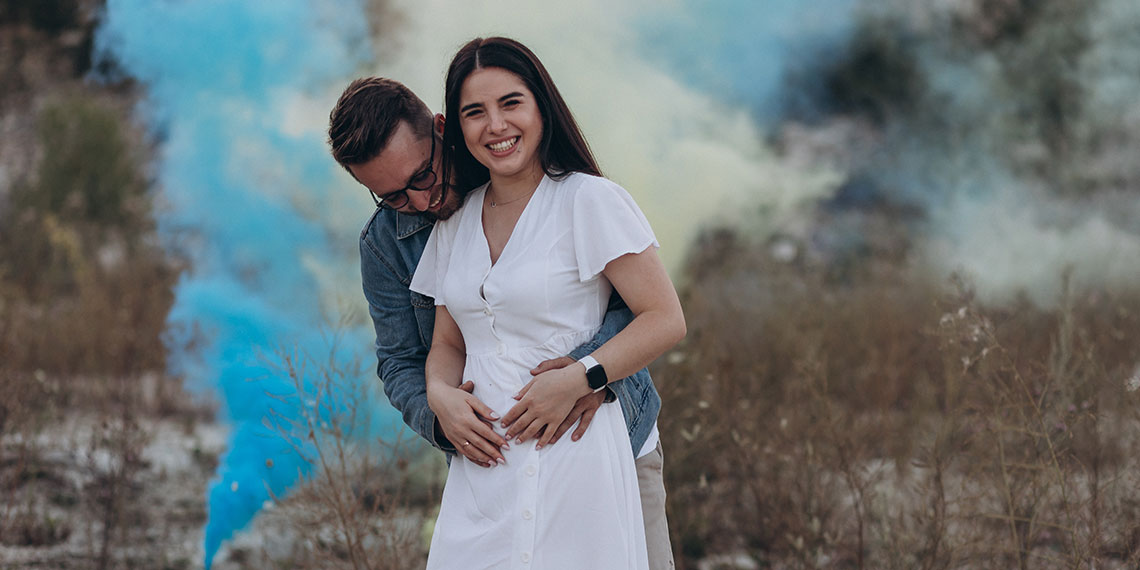 Stop Setting Sh*t On Fire With Your Gender Reveals, And Also, Stop Doing Them At All

Gender reveals: a party to reveal your kids’ junk while they’re still unborn. Gender reveals are a relatively new phenomenon that has already caused significant damage to both the environment and the general sanity of people like me, who keep getting invited to them and then having nightmares about being enveloped in a cloud of blue smoke while people chant “BOY! BOY! BOY!” into my face. Not only do gender reveals typically involve bad cake and a criminal amount of colored glitter, but they’ve also become an obsession with couples who don’t think having a dry baby shower and forcing us all to buy washcloths with ducks on them and then pretend we’re excited to paint a f*cking onesie is enough to properly celebrate their successful bout of unprotected sex.

The most recent cause of the aforementioned environmental damage was inadvertently caused by a couple in California, who set off a pyrotechnic device in San Bernardino county that ignited nearby brush and started one of the many wildfires burning in my home state. That wildfire has already burned more than 14,000 acres and evacuated hundreds of people from their homes, adding insult to injury, since the reason it started was completely unnecessary. Even the woman who is largely credited with inventing the gender reveal party, blogger Jenna Karvunidis, has spoken out about the ways in which what started as a cute, fun event for family has morphed into chaotic, sometimes hazardous situations, saying “Stop having these stupid parties. For the love of God, stop burning things down to tell everyone about your kid’s penis. No one cares but you.” I couldn’t say it better. But I’m happy to add my own twist to the breakdown of why gender reveals, as they stand as now, need to end.

1. It’s Not Even A Gender Reveal, It’s A Sex Reveal

You’re not even calling it what it really is! You are announcing what genitals your baby has based on your doctor’s best guess with an ultrasound probe. Gender, on the other hand, is literally the cultural and social expression of a person’s sex, which can be revealed in a wide variety of ways and to different degrees. Girls liking pink and boys liking blue is an example of a stereotypical gender assumption that we’ve largely grown past (well, some of us). There is no way to assume or predict the way your child’s gender identity will assert itself until they’ve been, ya know, BORN, and had time to figure that out on their own. But it freaks people out to call it a sex reveal because it sounds creepy and weird, which should tell you something. And that thing is: Announcing your baby’s genitals with a powder cannon you shoot into the air is weird and creepy.

2. Celebrating (Or Being Disappointed By) Your Baby’s Sex Is A Privilege

If I had a nickel for every man in a viral gender reveal clip who throws his hat on the ground as pink confetti falls down around him, I’d be able to buy that inflatable hot tub I’ve had my eye on since the beginning of quarantine. The fact that you’re pregnant at all is an accomplishment and a big one. As a gay woman, I can attest to that. Some of us have to actually pay money and visit a lot of doctors and use a stranger’s genetic material to achieve what a healthy, straight couple can do for free any night of the week in between Selling Sunset episodes. I’m not bitter, or anything, but yeah it stings a little. And it’s not just an ordeal for members of the LGBTQIA+ community. There are plenty of heterosexual couples who struggle with infertility, or who have to search for alternative methods to create a family for any number of reasons. The point is that yes, healthy pregnancy and a foreseeably healthy baby is absolutely worth celebrating. For some people, a healthy baby is a miracle, period. The sex, and later on, the gender of that child is secondary to that baby’s general health and wellbeing. Being able to be disappointed or excited about your baby’s sex is a privilege that we don’t all share, and that should be recognized.

3. We All Know You’re Just Doing It For Attention

Yeah, I said it. I know this might surprise some folks, but you can find out your unborn baby’s sex, be excited either way and share that news with your family without setting anything on fire or buying a cake with fugly pastel pink fondant. But people can’t resist the urge to share a personal event on Instagram and watch the hate-likes roll in. And that’s fine; in fact, it’s more than fine. I am completely on board with your need for attention, as attention is something I don’t hate either. But disguising it with a genitalia announcement makes it weird. Would you buy a sign that said “VAGINA!”? No? I didn’t think so. Then maybe think again about doing essentially that for online attention. And if you would buy that sign, then go for it. At least you’re acknowledging that it’s a sex reveal and not trying to act like it’s something else.