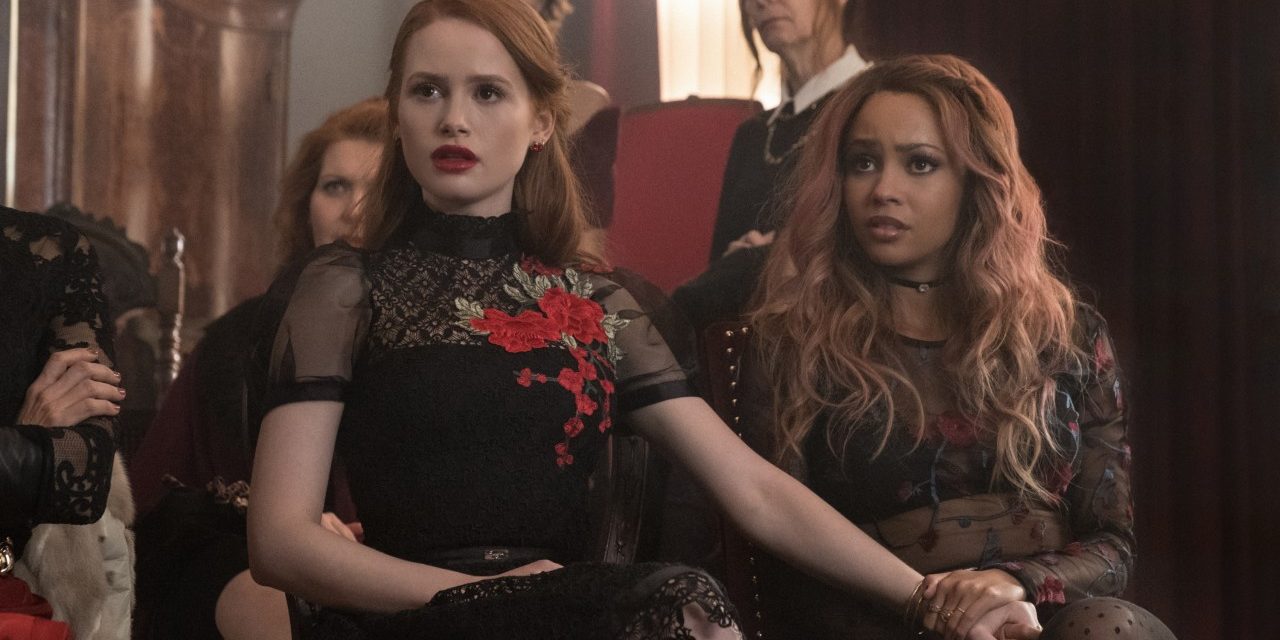 ‘Riverdale’ Season Finale Recap: Everyone Gets A New Jacket

Hello, fellow twentysomethings who like to watch teens make out on screen! We’ve made it to the Riverdale finale, and I am hopped up on Jingle Jangle and ready to go! I know I’m not your regular recapper, but I’ll try my best to do It’s Britney, Betch proud—and if I don’t, please rest assured that I will hear about it if she ever answers my texts.

When I first found out I would be taking over the Riverdale finale recap this week, I started making notes in my journal of the things I wanted to keep track of. I have my fingers crossed for a season high count of the phrase “Make my bones.” Archie, don’t let me down, you adorable idiot! Shall we get started?

The Riverdale finale opens with Betty, Archie, and Veronica at Jughead’s grave. The girls are in chic black, Archie is, of course, in his very appropriate letterman jacket. His friend may be dead, but did you know he is on varsity wrestling, god dammit? Betty is sobbing and asking Jughead to come back to her—this is definitely not real, right?

Psych! That was all in Jughead’s dream. Riverdale’s got jokes, y’all. Jughead wakes up in the hospital alive, but wishing that the name Forsythe Pendleton Jones, Jr. was a dream. The OG FP is in his room and drops some bombs. Fangs is alive! The Serpents are over! The trailer park burned down! How long was Jughead knocked out for? FP really buried the lede, though, because oh YEAH Betty’s dad is the Black Hood! Guys, if we collect all the Black Hoods by the end of this episode, do we get a prize?

Betty and her tight ponytail come to visit Jughead and his rearranged face at the hospital. He comforts her about her dad being the Black Hood and then immediately follows with “So I guess we won’t be running for student council anymore, huh?” I guess it was too much to expect a boy named Jughead to be sensitive for too long.

Cut to Veronica at Fred’s house, where she is literally planning the rest of his campaign. Freddie, if you’ve resorted to trusting your teenage son’s first sexual partner with your Mayoral campaign, I think it might already be too late for you. Veronica announces she isn’t running for student council president either.  BUT THEN WHO WILL RUN THIS SCHOOL INTO THE GROUND? Oh, we still have Archie. Blessings.

OMG Cheryl just discovered a secret barn meeting! Mr. Kelly Ripa is having a covert discussion with Penelope and Claudius. Obviously they’re up to something, and for once it isn’t Mrs. Blossom banging her friend’s dad.

Archie: But there’s someone else out there murderin—
Sheriff Minetta:

Betty goes to Archie’s house to apologize to Fred. She says she is supposed to be a great detective and really let everyone down. Huh? I must have missed the episode where she got sworn in. I hope she wasn’t thinking she was going to get the cruiser, though. Kevin’s dad will let her have it when she pries it out of his cold dead hands.

Kevin happens upon Moose crying in the bathroom. Moose is sad because Midge’s stuffed animals in her locker are gone because of the rioting. Stuffed animals? Honestly how did Midge not get the shit beat out of her at school before this whole murder thing? Yeah, I did just say that about a dead girl. Get over it. Moose and Kevin have a hot makeout sesh in the men’s room. Not totally sanitary, but I guess better than those murder forest escapades.

Cheryl warns Veronica that her dad is in cahoots with Penelope and Claudius.

Veronica confronts her dad, Mr. Kelly Ripa. He says he just wants to get into the maple syrup trade. God, Hiram! Don’t you know “Maple Syrup” is code for drugs??!

FP got fired from Pop’s and is lying around his trailer of impenetrable plastic that could not be burned down, looking drunk and broodingly handsome. He tells Jug they are moving to Toledo. FP, I speak for everyone when I say we would all literally rather get beaten to death by ghoulies than move to Toledo.

Sheriff Minetta calls Archie back and says he made it his mission to find the second Black Hood. Oh really? Because your eyes glazed over more than my boyfriend’s when I just want to talk about my commute in excruciating detail, but okay. He says the second Black Hood was Tall Boy and they killed him in a fire fight. Well, that was an anticlimactic reveal. They really know how to deliver in a finale, huh?! All the action off screen! That’s the way to do it.

Polly is visiting her family with her babies, Poison Oak and Acorn. Polly thinks they need to visit Hal and forgive him for murdering their friends, wreaking havoc on their town, and never revealing that they were actually related to the Blossoms until his daughter was pregnant with their inbred spawn.

Alice: Yes maybe let’s see Hal so I can give him a piece of my mind
Inner Alice:

Hermione tells Veronica that Mr. Kelly Ripa is responsible for the school shooting and that he just needs control of The White Wyrm and he’ll be able to complete his plan.

Mrs. Blossom is incredibly offended when she finds out the daughter she sent to a mental institution for being gay doesn’t want her to be her guardian anymore, but she does warn Cheryl about the raid on The White Worm.

The Serpents abandon worm and head over the Fred’s for some bacon and pancakes. Then those crazy teens head over to the school in Serpent jackets as a show of support for the Southsiders, who are getting transferred to another school. Oh look, someone managed to surgically remove Archie’s varsity jacket! It was a long and difficult procedure, but in the end, the doctors deemed it a success. It will be published in many medical journals. Archie now wears a serpent jacket and is looking *almost* as fine as FP.

Veronica hatches a plan to stop her dad from getting the White Wyrm. She buys the bar out from under him, but is willing to trade if Mr. Ripa will give her Pop’s. He trades her, but in the meantime she gives up all her inheritance, her stake in Lodge Industries, and her dignity. All so her friends can drink milkshakes! This is why teenagers should not be allowed to do business. Their brains aren’t fully formed yet.

Betty and Jughead are hanging out with Polly’s twins, and Betty is wondering if evil can be passed on. Frankly, I think these twins might have a little more to worry about including webbed toes, genetic diseases, and possibly a clubfoot. Jug says she isn’t evil. Honestly, Betty, your obsession with this darkness is starting to obsess me. A black wig and some kinky lingerie does not a murderer make.

Bless our bored souls, we have finally reached voting day! Archie wins. How shocking and surprising that the handsome idiot beat out the overweight girl! Rest assured the status quo is restored. The Southside students also get to stay. Cool. Name a more pointless plot line, I’ll wait.

Betty goes to visit Hal at the prison. What kind of prison is this with the full glass wall? Olivia Benson never got one of these. Betty says goodbye to her dad and to darkness her old friend.

The Serpents are celebrating with a junkyard fire. FP passes his torch on to Jug. His first order of business is to bestow a gorgeous red serpent jacket on my queen, Cheryl Blossom.

The phone rings at Fred’s party. He finds out he lost the race to Hermione, and then she shows up to give her condolences.

All of a sudden, we cut to Archie sitting in Mr. Ripa’s study. He snuck up the servant’s quarters like the peasant he is. Archie tries to intimidate Hiram with a very tiny blade. The same one I used to cut up my banana last night, I believe. Archie tells Hiram he knows everything and that he is coming for him and will MAKE HIS BONES ONCE AND FOR ALL!! TBH I’m very let down he only said it once this episode. For that reason alone, he did not make his bones with me. Then, instead of ya know, killing the evil dude ruining his life, Archie dramatically stabs his pocketknife into Hiram’s table and storms out.

So basically it went about how all Archie’s plans go:

The gang meets at Pop’s, pleased with how they managed to save it. Do those milkshakes taste like a million bucks, V? Literally?

Hiram walks into a secret meeting. He has assembled a crack team of evil morons, consisting of the middle-aged town prostitute, the identical twin of a dead drug dealer, a ghoulie in a studded jacket from Zara, an ex-Serpent lawyer, and the new sheriff that rode there on his bike. He says his plan is in motion, but Penelope is just pissed because she wants her brothel now. GOD MOM! Can’t you just wait a few minutes to sell your body?

Alice and Polly are sitting at the kitchen table talking about visiting Hal again. Polly suggests that she have someone from her farm come talk to Alice and help her get over all this. Is it just me, or is that a very culty vibe Polly is giving off? I mean, if anyone in that family got the darkness, I would think it’d be in the daughter that banged her cousin.

Betty and Jughead are in bed together. Jughead asks Betty to be his Serpent queen. Can you possibly think of anything more romantic?

We’ve finally made it to the school for Archie’s swearing in, and my tummy hurts and I don’t think it’s from the jingle jangle. Something very bad is about to happen. As Josie sings, the new sheriff saunters on in straight from the passenger seat of his mother’s Toyota. He’s headed right for Archie and tells him he’s under arrest for the murder of some dude named Cassidy aka the guy that tried to rob them at the cabin! Mr. Ripa stands there looking at Archie menacingly as the sheriff drags him out. I bet you wished you hadn’t just used that knife on the table now, huh Archie? THE END.

WOW! What a nothingburger of a finale! See you all back in the fall when we will find out if Archie will go to prison, if those milkshakes really were worth a million dollars, and if Cheryl’s mom will finally get the brothel she deserves.