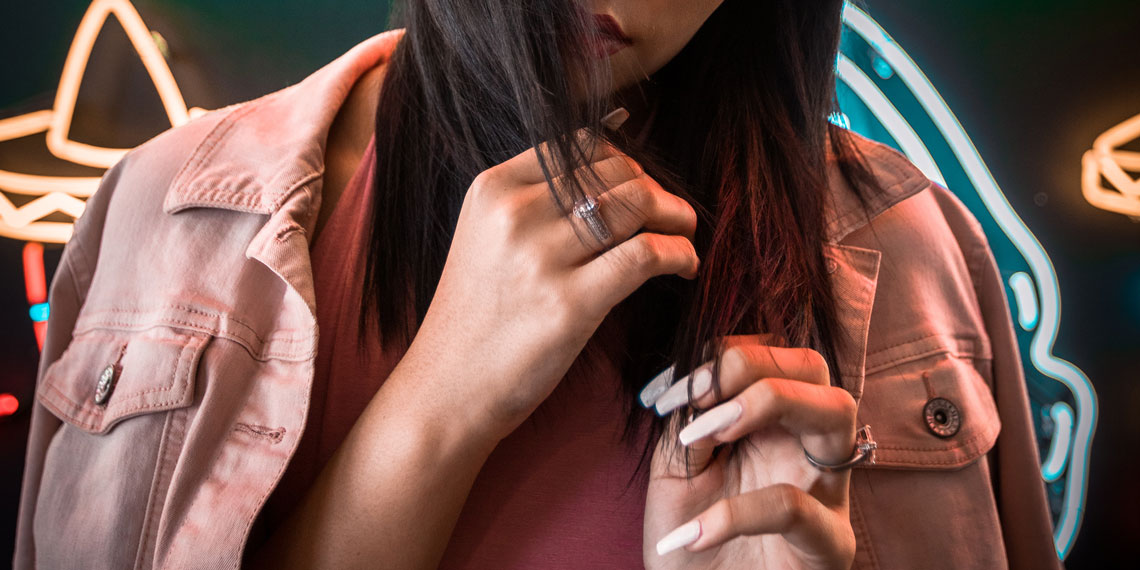 Powder Dip, Acrylic, Or Gel? Which Type Of Manicure Is Worth It

As someone who has identified as a chronic nail-biter for most of her life, I am (arguably) too invested in manicure culture. And I’m not talking about like, which mosaic design should I spend 4 hours and $98 getting licked on by kittens at Paintbox. I’m talking about the heavy-duty tools that transform my fingers from shredded nubs into somewhat respectable lady hands. In college, it was more about getting cool, claw-like nails for marking my territory the backdrop of latte art Instas. But at this point in my series of increasingly random jobs career, I’ve realized it’s a little gross to go in for a handshake when your nails look what can only be described as “freshly chewed.” Whatever reason you’re doing it, here are the pros and cons of various high-tech manicures.

SNS powder dip is not an artificial nail. It’s a different way of applying polish. Instead of painting on a liquid, the color comes from pigmented powder. Your nails will either be dipped into small containers of powder or the powder is painted directly on. You’re finished off with a top coat, and then—and this is my favorite part—you’re done. Totally dry, no UV light or 20 minutes under the regular dryers that still end with you ruining a nail as you walk out. This is meant to last up to three weeks (longer than gel), and it’s meant to promote nail growth. (The powder itself apparently has various vitamins or nutrients that do that; who knows what I believe.)

The biggest issue with powder dip right now seems to be that it’s only recently come back in style. So it’s hard to find a place that does it, and almost impossible to find a place that does it well. As for whether it’s better/worse for you than gels? While it’s promoted as a healthy alternative, most experts agree that it probably does the same amount of damage—just a different kind. Ultimately, my results were pretty good in some ways, and awful in others. Cons: it cost $45, they dipped my nails directly into the jars, and the color peeled off after a week and a half. Pros: the peeling process was super satisfying, I had zero chips, and my nails did grow back longer than ever. Would I do it again? In a heartbeat—but only at a different salon.

Acrylic nails are nothing new, but their popularity in mainstream culture has changed a lot in the time I’ve been alive. As a 90s baby, I spent my teenage years thinking acrylics were tacky. I spent my college years clicking “Follow” on every Kardashian’s IG and getting acrylics once a month. Ah, how times change. While acrylics have many cons that I will outline in a minute, I can tell you right now that if you want Kardashian nails, you are going to need to get acrylics. Full stop. I don’t care how naturally long your nails are already (and did I mention I hate you?). If you want that long, skinny “stiletto nail” shape preferred by our unofficial royal family, you shouldn’t try to impose that on your natural nails. They will break, one at a time, and your nails will not grow back evenly for six months.

Acrylics, on the other hand, are pieces of plastic glued on to your natural nail and then filed into whatever the f*ck you want by what I think of as a miniature power drill (and what probably has a different, real name). The process will be very long, especially if you want the acrylics to be a feasibly human length (think 90 minutes minimum). Acrylics will also kind of shred your real nails underneath, as in they’ll look terrifying and swamp thing-y when the nails first come off. I’ve found it’s nothing a strengthening clear coat and some cuticle oil won’t fix, but I wouldn’t recommend months of back-to-back acrylics with no break. So, cons: time-consuming, often pricey, requires fills every 2-3 weeks, and will have an unpleasant effect on your nails. Pros: this is the best your nails will ever look.

I’m assuming most of you know what gel manicures are. They’re the more expensive option to regular manicures, with the bonus of walking out with dry nails that will (allegedly) last longer than regular polish. Gel extensions, on the other hand, are an alternative to acrylics. The extensions themselves (the thing that is not your nail that you are attaching to your nail) are made of the same gel as gel polish, and you pick a size and shape to have attached to your natural nail, same as acrylics. Rather than being glued on, the gel extension is bonded to your nail using (surprise!) more gel. LED light then apparently bonds all this together, and voilà, you have a gel nail addition to your nail.

I’ve never personally tried gel extensions, because (con #1) I’ve found it even more difficult to track down than powder dip. However, I’ve seen it on friends and I think this has potential to be the best nail trend yet. I’ve never been crazy about the process of acrylics (the chemicals are good for no one involved, least of all the nail technicians). And somehow putting glue and plastic on top of my natural nails feels like something I should’ve left behind in middle school. That being said, I’m not about to give up the dream of having long nails I can loudly drum on countertops when I’m annoyed. That’s the right of every American. So, if gel extensions actually cause less damage to all involved? I’m on board.

(Sidenote that gel extensions are certainly the most expensive option on this list, since you will actually have to go to a bougie place to get them and pay bougie prices.)

And that’s all my wisdom! If you prefer natural-looking nails and yours are in need of some rehab, powder dip is the best investment you can make. If you’re looking for long-term glam that won’t shred your existing nails, write your congressman and tell him we need more nail salons that do gel extensions. (I kid! But not really.) And if you need Insta-worthy claws for an event this week and can’t afford to ball out on experimental new trends, acrylics all the way. Your friends who still call it tacky will eat their words when they see how f*cking good it can look.