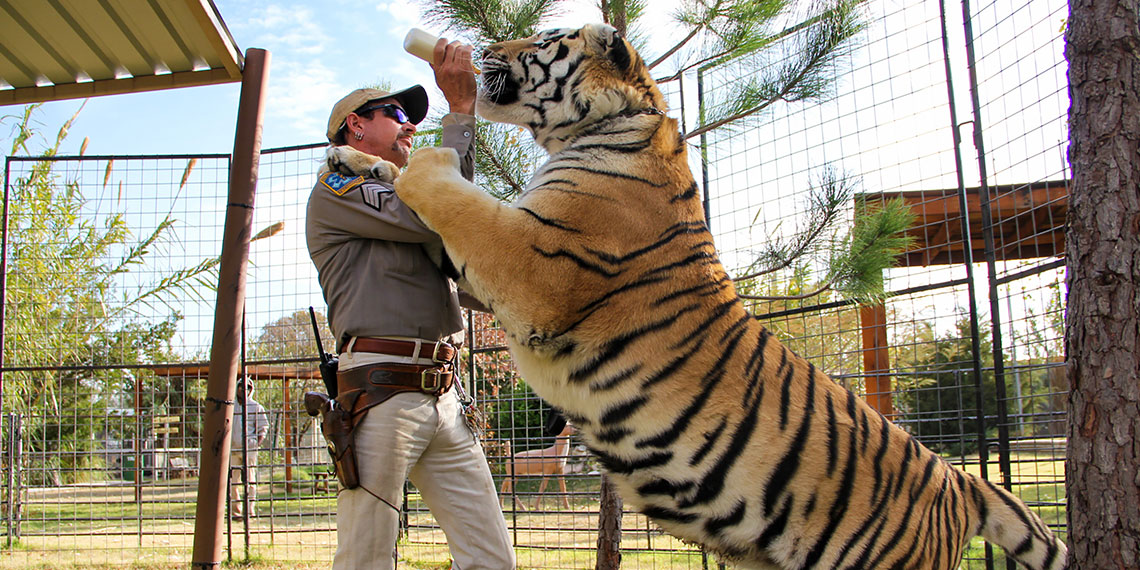 During these times of self-quarantine, are you choosing not to watch the cinematic masterpiece that is Netflix’s Tiger King in order to be “productive,” or “work” because you’re an “essential employee,” or maybe you’re just boycotting it because you’ve heard about the blatant animal abuse in the show? If you identify with any of these reasons to not watch, you have a lot of willpower! My mom is also choosing not to watch because she said the title makes it “sound scary.” I wanted to tell her it wasn’t a horror show, but after binging it in a single day, I’m not so sure. Either way, your less responsible friends ARE watching it, and if you’re planning on Skyping/Zooming/seeing them once this is all over, it’s all they’re going to want to talk about. So here are some talking points to give you a general overview of the chaos and help you seem like you know what you’re talking about (I wish I had an article like this when I went to a Super Bowl party sophomore year of college):

While we are living in crazy times, it’s nice to have a reminder that there are people in Oklahoma who are infinitely crazier. Joe Exotic is the star of this show. He’s a fashion icon, presidential candidate, and owner of 200+ tigers. He is our Tiger King. And he’s f*cking nuts.

My friend told me about this show because they said the chaotic energy of Joe Exotic reminded them of me. And while, yes, it was chaotic of me to slam seven different types of alcohol and attempt a backflip at Kappa formal, I like to tell myself that I’ll grow out of it.

I want to believe that a rogue Bachelor producer is behind the character that is Joe Exotic, manipulating him with endless wine to act like a lunatic, but this is just how he is! I’ve never felt more confident that I’m doing okay with my life, and I’ve seen Lizzo twice! Joe talks about how he loves the spotlight and being the object of other people’s envy, and I mean same, but I don’t think everyone necessarily envies you when they are watching you on stage with the 400-pound killer beasts, more than they are just hoping something goes wrong while their phone is out so they can go viral on TikTok. Joe is always doing dangerous stunts and telling his staff to make sure they get good promo shots, and it reminds me of myself yelling at my mom on the beach during our last Royal Caribbean Cruise. Sorry mom, but I did get a hot Instagram out of it!

Joe does a lot of questionable things throughout the series that you’ll want to be sure to mention, so your friends won’t realize you’re lying. He married two straight guys at the same time and then used one of their funerals to promote his music career (I know), he gave out condoms with his face on them when he was running for Governor (I KNOW), and he hires someone to take a hit out on his arch-nemesis Carole Baskin (I f*cking KNOW!!!). Overall, what you need to know is Joe Exotic is a bad guy and he ends up in prison!

Carole: The tigers go from being so sweet to just wanting to tear your face off and they could do it like that, it’s amazing they have that kind of range!

That’s not what I find interesting, Carole. Every single sorority girl I met in college has that same level of range. They can go from dancing on the table at Sigma Chi to sobbing into their trashcan punch on the bathroom floor in the time it takes Chad to open a Snapchat and not reply. In this instance, the tigers do not impress me!

What can I say about Carole Baskin? I’m not entirely convinced that she’s not a “where are they now?” of Dorinda from The Cheetah Girls. I wanted to love her at first, and the show initially portrays her as a hero for big cats, but if you watch (which you haven’t), you quickly learn that she’s a shady bitch in her own right.

Carole tells us that her mission is to end the captivity of big cats, as we are shown all of her big cats in captivity. We stan a hypocritical queen. It’s much like when I tell my friends I’m done drinking for a while, and then proceed to sh*tpost on my Instagram story that very same night after five vodka sodas. I’m still not sure I understand the difference between Carole and Joe’s places other than the fact that one is branded as a sanctuary and one requires a tetanus shot before entering. When talking about Carole you’ll want to talk about the fact that she absolutely murdered her husband. While there isn’t necessarily proof and she hasn’t been convicted or even arrested for his murder, 99% of viewers are convinced. And if she and OJ Simpson join the same spouse bereavement support group, we’ll know for sure. Essentially, what you need to know is Carole is also a bad guy, she’s just still on the loose!

Doc isn’t addressed nearly as much as I believe he should be. He gives me “Founder of Scientology” vibes and I feel like after we pet the cheetah at his zoo, he’s going to pour me a glass of punch and toast to passing on to the next life. He hires impressionable teenagers, makes them work insane hours for $100 a week, and then before they know it, they are trapped in a full-on sex cult. If you’re looking for employment after social distancing, I would steer clear of this place. Just mention to your friends that you think Doc’s sex cult deserves a docuseries of its own and you will be met with a resounding “SAME!” Also, a bad guy. Are you starting to see a pattern here?

Jeff Lowe is a character I myself haven’t figured out. Essentially, he steals the zoo from Joe and he and his wife are both sleeping with their child’s new nanny. He and his wife have a very specific kink, and that kink is wheeling tiger cubs through unsuspecting Vegas hotel lobbies in order to sleep with hot young women. And that’s not even interesting enough for me to get into when compared to the overall show. Insanity!

If you want some positivity to sprinkle into your rehearsed conversation with your friends, you can talk about the genuinely okay people on this show. There are a few! Saff, who has one arm (tiger attack); John, who has no legs (unclear); and Howard Baskin, what a weirdo. He clearly is very devoted and loves his wife Carole, but I’m wondering if it’s because she has some serious dirt on him. Who knows? (Hopefully we will when an investigation is opened on the whole Don Lewis-being-fed-to-the-tigers situation.)

If, after all of this tea that I have just spilled, you are still not compelled to watch, then I’m impressed. And honestly, a little jealous. But if I have given you enough information to lie confidently to your friends, then I’ve done my job! Happy quarantining!

Jacob is a graduate student currently residing in Texas, but don't judge him for that. His hobbies include covering Jesse McCartney at karaoke and scrolling through his own tweets. You can find him on Twitter at @jacobhowle.