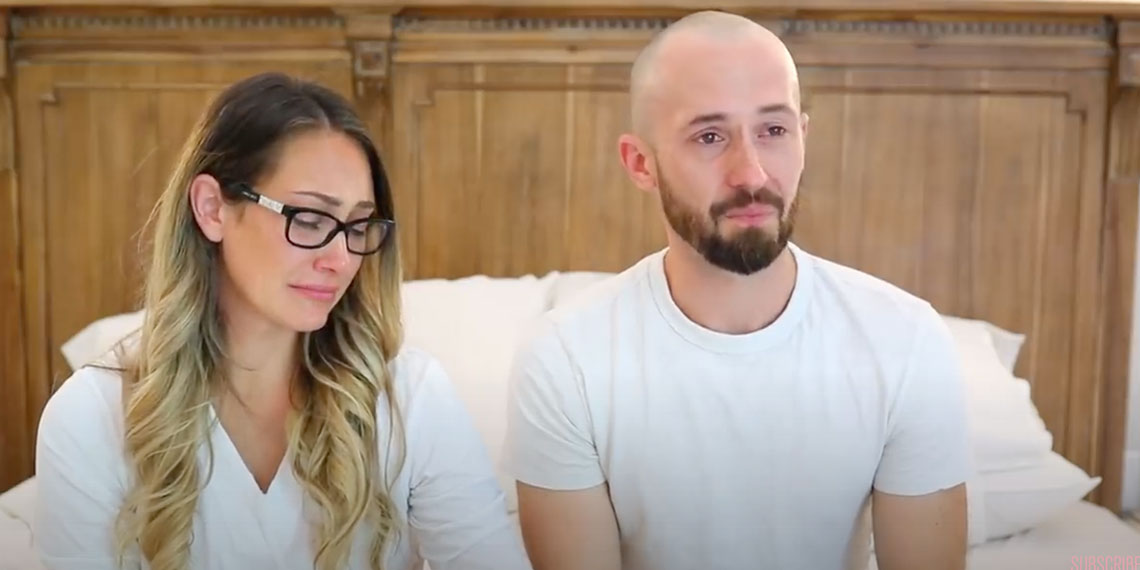 Mom Influencer Myka Stauffer Used Her Adopted Child In Content, Then Gave Him Up

From scamming their followers out of all their money by convincing them to give up their bank account information to spamming their followers with giveaways to making questionable trips to the Hamptons, influencers have been coming under fire a lot recently. And the latest influencer controversy is probably one of the saddest yet, since it involves an innocent child and a family who adopted him, literally profited off of him, then gave him up. Over the past few weeks, people on Instagram, Reddit, and other forums have speculated that Myka Stauffer, an influencer and YouTuber with 170k followers on Instagram and 715k subscribers on YouTube, gave up her adopted child. The vlogger and her husband recently confirmed in a new video on her YouTube page that the family had, in fact, sent the child to live with a new family.

Myka Stauffer is, according to the “about” section on her website, “a Mommy of 4 from Ohio” who loves “sharing videos about Mommy life, DIYs, Organization, fitness, cleaning, lifestyle, and Day in the Life videos!” She has four children with her husband James, and in October 2017, she and her husband adopted a baby from China, Huxley. Even before he was adopted, she would post about the process on her family’s YouTube channel (which now has 330k subscribers), and even did a fundraiser for his adoption on their YouTube channel. In total, she and her husband made 27 videos about the adoption process, and more than one entitled “China Adoption Journey.”

But things weren’t as easy and breezy as her content would make it seem. In June of 2019, she gave an exclusive interview to Moms.com where she talked about the challenges of adoption, saying she was “really nervous and scared” when she found Huxley’s adoption file and found “he had brain damage and brain tumor”, but she “prayed for a sign” that the adoption was meant to be. Sure enough, she learned, “our birthdays are very close. I just felt like and knew that he was supposed to be a part of our family.” Yeah, that’s definitely the quality you should be looking for when considering if you have the resources, knowledge, and patience to adopt a special needs child: if your birthdays are close together.

Once they took Huxley home, she would post about him pretty regularly on her Instagram, putting up pictures of him with her other kids, photos on Santa’s lap, even using him in ads.

There’s nothing better than bonding with my little bear 🐻 I will take you as my lunch date, any day of the week! Today we made the world’s most delicious cucumber, cilantro and mustard sandwiches. Using Brownberry Organic 22 Grains & Seeds bread, and everyone loved it including Huxley! This organic bread from @brownberrybread is one that we trust as a family! It’s also a perfect snack for an on-the-go busy Mama that is trying to make nutritious choices for your little ones! #SliceofAdventure #ad

But she said in the interview that early on, they noticed developmental issues, and after testing, she revealed in an article for The Bump, they learned he had autism.

But still, over the next two years he remained in their home, she continued posting him and her other children pretty regularly, usually with upbeat captions that talked about being grateful for her family. Typical influencer stuff. Sometimes, she would allude to challenges, like in a January 24 caption, where she accompanied a picture of her, her husband, and their children with, “Every day has new struggles, and new hardships but, there isn’t anyone else I would rather experience this with!” (She ended the caption with hashtags including #blessed #dontsweatthesmallstuff, though—again, typical influencer stuff.)

On February 16 of this year, Myka posted a picture of her and Huxley, writing in the caption, “The last couple days have been hard I don’t want to sugar coat anything. We have had a lot of melt downs, and lots of behaviors that have had us on our knees begging god for guidance! On social medial and YouTube we rarely show the behaviors or the hard stuff, because we try our best to respect our sons privacy and dignity. We have hard days, lots of them. I wish autism and adoption trauma had a manual to direct you through it all.”

Despite the challenges, Stauffer said in her June 2019 Moms.com interview that the difficulties she faced “made me want to fight for him more. That’s my personality. I’m a perfectionist. I’m a fighter. I am an advocate. If you tell me no, I’ll say yes, and find a way to make it work,” and it seemed like, despite the issues that came with raising a child with special needs, the Stauffers were committed. But ultimately that wasn’t the case. Soon after that February 2020 post with Huxley, followers started noticing he was absent from Myka’s photos, and started wondering where he went, even accusing Stauffer of deleting comments questioning his whereabouts.

On May 26, Myka and her husband put out a YouTube video titled “an update on our family” addressing the situation (which doesn’t appear on the home page of her YouTube channel under “newest videos”, you have to navigate to the “videos” tab to find it). In the video, Myka and her husband explain that they were unaware of a lot of Huxley’s needs when they decided to adopt him. Ultimately, Myka says, “after multiple assessments, after multiple evaluations, numerous medical professionals felt that he needed a different fit in his medical needs,” so they made the decision to send him to a new home.

Can you really just do that, give up your kid like a bad puppy or a designer bag you don’t want anymore? According to a 2018 report in The Atlantic, although accurate statistics are not really available, the U.S. Department of Health and Human Services estimates that between 1 and 5% of the 135,000 adoptions that are finalized in the U.S. every year end up being legally dissolved. And, no sh*t, children going through second adoptions are at risk of significant trauma.

As for Huxley’s sudden disappearance from their social media feeds, James explains in the video, “We haven’t made this video yet because we’ve been trying to protect his privacy, his rights, and try not to mess up his future that was laid out in front of us.” Myka adds, “and that’s why on Instagram and stuff I tried to let you know as little as I could, but I couldn’t tell you any more because I didn’t want to mess anything up with what’s going on legally.” At one point, Myka said that she intentionally “never publicly aired” “99, 95% of the struggles” they faced, but may have shown her followers “a teeny like, struggle or hardship when I was trying to be really raw and real.”

They both reiterated that, to protect his privacy, they did not and would not go into the details of what ultimately caused them to make their decision, but they did say that Huxley has found a new home, and the adoption agency placed him with “literally a perfect match.”

I am neither a parent nor an adoption or parenting expert, so I will not comment on the process of rehoming an adopted child, except to say that even if Huxley no longer lives with them, the Stauffers should still be actively looking out for his best interests since they publicized the first two years of his life on their huge platform. But I wonder where that concern for his privacy was when they were giving interviews to websites, going into detail about his developmental issues, posting about their struggles with parenting him to try to be raw and real, and literally using him for ads?

While Twitter is hardly the best temperature check for unbiased or balanced takes, users took issue with the fact that Stauffer earned money while posting about the child and his adoption, and then later gave him away.

They may have their reasons for sending Huxley away, it’s heartbreaking, it truly is, but regardless of their reasons, the fact her Instagram posts carried on as if nothing happened, glorifying motherhood just makes me feel a bit ill.

im sick 😷 @MykaStauffer adopted an autistic child from china and after years of having him, she gave him up for adoption because he had “bad behavior” after using him for $$$ on her youtube channel of almost 1mil subs. people like this do not deserve followings or children

Some of the more… shall we say… cynical users go so far as to accuse Stauffer of adopting the child strictly for views.

I mean he’s not wrong. She adopted a child for views and then got rid of him and treated him like a brand deal..

After the video went live, people on Instagram have taken to the comments of Stauffer’s brand partners, including Fabletics, urging them to reconsider their partnerships or expressing their intent to stop supporting the brands.

A change.org petition has also been started, demanding that YouTube demand the Stauffers (yes, in that order) remove all their monetized content with Huxley from their channels.

I’m predicting that once this backlash reaches a high point, Myka Stauffer will lose a good number of followers and brand deals, at which point she will “quietly” “take a much-needed break” from social media, and return in about 21 days with a post of her biological children talking about gratitude in the caption, and Huxley’s presence will be thoroughly scrubbed from all their channels, as it should be.

The problems with this entire heartbreaking situation are too many to count, but it highlights a serious issue with parent bloggers/Instagrammers and those who make content about their kids: they build their brand and career off of real people who can’t really consent to or understand what is happening. The internet lives forever (or at least until the end of 2020, because I’m not convinced the world is going to make it through another year), and all these children of these influencers are going to find the things their parents said and wrote about them, for better or for worse. This case is most definitely for the worse. Maybe the only time the Stauffers did right by Huxley was when they refused to go into detail about the specifics of what led to him being rehomed, and hopefully, they will do whatever they can now to protect his privacy.