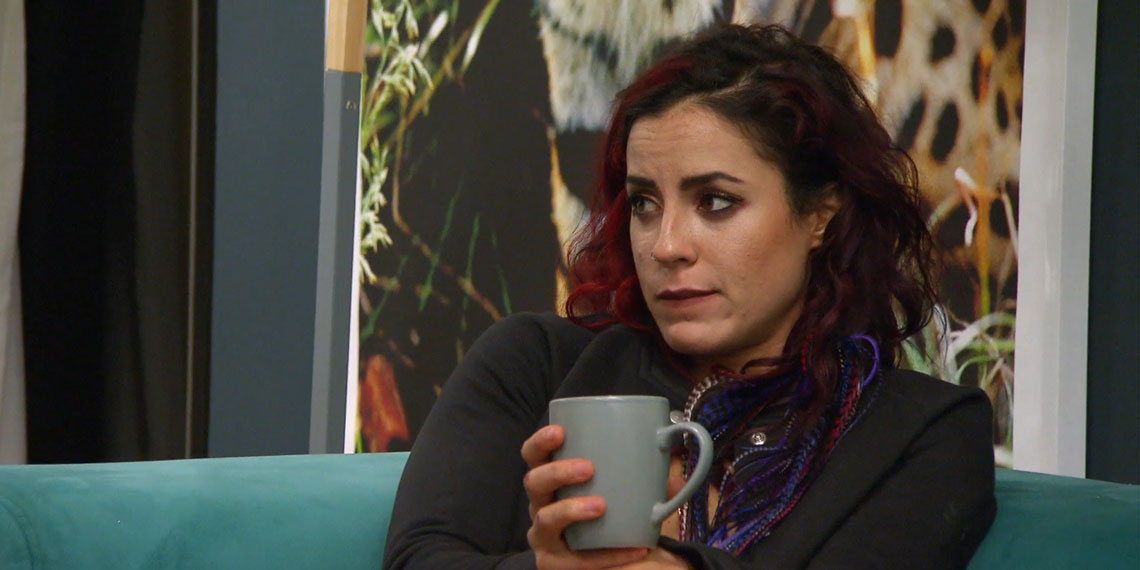 The Trivia challenge last week left Natalie and Paulie in the power seat. Paulie says he wants to wreak havoc with their vote. I laughed just as hard as I did when I saw who he decided to move in with (Ashley and Sylvia) upon rejoining the game.

If there’s one thing we’ve learned about PaNatalie, it’s that they do not discriminate when it comes to alliances. You see, the beauty of coming in after a two-month vacay, is that no one hates you as much as they hate each other. While the audience and #Banony may have been duped into thinking #PaNatalie would be another number for our side, they were wrong… and I was aware.

With #PaNatalie in power, #Banony feels confident that the Lavender Young Bucks will come after me and Cara. Why in the world would you risk going against the “strongest” team in the house so close to a finale? The answer is Shane. Shane knows that if John is picked, John will take the easiest road possible. Obviously, he will, because he’s not dumb like Nelson. I also know that if ANYONE is picked, #CaraMarie lights up as an option for Armageddon. We’re going to be that easy road. With Paulie and Natalie keeping their votes close to their chest, and Banony doing the same, the only way we can pull this off is to work with the other side.

At this point in the game, I’m basically playing everyone. If I were to go against anyone directly, it would give them an excuse they need to pull us into elimination. Perhaps if we didn’t spend 40 minutes last week listening to #TYB chants, we could’ve squeezed in my not-so-sincere apology. But it doesn’t matter anyway. At the end of the day, friends or not, I knew they all wanted to take me to the final… and I was 100% okay with that. Cara agreed to let me take the lead. Our livelihood was in the hands of my former BFF’s, so when you can’t beat them… re-join them.

Back over in Redemption, Kayleigh, Kam, and Brad are speculating as to who will be joining them next. Kayleigh asks if the boys will relocate if Nelson and Shane were to walk in. We are reminded in this moment how much of a hardo these guys still have for #Shanelly. Kam tells us to bring the pity party somewhere else because she doesn’t care… and neither do we. The last time Kyle and Brad came face to face with their opposition (Paulie) they held hands skipping around Redemption and even saved them from going home in the Redemption elimination. Before we head back to the main house for a different kind of pity party, Brad the Dad reminds us of his finance background and Nelson’s poor credit score.

At the bar, I decide it’s best to address the LL’s a bit differently than the last time. However, if things were to pop off again, you know for DAMN sure I am going to milk that head butt for all it’s worth. While ordering drinks I casually drop, “Acceptance feels happy.” This is my way of letting them know that I don’t plan to light the house on fire… again.  Ashley assures me that they are voting for Bananas but I still feel her word is as fake as her weave.

At this point, we have nothing to do but “trust” them since we feel we’re going in regardless. Sylvia and Shane threaten me and I don’t care. Typically I’d pop off but at this point, I need to play nice. I didn’t want to help with their plan, but I wanted to make it seem like I did. Natalie is getting close to Hunter and Nelson so much so that Nelly calls her his girl who’s “a little dancer on the dance floor.” I don’t like Nelson if you haven’t gathered, but I do LOVE watching him on TV.

In nominations, I am in dire need of botox, makeup, lighting, AND WATER. I hide under my blanket as the scene drags on. I’m mortified. I went from 25 to 55 all in five minutes. Don’t judge—you’ve been there too, b*tches. I tell Cara the info I gathered and we have a hearty laugh about how stupid of a move we think it is.

It’s admirable to call out a strong team, it’s also admirable to be a millionaire… but what do I know. Knowing that John and Tony were going in, and potentially winning, we actually told the boys before we left about the Lavender plan. In case they do come back, we need them more than ever. The LL’s follow through with their plan as we gather to head over to Armageddon.

In Armageddon, Cara and I look super shocked, and that’s because TJ let us know that two teams received zero votes. Paulie and Natalie, and me and Cara. HOLY SH*T! They’re actuating doing it. Like Ashley says, “Better them than me.” In the elimination, ring sits to pools and it’s freezing out. BETTER THEM THAN ME IS RIGHT!

Tony and John decide to choose Sylvia and Joss, and I immediately disagree with their choice. DO NOT SLEEP ON SYLVIA. Considering it seemed to entail a puzzle it would have been of great benefit to not only Banony, but viewers at home, to chose Ashley and Hunter, or Shane and Nelson. I smirk imagining all the bickering we could’ve been blessed with.

Considering the number of times Shane yells at Joss, you’d think he was in there himself. I’m sad this didn’t happen and decide to remain quiet for the remainder of the elimination. When you’re playing with both sides, you can’t root for one or the other (duh). I NEED Banony to win—without them, we’re just living in Cara and Marie land. Which BTW, If we DO win this million dollars, Cara and Marie land will FOR SURE be a thing. Horses will roam free, PIZZA WILL BE DELIVERED, and #BYOB will be required so I can get high off of your supply. Hehe.

Sylvia is super confident going into this. Part of me wants her to win. At the end of the day, a male-male team in the finale will crush all of us. In fact, we might as well just lay on the floor when TJ blows the whistle because this entire Challenge has been a CROCK OF SH*T. How Cara and I are still alive is beyond me. Fast forward: Sylvia and Joss win. Woo.

As the LL’s celebrate, John and Tony stand by the fire to warm up. And boy, are they warming up. I’ve never been as attracted to Bananas as I am in this moment. I’m a hater, but I’m also not blind, the guy looks good. Tony has some great one-liners regarding the architects and his humor is truly under appreciated. Tony is one of the funniest guys in the house. Bye Banony. We will miss you… and by we I mean Cara and me.

Bananas lands in Redemption and immediately begins boiling water. He tells Kayleigh about Nelson and Natalie and their cuddle season. As someone who was there, it did happen. Did they take it to an inappropriate level? No… but if that was my boyfriend, any proximity to a woman smaller than 10 feet is a reason to fight. I wish Brad would explain the importance of credit scores to her at this moment so she can know that NELSON AIN’T SH*T.

It’s challenge day, and SURPRISE SURPRISE, There’s a purge. If it wasn’t for *someone’s* inability to walk in a straight line (Nelson). How the hell were female teams supposed to win? Paulie and Natalie crush this challenge, and suddenly I understand why Cara is attracted to Paulie. On a serious note though, this guy is an athlete. Him and Natalie in this game—and any game moving forward—should be considered a threat.

In true Nelson fashion, he f*cks up royally and Cara and I MIGHT JUST HAVE A CHANCE. Nelly gets halfway through riding and rolling logs around, hanging on to it like it’s Shane’s dong. Cara and I are up last. And of course, Mother Nature decides to join the fun. By the time we get up there, it’s raining lightning-ing. ALL WE NEED IS ONE FLAG.

Spoiler: we don’t get any flag. But Cara does make it further than Nelson, so we’re safe. At this point, I was receiving hate-tweets trolling me like “UGH YOU HAD ONE JOB!” First and foremost, I’d bet the prize money that you idiots couldn’t do it. Second, I was in utter shock. I thought Cara was going to take a breath before coming across but she just went for it. I was not prepared. It felt like it was happening in slow motion. Why is no one looking at Joss, Nelson, Shane, or Sylvia? Bring your hate somewhere else, I don’t care. I’m happy I’m not going to Redemption, but sad that I will miss Johnny’s face when Shane and Nelson walk in. KARMA.

We leave off with Kayleigh, Nelson, and John in room and Bananas isn’t backing down. This is the mischievous asshole we know and love. I enjoy watching Nelson squirm. Next week,  Redemption beef will come to a head as two of those four extremely strong teams will finally go home for good. It’s time to SHUT DOWN Redemption, FOLKS! LET IT BURN.

Next week we’ll get a double elimination…. and SURPRISE SURPRISE, a purge. F*CK YOU. GOODNIGHT.