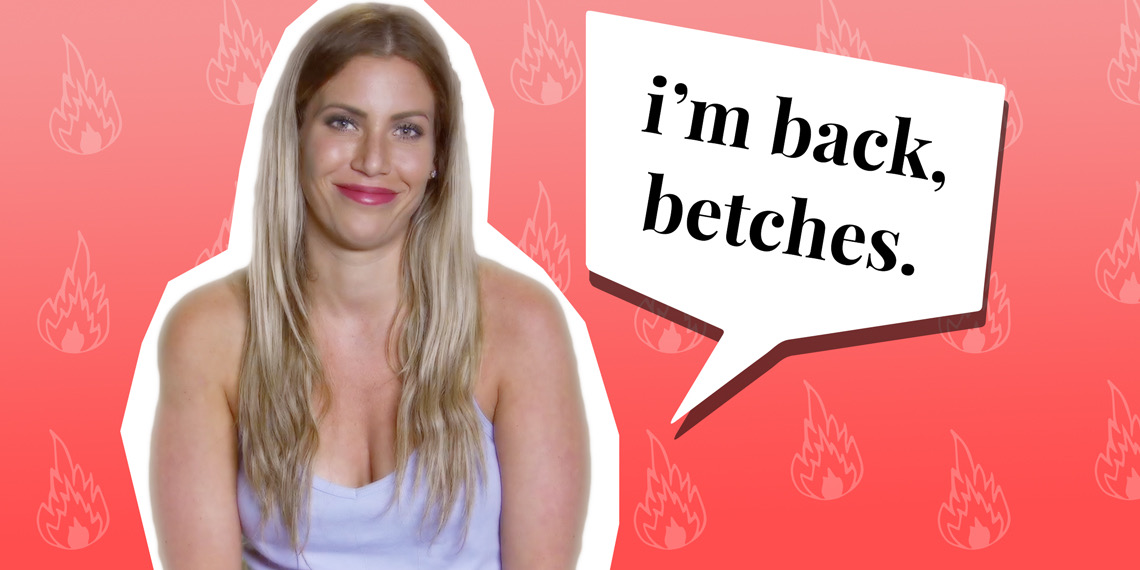 First and foremost: THANK YOU. Last week I wrote my first Challenge recap for Betches, and the feedback was great! This week, I realize I’m a complete narcissist as I want nothing to do with this recap because, well, 1) I wasn’t in the episode, and 2) I went on a real bender this weekend. So while I nurse myself back to life with a Pedialite in hand, let’s dive into The Challenge: Final Reckoning episode 4…“The Affair.”

We begin the episode with a reminder of how lame Kyle has been acting and continues to act over the Cara/Paulie love triangle. Paulie was eliminated last week by #TeamKK, but apparently that wasn’t enough to rid us of this storyline. As a viewer, the more people hate Paulie in the house, the more I like him. This is standard of me if you know any of my previous/current love interests.

PaNatalie arrive at Redemption and they are PUMPED. Not only are they not out of the game, but they’ve been reunited with their besties from Big Brother. They quickly recap the elimination drama and Paulie relays that it was the Kyle/Cara situation that got them voted in. TBH it was more so the distaste for your partner, Natalie, by the majority of the house… but let’s keep this story line dragging another episode. It’s not like there aren’t 209023840234 other things we could be seeing right now. Davonne wonders why Paulie is creating enemies, but HEY, if there’s one sure way to get another Challenge call… that’s it.

At the main house, we are introduced to what hopefully will be a recurring accessory this season, Shane’s hair helmet.

Apparently Shane went off the deep end after Kyle implied that Shane may ALSO need hair plugs before purchasing this robo-cap. Brad asks the burning question, “You got headphones in that thing too?” But the helmet only plays music when connected to the OLD iPod. Here’s hoping Shane gets #UPGRADED to a bluetooth functional helmet after this episode airs.

After a full night of arguing, and Britni reassuring the other Redemption housemates that she still is, in fact, psycho for her ex-boyfriend, Chuck decides it’s time to make nice with his former fling. This makes Brit happy because she just wants to “be his friend again,” and by friend she means “one whom she occasionally swaps bodily fluids with.”

During a serious teeth cleaning (for real, I was impressed by his brushing skills), Paulie realizes Brit still loves Chuck and that he could use this information to help better his game. This is a good idea, Paulie needs all the help he can get right now… minus a cavity search. He proceeds to tell Brit/Chuck that he’s going to tell the house that they’ve been sleeping with each other, and I’m surprised Brit doesn’t flip out… most likely because she too wishes this into existence. #Memories

Serious girl chat is taking place between Kayleigh, Bananas, Zach, and CT at the main house. Kayleigh recaps why she and Nelson had a falling out while the boys enlighten us on different slang words for “vagina.” I have personally never heard “fur burger” as a vagina reference before, but I hope to never hear it again.

Fast forward to a heart-to-heart between Zach and Nelson, and I think my eyes are permanently stuck from rolling so hard. In brief, Zach tells Nelson that in order to have a working relationship on the show, Nelson needs to find himself a “Jenna.” AKA Nelson needs to find a girl who loves him SO MUCH that she will put up with any and all f*ckboy stuff he does. I have a feeling Jenna and Kayleigh can’t relate in this sense, and therefore, neither do Nelson and Zach. NEXT!

In the living room, Shane confronts Johnny about voting him and Nelson in. Johnny retaliates by telling Shane he doesn’t know how to “play the game,” BUT Shane clearly knows how to count, so…? Shut up, John. Where’s Angela to save his storyline when we need her?

At this point I’ve been scrolling Instagram so deeply that I’ve forgotten what I’m supposed to be doing. A Bruno Mars song brings me back to life as we get a BanAngela scene. While Johnny lathers Ang in baby oil, the cast gives their two cents on this budding new relationship. Kam lets everyone know that Angela has a boyfriend at home and should be focusing on her female relationships in the house instead of a fruit. I don’t have much to say about this, BUT I CANNOT wait for the Twitter drama/Youtube recaps this segment will be sure to produce.

We get a glimpse into the dynamic of another house relationship between Kay and Nelson. Kayleigh is ME, and most likely you, when she tells Nelson that she said, and will continue to say, mean things about her ex because he hurt her. BTW: My ex definitely has herpes. Just saying.

At Redemption, life is hard. Britni still hasn’t found pants and can’t pop a pimple on her chest. Jenna then gets a clue from TJ saying “it’s time to see who’s going to be playing in the four horseman of the apocalypse.” I’m not sure why they chose to run with the “Horseman” thing, but it’s weird.

We get a double-cross situation that will allow the team who chooses it to pick their opponent, and I AM PISSED. WHY DID BB pick first?! My dreams of a full Jemmye-driven interview season is slowly dwindling before my eyes.

***Insider info: After this double-cross took place, the rules were changed in terms of picking order***

At Armageddon, the main house and Redemption house are rejoined while TJ explains the double-cross rules. Paulie explains that since he can’t get at Zach and Brad, he will instead go after “their girls.” Amanda calls Paulie a loser in her interview, and I think so too. Clearly you stuck with Big Brother because you’re from….. Big Brother… but keep making everyone in the house hate you.

Yada yada yada … Paulie talks a big game and AGAIN can’t back it up in elimination. Natalie and Paulie lose and are sent BACK to the Redemption house while Jozea/Davonne rejoin the main house. Here’s hoping Day brings those FIRE interviews with her!!

Before I close out this recap, I have an important message to the fans. I know things may have been moving slow in terms of gameplay and a lot of people have complained about the drama thus far—but I promise we are finally where we need to be. NEXT WEEK, The Challenge we all know and love is back with a VENGEANCE!!

Tune in next week to The Challenge: Final Reckoning on Tuesday 9/8c on MTV!