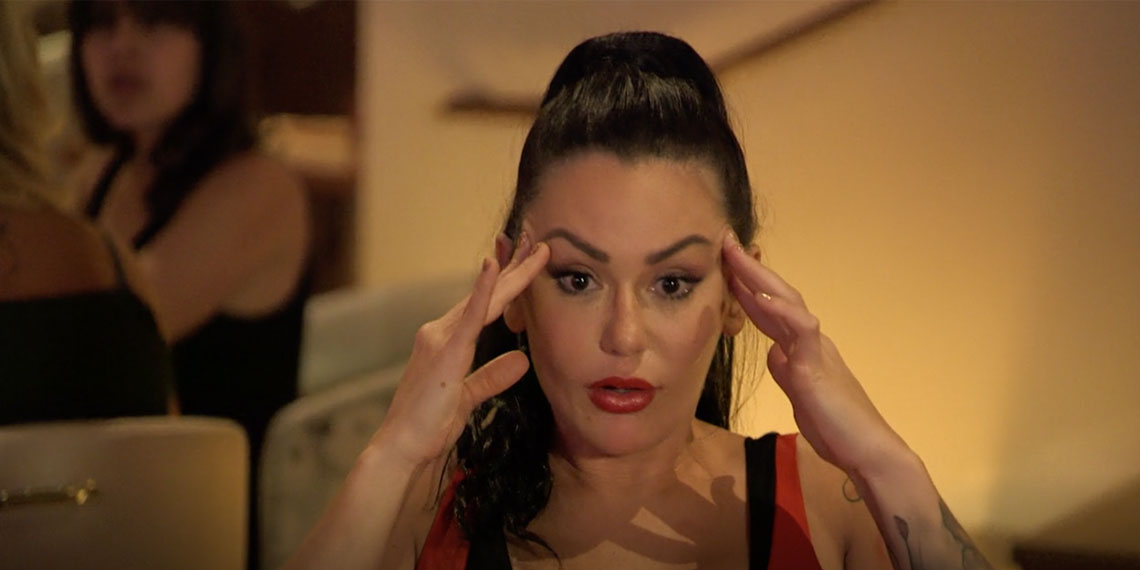 In a week that has been nothing but a Bachelor sh*tshow, I almost forgot about our favorite trashbag guidos. What does that say when Bachelor in Paradise gets more Jerry Springer than Jersey Shore? We left last week with the resident Dirty Hamster arriving at the shore strip. I’m mad at you, Snooki. I don’t need to see a grown-ass woman shart herself on television ever again. I really did not want to see it the first time. But here we are, at Jersey Shore Family Vacation episode five, so let’s just get this recap over with.

Angelina demanded Jenni make her a drink, which I feel like she must have known would end super well. Jenni is now saying something like, “oh you came in hot and I clapped back!” Okay, whatever, you’re both petty.

Angelina: She doesn’t know what it’s like to be me. I can’t help demanding drinks from people who hate me.

Why do they all have nothing but stupid slogan gym tees? Angelina’s says “coffee addict”. You’re on TV, woman, not in yoga class.

Snooki: I like everyone to be friends, no dramer.

There’s a knock on the door and everyone freaks out but it’s just Ron. Then Ron freaks out because he sees Dirty Hamster. Snooki starts sneezing and Vin thinks it’s because they’re both allergic to hamsters. Vinny even has a rash.

They all go down to the pool, including Pauly Hair Gel Bottle. Vin is saying offensive comments using Pauly Hair Gel as a dummy. He’s the worst ventriloquist ever and attempts to hit on women with it. Women actually leave the pool to avoid talking to him any longer. Jenni is sipping her cocktail by the pool while we clearly see Ang and Snooks talking sh*t about her directly behind her in the cabana. Quit making this so awkward, guys. Snooki goes over to Jenni and complains that Jenni did not “cheers” Angelina. Hard-hitting drama, guys. They’re all sitting in silence and Ang tries to dance near them by swaying by herself. It’s soooo cringey.

I was looking for this GIF so I stopped listening. Now they’re going back to the room. I’m assuming nothing interesting happened. Oh nooooooooo, Snooki is for some reason pretending to be Steve Irwin in a super offensive impression. J-Woww is pretending to be an animal. I am dying of secondhand shame.

Angelina apologized for slapping Vinny and then is like, “it was a fun slap, he’s being dramatic.” WTF is a “fun” slap? And then she tried to say she was just super tired so that’s why she slapped him.

Vin in his interview: I had a long day at the office (slap).

It’s like when domestic abuse was seen as okay in the 50’s.

Vin to Angelina: You have a scarlet letter on you. Do you know what that means?

Oh nooooooooo, Vin is going to attempt to explain classic literature to us. Okay, let’s go.

Vin: You know, you come in and you fuck sh*t up, it’s like a stigma. Of being shockingly nasty.

This is not how I remember Hester Prynne.

Vin (in the interview): She’s like, who the f*ck is Scarlet, bro? Tell her to f*cking email me. Who uses letters anymore?

I mean, he’s not wrong, but also, I don’t think Vin understands his own reference. Or has ever read The Scarlet Letter. Or even knows how to read.

Angelina: I was like not trying to start a fight, but then I slapped you.

Sooo seems like you’re trying to start a fight. Ronnie is supervising this conversation in the corner like Dr. Phil and he suggests that they always fight because they want to have sex again. Angelina’s like, “I’m not DTF anymore.” Sure, honey.

Vin: I would only f*ck Angelina if like it was Armageddon. Like the world was on the line. Then I’d do it.

In what context would the solution to saving the world would be to f*ck Angelina, Vin? Seems like you want to do it.

Ang: I don’t even remember your d*ck.
Ronnie:

Vinny now wants to know what his penis is comparable to in the supermarket, explaining that Guido Math means comparing things to penises.

Vin: I’ve never shopped for eggplant at the supermarket? Or a can of spray paint?

OH MY GOD, Sitch just came out in a face mask. He claims the dry humidity is ruining his skin. So like. How? Dry and humidity are opposite things.

Snooki: I need an insane asylum after this.

Snooki sees Jenni wearing makeup and a dress and not looking like a homeless person. It’s so shocking considering Jenni was dressed by Walmart for the last six months that she literally is like, “why do you look like that?”

Who knew the secret to class was red lip gloss?

Jenni and Snooks are going gambling but they don’t invite Angelina.

Snooki says she’s drunk then laughs maniacally. Then she wants to watch the go-go dancer in the middle of the casino.

Jenni: How do they concentrate on betting?
Snooks: (horrible Southern accent) I dunno Marge, if I had a peeeennniiiisss, I’d be watching their ver-gina instead of the cheeeeps.

K. They start gambling at the slot machines.

Snooki (in the interview): Every time you go to a casino, you see the old ladies, they’re best friends, they’re in wheelchairs, they can’t even breathe. But they’re gambling and they’re drinking.

I spent most of my childhood living in Lake Tahoe and so I grew up in casinos and that is 100% accurate. Not because I gambled as a child, but because our only movie theater or like, ice cream place was in the casinos.

Snooki: That’s gonna be me and Jenni when we grow up.
Me:

Back in the room, the boys are going out with Angelina. Ronnie is wearing a shirt with all kinds of weird designs all over it.

Vin: It’s like from The Lion King or something.

Then Vin freaks out because he forgot his boyfriend, so he goes back for Pauly Hair Gel.

Jenni gropes a naked-ass statue and says sadly, “That was like my ass.” This is why you don’t have kids. They meet up with the guys and Ron calls Jenni “Jessica Rabbit” which as everyone knows, is a huge compliment because Jessica Rabbit is the hottest animated woman ever. See, Jenni? Everyone is shocked that you even know how to get dressed.

The girls take a cab together and Snooks immediately is like, “Angelina, why did you call Jenni a whore?”

Ang: She called me a dirty hamster.

Ang: It’s not like I was lying.
Jenni: I’m a whore?
Ang: You were acting like a f*cking whore.
Snooki: She’s married with kids, how is she a whore?

Seriously, she doesn’t even seem like she has sex with her husband, much less anyone else.

Ang apologizes and they’re all like okay. For now. They all arrive at Giada’s, which is a fancy-ass place in Vegas. And they still have a chair for Pauly Hair Gel. Vin basically cries about how much he misses Pauly. Then there is a black and white montage of Pauly and Vin’s love.

Angelina interrupts to say that she’d sleep with Pauly, but not Vinny because she already “did him”. Then she says that Snooki and she are “Boob Sisters” and “Sex Sisters”. Angelina then wants to pull her breasts out at this nice restaurant to compare, because since they went to the same surgeon, she wants to see if their breasts look the same. Why is this woman constantly trying to show us her body parts in public? Oh, then she wants to feel Jenni’s boobs.

Jenni: This is exactly the dinner I did not want.

I don’t blame her, this is kinda sexual harassment.

Ang is now chanting, “SHOW ME YOUR TITS”. Jenni is annoyed and worried they’ll be kicked out for being trash. Fair point. Jenni legit gets up and joins someone else’s table. I’m gonna assume those are producers, not just randos. They leave and go to the nightclub, Drais. Ron is very aggressively dancing.

Ron is making the scariest face in the world.

Jenni: I don’t know how to explain it. It’s just not flowing.

Ang then goes and sits on Jenni’s lap and Jenni is like f*ck no. Is Ang trying to f*ck Jenni? Is that what all of this really is about? Angelina then chases Jenni and tries to pull down her shirt (she claims she was trying to put ice down it? Unclear.). Ummmm, this is rapey, guys. Jenni grabs Ang and puts her in a headlock. Good for Jenni, this is totally sexual harassment at minimum. Angelina escapes and then smacks Jenni and everyone goes, “ooooooooooooh”.

Angelina is literally mad at Jenni for not letting her put ice down her shirt. Like. Ang, you’re creepy. She’s not interested. Stop it.

Everyone goes to bed. The next scene is a producer waking up Vinny to tell him that his Uncle Sal passed away. Was that Uncle Nino? Is this a different uncle? Oh, it’s a different uncle. That’s sad. So Vinny is now going home. That sucks, Vinny’s commentary is one of the only reasons to watch this garbage.

Snooki wakes up looking like hell and Jenni informs her she ate a burger and fries on the toilet last night. Ew.

Pauly is coming back and he still has no idea that Angelina is here and Vin is gone. He comes in to find Angelina “marinating” his bed, as Ronnie put it.

Pauly: This is disgusting. This girl’s hygiene is questionable and I’m too OCD for that.

This is coming from a man that often has sex with random strange women.

Pauly: Did you wash those panties since Miami?
Snooki: She’s not wearing any.

Sorry Pauly, you’re going to have to throw the whole room away.

Pauly: Now I’ve got to burn that bed.

Glad we’re on the same page. Pauly is now sad that Vinny has left, so he tapes a picture of Vin to a piece of string cheese. Because it’s keto. It’s a Keto Guido cheese stick.

Snooki: I wish me and Jenni were this cute, we hate each other.

Pauly then calls the maid service.

Pauly: My bed was soiled last night. There was a Staten Island Dump in it.

Pauly: Can they change the mattress? Bring the hazmat suits and flamethrowers.

And the dancing lobsters.

These guys show up with gloves and buckets and everything to change Pauly’s bed. They put it all in a hazard bag, which is just good sense. Pauly is wearing Keto Guido Cheesestick around his neck on a chain.

Then, Snooki decides because Jenni isn’t being fun, she wants to invite her friend Joey to come to Vegas. Like, are they that bored with each other that they’re inviting random friends now? Jenni is even more annoyed because Snooki brought Angelina, and now this weird friend of hers.

Jenni: This is Family Vacation, not Third-Wheel-Friend Vacation.

I mean fair, I have no interest in this Joey. Jenni is so fed up she’s leaving early.

HOW ARE WE ON THIS STUPID VIDEO STILL? Jenni, let it f*cking go, you crazy. These aren’t your kids, they don’t have to make you a Mother’s Day video and it’s super f*cking weird you’re offended by this?

Anddd it’s over. I guess we’ll see if she really leaves next week.