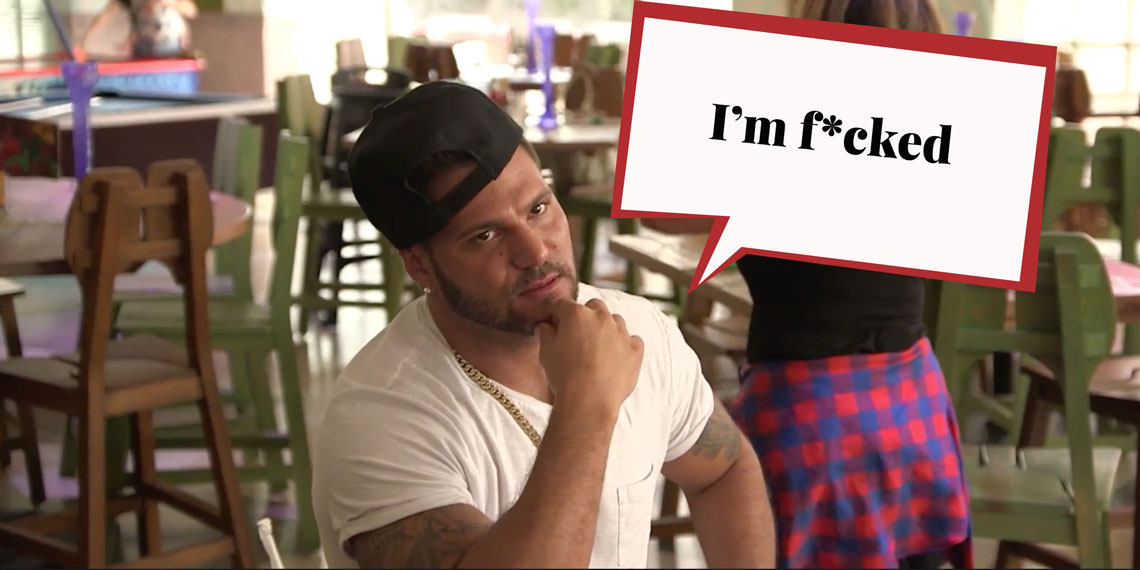 Here we are, friends, Jersey Shore: Family Vacation episode 5. Did Ronnie fuck the Russian hooker? I’m going to say yes and he’s going to lie about it. He’s v v charming, and by charming, I mean repulsive lying pig, so his decisions will be in character.

Aw look, Pauly is Ron’s conscience. Except Pauly’s saying Ron “doesn’t want to do this”, and yet he very clearly does.

Is Ronnie somehow unaware he is on camera? He literally just told the girl (as he’s walking her out) that “believe me, I wanted to finish.” Like, the fuck. You’re being recorded. Am I not being clear? YOU ARE BEING RECORDED. Your baby mama is going to watch this and unfortunately she’s stuck with you forever. Or like, at least the next 18 years. Don’t have children, people.

Ronnie is complaining that he isn’t ready for marriage or for relationships, like SPOILERS dude, you actually do not have to do these things. If you want to fuck around, do it. Just use protection and don’t tell someone you’re committed. Better yet, get a vasectomy. Is this somehow difficult to understand? What the fuck.

Ohhhhh my God, is this woman still with Ronnie? Is she? Particularly after tonight? He just cheated and now he’s talking shit that she’s not the one, he doesn’t love her, etc. Ronnie just admitted he wants to be with Sam. Jesus, take the wheel. Also? Btw? He isn’t with Sam because he cheated on her multiple times. So he was with who he is now saying is the love of his life and he still cheated. That means he’s just a piece of shit.

Jen, serious talk here. I know you’re Ronnie’s baby mama. I know you want help with this kid. But he is a fucking moron. Run, bitch, run.  I should be a marital counselor. I cannot believe people are even this dumb.

Oh shit, I forgot about the girl who threw up on the couch. She’s still there and she’s still throwing up. Guess she didn’t make it to class. Should they like… alert someone?

I was like, what, how late did you guys sleep? BUT NO, she means sunrise. They are getting shitfaced at 8am. Go to bed, children. Oh. Oh nope. They’re going into the ocean. What better to do when you’re drunk besides drown and die?

Ronnie: I’m just going to cancel cable so Jen can’t see me confess my love to my ex-girlfriend who also hates me for cheating on her, and say I don’t love her, and say I wouldn’t be with her if I didn’t knock her up, or hookup with another girl solely because she was naked.

Cable is clearly the problem, you problem solver you.

Why does Jenni sound like an old lady smoker? Her entire aesthetic is very off. I can’t get used to it.

How, HOW are Snooks and Ron still standing? They look insane and they are now harassing children while so drunk and falling over. I really love Ron looking so miserable with his ridiculous party balloon hat. Now he’s looking pensively at the balloon hat. Can you just hear the producers? “Hey, look at the balloon hat like you’re contemplating your bleak future.” Just kidding, I’m sure they don’t say words with more than two syllables to Ron.

Sammi isn’t even here and somehow the entire season so far is still about Ronnie and Sam.

Weirdly enough, when Vin and Pauly talk about how bad Snooks and Ron smell when they roll in at noon, I actually already pictured how bad they smelled. They just look like they smell horrible. Let’s be real, Ronnie always kind of looks like that.

Ron: I’m calling Jen rn because I possibly disrespected her.

Okay, what happened to Ronnie calling Jen? Now he’s in the living room basically telling Yo Mama jokes to Mike. Guys, none of this is interesting, let’s get to the point.

This yacht is way too chic for Jersey guidos, like they’re supposed to be peeing on the floor of shitty clubs, not doing bougie shit. I don’t need to watch rich people being rich, I live in LA.

HE FUCKING DOES, Deena! I forgot you were even here. Vin, I say this every time, but please start eating carbs again. You are sooo skinny and so tired looking. It’s like guido Edward Cullen.

Mike wants to propose to his gf because she’s stood by him through everything. He really should because I don’t know many girls who would let someone dump her to go on a TV show where he fucked a bunch of girls, become a drug addict, and then commit fraud, and maybe go to prison, and she still doesn’t think she can do better? Who did she turn down? The only woman sadder than this is Jen.

What I want to know is how did it take this long for the guys to realize that they are famous and are followed by paparazzi and fans and that people will be taking pictures? Obviously there are pictures of you groping Nipple Girl, Ron. Of course Jen is probably stalking the shit out of you. I’m actually a little proud that she’s ignoring his calls. She does have a little self-respect!

Ronnie: If it’s done, it sucks because we’ve put so much effort in. Like, I was putting in so much effort for her to not find out about my cheating. Or my love for Sam. It was just so much effort.
Mike: He shouldn’t have done the crime if he can’t do the time.

Mike: Oh fuck, I should not have said that.

Men taking responsibility for their FUCKING ACTIONS. It’s a thing, guys, look into it.

I love that Ronnie decided it’s probably over, so he might as well fuck someone tonight. Amazing. Amazing logic.

Sidenote, I do really enjoy calling Mike “The Incarceration” instead.

Oh fuck, The Incarceration’s gf Lauren is spilling the tea that there is an entire Instagram account dedicated to them at the clubs. There are videos of Ronnie grinding on Nipple Girl. Of course there are. People are so fucking savage, they are tagging Jen in the comments. I mean, she needs to know, you POS. These Instagrammers are doing the Lord’s work.

Ronnie, you definitely earn your title as the President of the I Am Fucked Foundation. Quit doing stupid shit where you’ll obviously be caught. Here goes another week of Ronnie fucking something up. Let’s see what he fucks up next week.