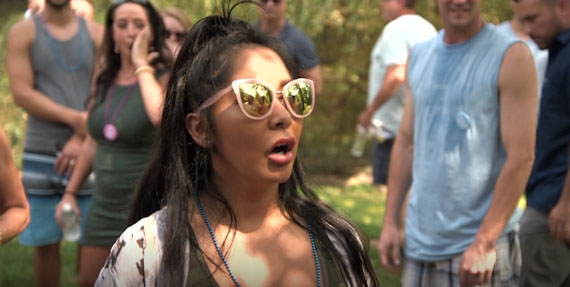 ‘Jersey Shore Family Vacation’ Recap: I Always Wanted To Be On TMZ

So we left off last week with Deena still being pregnant and Angelina taking her ring off and blah blah blah. Deena is having a gender reveal party, which like, it’s super weird to have a party dedicated to the genitals of your future child. No? Like if I had a vagina party, that would be “offensive”, but if it’s for a baby it’s ok? Smh what a double standard. ANYWAY. Snooki tells her daughter, “Remember when you were in my belly and I pooped you out?” One, no sh*t, she obviously does not remember. Two, you need to go back to sex ed.

Mike and Generic Blonde Lauren show up, of course dressed in pastels. Mike says it’s his cheat day, but like, every day is a cheat day at this point. Vinny doesn’t know what a gender reveal party is, which like, hey Vin, it’s self-explanatory.

Mike is enlightening Vin with some of his wisdom. Should you take advice from someone about to go to prison? Imma say no.

Mike: If you don’t plan, you plan to fail.
Vin (to Generic Blonde Lauren): Do you have to hear this all the time?
Mike: A smooth sea never made a skilled sailor. Life is a marathon and not a sprint. The waves are not gonna stop but you can learn how to surf. You can throw me to a pack of wolves and I shall return leading the pack.

Mike, throw out your Quote of The Day calendar. Please, God.

Apparently getting run over by a car doesn’t stop Ronnie from crashing Deena’s party. What would a party be without Ronnie crying about himself the entire time?

Pauly has a bunch of balloons of his face delivered for the future “Pauly” or “Paulette” but he didn’t bother showing up. That’s exactly how I like to do baby showers. Avoid, but send a gift.

Ronnie shows up and scares the sh*t out of Jenni, who was not paying attention when he walked literally up behind her. Jenni would definitely be the first to die in a horror movie. No one really seems very excited to see him, probably because we’re all equally sick of his sh*t.

Vin: Seeing Ronnie is like seeing Big Foot, like you hear about him on TMZ every day.

Ronnie basically tells Deena that he’s only there because she was so crazy about him not being around when her dad died. And she finds this flattering.

Vinny wants to know how Ronnie was removed from the car. I assumed Jen somehow threw him out while the car was moving. Apparently, he was exiting the car and she just started driving.

Ron: It was an accident.
All of us:

Mike: I hate when that happens.
Ronnie: It was a bunch of unfortunate events.
Vin: It was just a misunderstanding. He just got stuck in the seatbelt, got dragged on the highway, over the divider, popped three tires… Happens to everybody.

Ron tells them he and Jen are trying to work things out. If getting run over by a car is not enough to breakup with someone, I don’t know what is.

Good thing you guys don’t have jobs. GET OUT!!

Okay, now we’re getting to the gender reveal part. The box starts smoking (?) and it’s blue. It’s a boy! But like, why was it a wrapped gift that was set aflame to reveal the gender? Is that how gift boxes work?

Deena sees three deer, because you know, they’re outside. She is immediately, like, “Oh my God, I knew my dad would be here.” Like, your dad is a deer? Also, your dad is three deer? Are they like horcruxes? He split himself three ways to make an impression?

It’s Mike and Pauly’s birthday and they’re all driving to Dave and Buster’s.

Vinny: I’m not fighting with the hamster. I’m leaving the hamster in its cage.
Angelina: Do you think Vinny likes me?

You guys seem to be on the same page.

They’re all at dinner and Mike is complaining that his clothes don’t fit. He thinks maybe Generic Blonde Lauren shrunk his clothes in the wash. I’m sure that’s it.

Angelina announces that she’s bringing her fiancé to Pauly’s show in Atlantic City. And then immediately makes sexual innuendos to Vinny. Ronnie says Jen might make it. That’ll go over well. Mike gets a bunch of diet things for his birthday gifts, like a food scale. He also gets things to remind him about his impending prison sentence, like a cop hat. Pauly gets a megaphone and a giant cutout of Vinny’s face.

Pauly arrives to Atlantic City and they just have balloons and tiny Pauly D faces everywhere. Everyone bitches about the impending doom of Ron bringing Jen and ruining (and possibly endangering) their lives. All the couples begin to arrive to Pauly’s room. Mike and Generic Blonde, Angelina and her fiancé who looks like a giant thumb, Deena and Chris, Jenni ALONE. Ominous.

Ronnie arrives. Also alone. Seriously though, how could he even expect his friends to be nice to her after Cargate?

Angelina bitches to her Thumb Thumb (like from Spy Kids, do you remember this movie?) that everyone thinks they fight all the time and she wants to prove them wrong. The only reason they think that is because she told them this. Then she snaps at him to not be a moron in front of everyone. You guys seem super happy.

Ronnie and Mike are arguing with each other and then Mike congratulates himself on not making fun of Ronnie for almost losing custody of his child. What a guy. Mike then kind of forces Ronnie to apologize to him for his behavior in Miami.

Mike: Ronnie is being the bigger person, which is saying a lot, because he’s short and has no neck.

They all go to dinner at Gordon Ramsey’s Steakhouse. Vinny and Angelina are yet again flirting awkwardly but it’s even worse because it’s in front of her Thumb Thumb.

Vin: Oooh Angelina got an extra dirty martini.
Angelina: Vinny doesn’t think he’s from Staten Island.
Jenni (to Thumb Thumb): Did you know they did sex?

I’m gonna bet he did not. Thumb Thumb just laughed it off, which I’m shocked by.

Mike gets heart eyes at the meat. He orders meat that previously listened to classical music. And 20 sides. He’s like, it’s fine, I’m on vacation. Like when is he not on vacation? Thumb Thumb starts snapping at Ang. Heeeere we go.

Jenni asks how long they were dating before getting engaged. He says a year, she says seven months.

Vinny: I’m glad he’s here because he can argue with the dirty hamster and I have the night off.

Angelina is bringing up a fight they had where Thumb Thumb got a hotdog and didn’t share with her. Tbh, I get that. That’s grounds for breaking up for sure.

Pauly loudly announces that their bickering is unkind to Mike’s steak, who previously listened to classical music, but now has to sit through this.

Ronnie bails on the dinner looking crazy and texting vigorously. Like, stop talking to her, you stupid, stupid man. Ron’s texts keep going off and he’s making aggressive faces and shaking at the table.

Ron: So Jen’s in town and I want her to hang out with us this weekend.
Everyone:

Before or after the car dragging?

Vinny: She can come, I always wanted to be on TMZ!

Wait. It ended. I thought this was the finale? This show is never ending. I’m sure this will go over super well. Can’t wait!