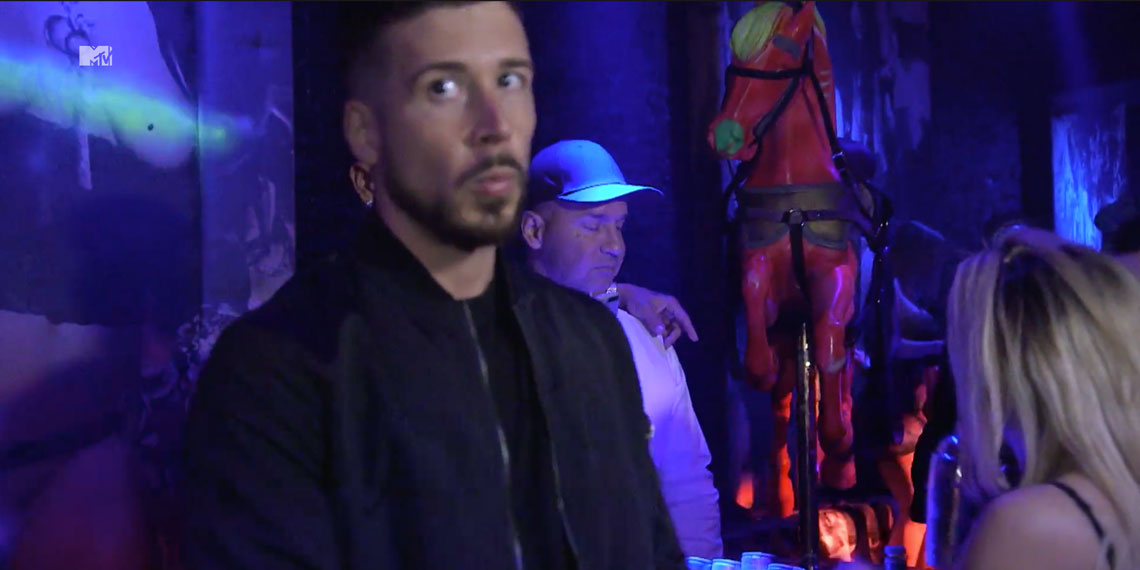 In this week’s edition of Men Being Pigs, aka Jersey Shore: Family Vacation episode 8 we left off with Vinny’s mom trying to justify him wanting to fuck around on his Instamodel gf, with the simple resolution of just don’t tell her shit. Ronnie is very on board with this realm of thinking, and I predict long and happy love lives for both of them.

J-Woww is yelling at Ron, saying anyone that dates her daughter should raise her up so much and otherwise he can fuck off. Can she please screen every guy I go out with from now on?

Ron is crying about how he can’t be perfect, k I’m sorry, but does Jen really have crazy expectations for him to not fuck other women? Like is the bar that high?

Snooki is really stoked to go to a strip club. Do I just not get the appeal of strip clubs? Like all I think about is dirty vagina on everything. Sue me. Also, if you’re a straight woman, what is the point? Unattainable body envy?

Jenni is molesting strippers. Ronnie is really into it. All of it is gross and I want it to stop. Oh cool, I thought nothing could be trashier than Jenni groping strippers, but then Snooki steals money from the stripper. Snooki who has children and a steady income via TV show, steals money from the stripper, That is just fucking mean. Also begs the question yet again, is she unaware she’s being filmed?

Snooki: Why is no one getting the money?

Because people have class. Which is saying A LOT of the strip club crowd.

Pauly is dancing with strippers and it’s like, okay finally, when is Pauly going to do something interesting as the only single guy in the house? All the men in relationships are the ones fucking around.

Oh it’s because Pauly wants to find a wife. I mean yeah, do that on TV, Maybe he should go on The Bachelor.

Okay, I fully made that joke AND THEN Snooki said she was going to collect a bunch of bitches and then let him pick like The Bachelor.

Jenni and Mike are ring shopping together. This is v v boring. The rings are like $45,000, but Mike just commits fraud, so money doesn’t matter right?

Pauly is trying to find a lady, and tbh, I don’t think Snooks and Deena are the best people to woman-hunt for him. ALSO, he said he wants a girl with dark hair and light eyes, which makes sense as to why when I was at the Jersey Shore premiere party and I was talking to Pauly, Ronnie was making weird faces and inappropriate gestures at us. I also have dark hair and light eyes. Also, I feel like this is a spoiler that this doesn’t work out for Pauly. Sorry.

Oh, here’s the part where they inflate giant blue balls and wear them and bang into each other. This is one of those plot points that I feel like a random producer is like, “WOW. this would be so wacky and crazy!” K, so you guys might think it’s fun or whatever, but this adds nothing to the story or interest. I have zero fucks to give on this. We are reaaaaaaaaallly reaching for drama right now.

Except for Snooki saying she looks like Mama June. Those are fighting words.

Vinny is soooo skinny now, this is why you guys should eat carbs. But I appreciate that he prays for Pauly, in his new role as Guido Jesus.

I had no idea what it meant when Vin and Mike were saying they need to decorate, but apparently it’s that they decorate their table with women. K. *Adds to the list of reasons I hate men* Vin is talking about putting his face on strange women’s asses. His gf must be thrilled. He just told a girl that she’s like a “hot Britney Spears.” Soooo are you saying Brit is not hot?

Also, these guys are wearing gigantic chains, they are two steps away from being Flava Flav at this point. Oh cool, Vin is getting Bottle Girl’s number. Do they understand how relationships work? No? What about how cameras work? Bc this shit is all being filmed, you FUCKING idiot. Mike literally drags Vin out while he’s confessing his love to the Bottle Girl and says he wants to marry her. Tbh, I don’t think the problem is drinking, I think the the problem is he hates his fucking girlfriend and wants to marry complete strangers. Pretty obvious and my major was art, not psychology.

Mike is all of us rn:

Vin is so hungover he’s making me hungover, and I’m still drunk because I had five skinny margaritas at the bar tonight, so he is killing my buzz. Vin claims to remember nothing about getting Bottle Girl’s number, so OF COURSE he calls his Instamodel girlfriend to TELL ON HIMSELF AGAIN. Wtf, did we not learn anything from last time? Why does he do shitty things and tell on himself? That doesn’t make her happier, try not fucking up perhaps?

Oh noooo, they are now holding signs up to try to find Pauly D a girl on the side of the road. Wow, if these were the standards, I can see why Ron was so excited by our brief conversation. Ronnie says there are girls everywhere and he can scoop up like 10 of them, and it’s like, well yeah if the bar is on the ground, everyone is super hot, Ron.

They find no one to love Pauly so they make him cake. I mean fair trade, that’s what I do every night, too, when men disappointment me which is always.

I find Mike more and more relatable every episode???

Pauly’s excitement makes me sad. It reminds me of my own failed hopes and dreams. People suck.

WHAT THE ACTUAL FUCK.

Vinnie is dressed like a very, very scary woman, and also did he steal Sammi Sex Doll’s wig? Vin and Pauly have always been very clearly in love, so they might as well just go for it at this point. Also, Vin has never showed any interest in Instamodel, especially compared to his love for Pauly.

Vin calls his Instamodel who very obviously despises him yet again to find out that she still despises him. I mean, yeah, I feel like we knew this? Must we call her again and again to discover this?

And we’re left on a cliffhanger that there are only six episodes left—wtf—and Angelina, human garbage bag, is coming back. 1) How dare you? 2) Why? I guess we’ll find out next week…