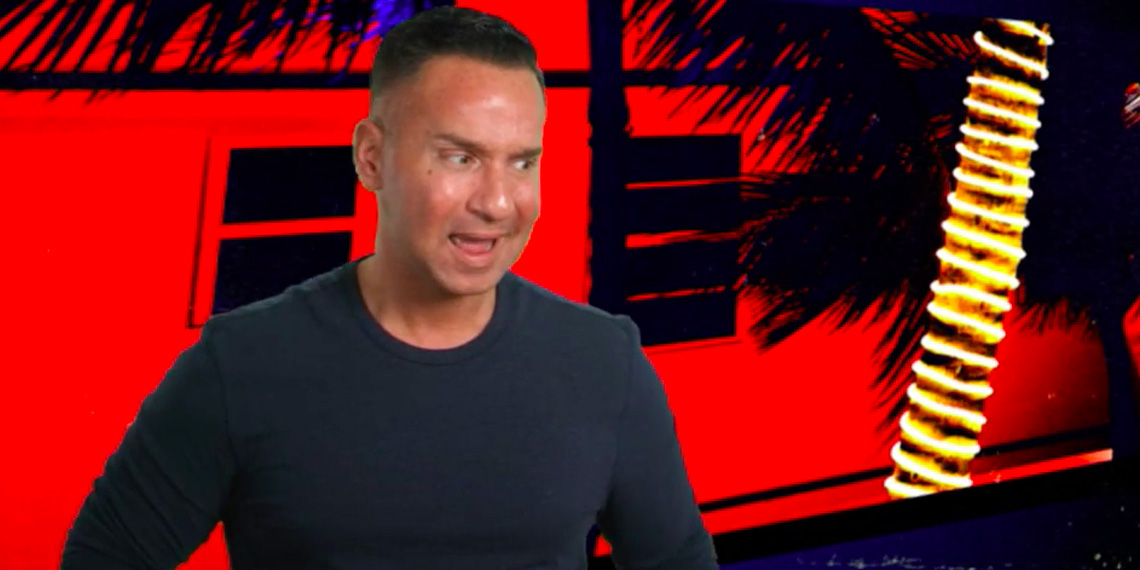 We left off last week on Jersey Shore: Family Vacation with Ronnie crying because Mike is getting engaged and he’s still a POS. I mean, you could try just not cheating on your girlfriends, Ron, then maybe things would work out for you too? Jen freaked the fuck out about Mike being ungrateful for her basically doing his proposal for him. Like, call me old fashioned, but I feel like if you don’t care enough to organize your own proposal, you probably don’t want to get married that much?

Mike: I wanted to tell Jenni to fuck off but then I realized Smeagol has the ring!

I’m not nerdy enough to fully understand this reference as I’ve never seen Lord of The Rings (sue me). I’m just going to assume this is a LOTR reference, even though I’m pretty sure that scary little ring-stealing creeper was named Gollum. Honestly, I’m very impressed right now. I didn’t think Mike would have the mental capacity to follow a complex story like LOTR. Are there even naked women in it? Oh wait, I mean, funfetti cakes? Actually, I tried to read The Hobbit once and I gave up around 130 pages when they still had talked about nothing but food, so it totally makes sense Mike is into this franchise.

Jenni at that dinner:

Mike does a classic bitch move by talking shit to all his friends about Jenni and then cuddling up to her two seconds later, saying he’s so glad they made up. If Jersey Shore doesn’t work out for him, he could always join Real Housewives. The girls are taking Lauren out and the guys are helping Mike get the proposal ready and Ronnie is contributing nothing because he’s too busy crying in his bed. Mike is mad because he considers Ron a brother. They literally do nothing but fight and insult each other, which is exactly how me and my siblings treat each other, so that’s fair.

The girls are telling Lauren she’s a saint for standing by Mike through his many struggles, drug problems, tax fraud, etc. That’s super weird, because to me that’s called “being a dumbass”, and potentially in the legal world, “an accomplice”. But I guess it worked out for her? Mike’s only true vice now is food, and at least he can cook.

The guys are shopping for clothes, the girls are getting hammered while getting their hair done. Turns out, I have no interest in proposal preparation. Mike is buying $1,000 worth of flowers, so I’m beginning to understand why he couldn’t pay his taxes.

Ronnie is still complaining about himself. How does he find so many women willing to fuck him? He is sooooo boring and whiny and pathetic.

My exact feelings on Ronnie’s storyline:

Why the fuck is Ronnie wearing his shoes in his bed? It’s like he just constantly finds new ways to disgust me. Ronnie is all, “oh I try to pretend that Jen and I’s relationship is so perfect.” Is… is he serious? All he’s done is cry about how much he hates her, how he doesn’t want to marry her, how he’s not that into being a father, and how he ruined things with Sam, who he called his soulmate. Ronnie, I assure you, not a single person has ever thought you and Jen had a perfect relationship. Or even like, a decent relationship. Not even a below-average relationship. It is the absolute worst.

I completely spaced out during this whole “getting the proposal ready” sequence. Except when gigantic balloons were delivered, in which case I said to myself, “What is this a child’s birthday party?” Mike and Lauren are at dinner and the roommates are fucking around and not doing everything fast enough. I really, really like how they setup everything and Mike goes to dinner? Like, how do I convince my friends to do everything for me while I eat? It’s the dream.

The boys emerge in matching shirts and they look like servers at a nice restaurant near the beach. They come up with a horrible little song to match.

Well it better be, they spent three episodes pretending like it was going to happen and it did not. Lauren and Mike walk in on a white carpet with rose petals, and Waiter Vinny escorts them to the backyard. She sees the balloons and is like, “OMG I LOVE PINK BALLOONS”, so okay, yep, Lauren is a child. This isn’t really a surprise proposal because she obviously knows what’s going on at this point right? Oh no, there’s a slideshow. Omg, it’s like a PowerPoint presentation. Complete with transitions.

Mike: You’re my best friend, better half, you make me a better person.

Okay, not to be pessimistic, but like that is literally what you could Google for “generic proposals”. Whatever, we already knew Lauren’s standards were low so she said yes. Then Vinny gave her a cookie. She was thrilled about the cookie. This is exactly why I think of her as an adult baby. This is when Pauly starts the club music. So romantic.

This is when I’d make some joke about their inevitable divorce, but if she’s going to stay with him through weight gain, cheating, prison, drug addiction, and breaking up with her to fuck randos on a TV show (more than once), I don’t know what else Mike could do to her that she wouldn’t be okay with? Like, where is that bar set? Murder? What else is there?

The guys are super excited about Mike’s engagement but they are more excited for Cuban food. Mike puts more effort into ordering his meal than he did for his own proposal. They’re all talking about what a great vacation this has been—oh shit, is this over? Oh wait, we’re on Jersey Shore: Family Vacation episode 13, so next week is the season finale.

I feel majorly ripped off, because Pauly, Jenni, and Deena did basically nothing all season. BUT WHATEVER, FINE. The boys talk to Ronnie about Jen.

Pauly: What are your feelings?
Ronnie: Well she loves me.

Ronnie: If we didn’t have a baby, we wouldn’t be together.

Mike has directed himself as the voice of reason, talking shit on how Ron is an idiot and ruining his life. I mean, I agree with him, soooo. Yeah. I feel like all this is leading up to Ronnie having a total meltdown for the finale. Here’s hoping!