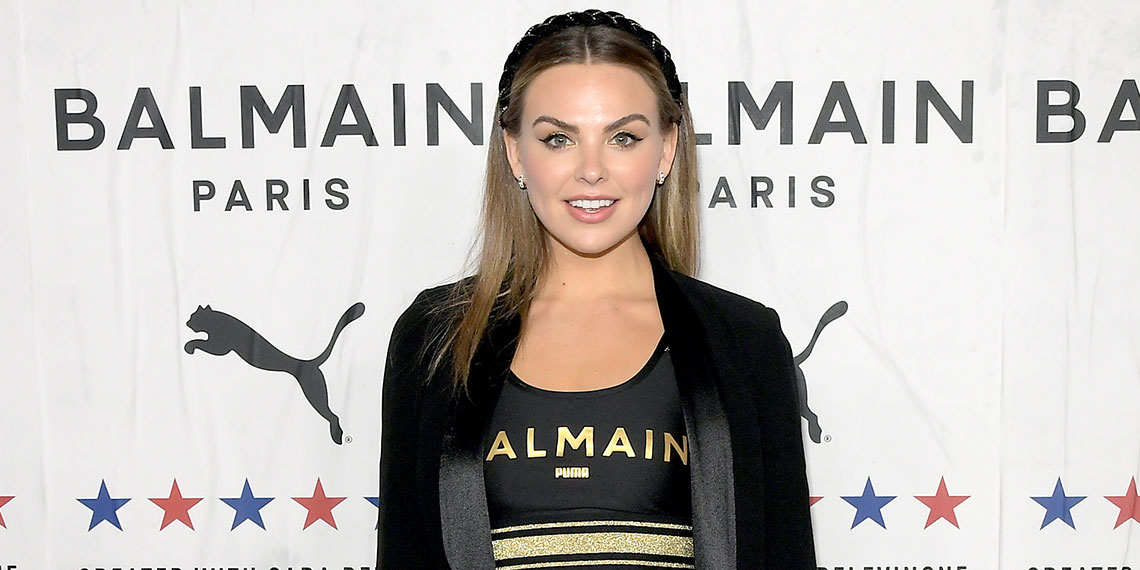 UPDATED: How Bachelor Nation Has Responded To The Hannah Brown Controversy

As you may know, I usually love documenting the messy behavior of our favorite (and least favorite) Bachelor alums. From Amanda Stanton maybe stealing a Chanel bag to TikToks that make me want to die, it’s usually a fun ride. But over the weekend, things went from fun to depressing real quick. On Saturday, Hannah Brown said the N-word on Instagram live, and the resulting fallout has been anything but fun to watch.

On the IG live, Hannah was trying to learn the TikTok dance to DaBaby’s song “Rockstar,” and she said some of the lyrics that happened to include that word. When people on the live first called her out, she said she was sorry, but also that she didn’t think she said it, and she was also laughing the whole time. She later said she would “never use that word”, and that “y’all can think I said whatever I did or think I’m something I’m not, but I’m not that.” Yikes. On Sunday, she issued more of an actual apology, but the whole thing has just left an awful taste in my mouth.

Aside from all the reasons why this is obviously not okay, it’s been interesting to see which members of Bachelor Nation have spoken out publicly. While many have sadly said nothing, at least there are some people in this weird world who have their heads on straight. Here are the most notable reactions.

Rachel Lindsay has got to be one of smartest, most well-spoken people in Bachelor Nation, and she also happens to be the only black lead in the history of the show. With that in mind, I was really interested to hear what she had to say about this situation. In an Instagram Live video, she said she was personally offended, but rather than call Hannah out, she reached out to her directly. Rachel asked Hannah to address her comments on video, saying, “When you’re bold enough to say the N-word on your platform… you need to be bold enough to use your face, on camera, and apologize in the same way that you said the word.”

Understandably, Rachel was disappointed and hurt when Hannah only apologized through a text post on Instagram stories. This may seem like a small thing, but there’s something important about showing your face and admitting you were wrong. In her video, Rachel said she’s “tired of feeling like I have to be the one to speak,” and I totally get it. It’s not fair for pressure to be placed on her to react in these situations, but she did an excellent job of communicating her feelings.

Bekah was one of the first people in Bachelor Nation to publicly comment on what happened, and she had a lot to say throughout the day on Sunday. First, she called Hannah out (without naming her) in a couple of stories, urging that we need to do a better job of holding people accountable. She also addressed the people who apparently think it doesn’t count when you say the word in a song, which I didn’t realize was something people still legitimately thought in 2020.

In a subsequent video, Bekah acknowledged that she’s not perfect either, and that she’s worked hard to “unlearn” the ignorance that she grew up with. She says that this process was “difficult and uncomfortable,” but that it’s disappointing to see others not putting in that work and acknowledging their mistakes.

Then, later in the day, she hopped back on stories, saying that she wishes she removed the “call out” part of her initial stories, and instead focused on the educational aspect. That’s all well and good, but she has no reason to apologize. Hannah f*cked up, and there’s no reason people need to tiptoe around holding her accountable.

In an Instagram story on Sunday night, Mike said that he received DMs calling him out for not addressing the situation sooner, accusing him of “not defending women of color.” While he said he hadn’t seen the video yet, he made his thoughts clear: “she shouldn’t have said the N-word, it’s pretty damn simple.” He then asked people not to come for him for not keeping up with every little thing that happens in Bachelor Nation. Honestly, relatable.

If I’m being honest, Tyler Cameron’s responses to this whole thing have felt a little wishy-washy. In an Instagram story, he said that Rachel Lindsay “hit the nail on the head,” and that “we have a long ways to go on this issue.” That’s certainly true, but then he changed gears to sort of defending Hannah. Uh, what?

He said, “This is not about dragging HB. This is about using your platform for reasons like this. So we can educate those who don’t get it. This is bigger than HB. This is a societal problem.” Like, yes, it is definitely a societal problem, but it’s also an HB problem. No one should be sending Hannah threats or anything, but it’s absolutely justified for people to be hurt and angry, and to call her out for what she did.

In a response to a DM, Tyler also took kind of an odd stance: “In these moments you have the opportunity to burry someone or lift them up. We need to lift HB up from this. She is learning and growing just like every single one of us. Love rids hate. Hate only makes more hate. Let’s learn and lift each other up with love.” Whatever Tyler is smoking, I’d like some. Of course, it’s important to educate and grow and love and all that sh*t, but it’s been one day. People are still mad, which is a completely valid response, because Hannah used a racial slur with centuries of hate-filled baggage attached to it, and nobody should be dismissing those feelings of anger and hurt so quickly. A quick glance through Instagram comments will show that the majority of the people who are rushing to forgive her are not the ones who have truly felt the damage that this word can cause (TL;DR: they’re white). And not only did Hannah use the word, but her initial response was so flippant, you’d think it was no big deal. Of course I hope she grows and learns and takes meaningful actions to do better in the future, but that doesn’t mean we should give her a free pass because “everyone makes mistakes.”

Nick Viall was just trying to do a normal Q&A on Sunday, but naturally a ton of people wanted his thoughts on the Hannah controversy. He kept it simple, saying “There is no excuse. Period. Super sad and disappointing to see.” Honestly, that’s about all I need from someone like Nick. I actually really like that he directed people to Rachel’s Instagram Live, rather than trying to make this about him sharing his own thoughts.

UPDATE: Another day has passed, and thankfully, more people from Bachelor Nation have spoken out about the whole situation with Hannah Brown.

I had no idea what was going on until last night, & didnt get the full story/see the video until this morning.

Watching her get quiet when she approached the N-word in the lyrics tells me she knew she shouldnt have said it. Ive heard more sincere apologies from a box of cereal. https://t.co/g0rNXsOcx0

I love Diggy so much. He keeps it real 100% of the time, and he has no time for any of this nonsense. He made a good observation about how Hannah seemed reluctant to say the word in the first place. Others have also pointed out that she specifically didn’t say the F-word in the same song. Interesting, for sure. But yeah, can’t argue with Diggy’s opinion on her apology.

I didn’t want to have to say anything, and I honestly shouldn’t have to say anything. ⁣⁣⁣ ⁣⁣⁣ ⁣⁣⁣ ⁣⁣ Ya’ll know what is wrong here, I don’t need to break it down. ⁣⁣⁣ ⁣⁣⁣ ⁣ I will say this…this is an opportunity for white people, especially those in bachelor nation, to practice being an ally to black people. It is an opportunity for you to hold other white people accountable when they’re not living or acting in a way that is anti-racist, to educate them and to educate yourselves on how to be an ally. Being an ally is a practice, and I’m going to call on you today to put that into practice. ⁣⁣⁣ ⁣⁣⁣ ⁣ On a daily basis, black people put in an exhausting amount of emotional labor to educate white people on matters of race. When a black person puts in that emotional labor to educate, they then are often met with white fragility and put in even more emotional labor and support to console that white person in an attempt to sooth them so they can actually get to the root of the issue, be heard and seen, and actually educate. ⁣ ⁣ So, let’s not put this on black people to explain to other white people why saying the n word, in any context, is not okay…cause y’all know, and ya’ll need to start having these conversations with each other. ⁣⁣⁣ ⁣ You all know where I stand. Frankly, I’m not surprised. I have had countless interactions with a white person in that situation, and I’m just triggered. I have repeatedly had the word personally used against me throughout my life, in a way to belittle me, make me feel less than, and frankly to de-humanize me to justify treating me like shit. ⁣⁣⁣ ⁣⁣⁣ Words carry weight. Words are powerful. Be intentional and thoughtful with the words you use, even in what you think is a playful settings, because your words matter. ⁣⁣⁣ ⁣⁣⁣ So, #bachelornation, how are you going to show up as an ally?⁣⁣⁣

Taylor Nolan made a post with a caption that called on white people, and especially those in Bachelor Nation, to take this opportunity to be true allies to people of color. She writes that how black people put in “an exhausting amount of emotional labor to educate white people on matters of race,” but that white people often aren’t receptive to what they hear. Particularly in Bachelor Nation, this is an important moment, and it’s telling who has spoken up, and who has remained quiet.

Danielle Maltby, from Nick Viall’s season, put a couple great posts on her Instagram story. She echoes Taylor’s post, saying that “It is not the job of black women to educate white people.” She also addresses all the people who think that singing it in a song is okay, or that it’s okay because black people say it all the time. Those are terrible excuses, and Danielle is having none of it.

I never thought I’d say this, but I’m really impressed by Cassie. Right off the bat, she says that saying the N-word is never okay, and acknowledges that her feelings don’t matter here. She cites the black women in Bachelor Nation who have already spoken on the topic, and says that we can all learn from this. While Tyler Cameron seemed too quick to forgive, Cassie really hit the right note of learning and growing, without acting like nothing bad happened in the first place.

It’s great that more people have spoken out in the last couple days, but there are still so many who have kept quiet. Chris Harrison, care to comment? No? Cool. I guess this shouldn’t be too surprising, but it’s still disappointing.