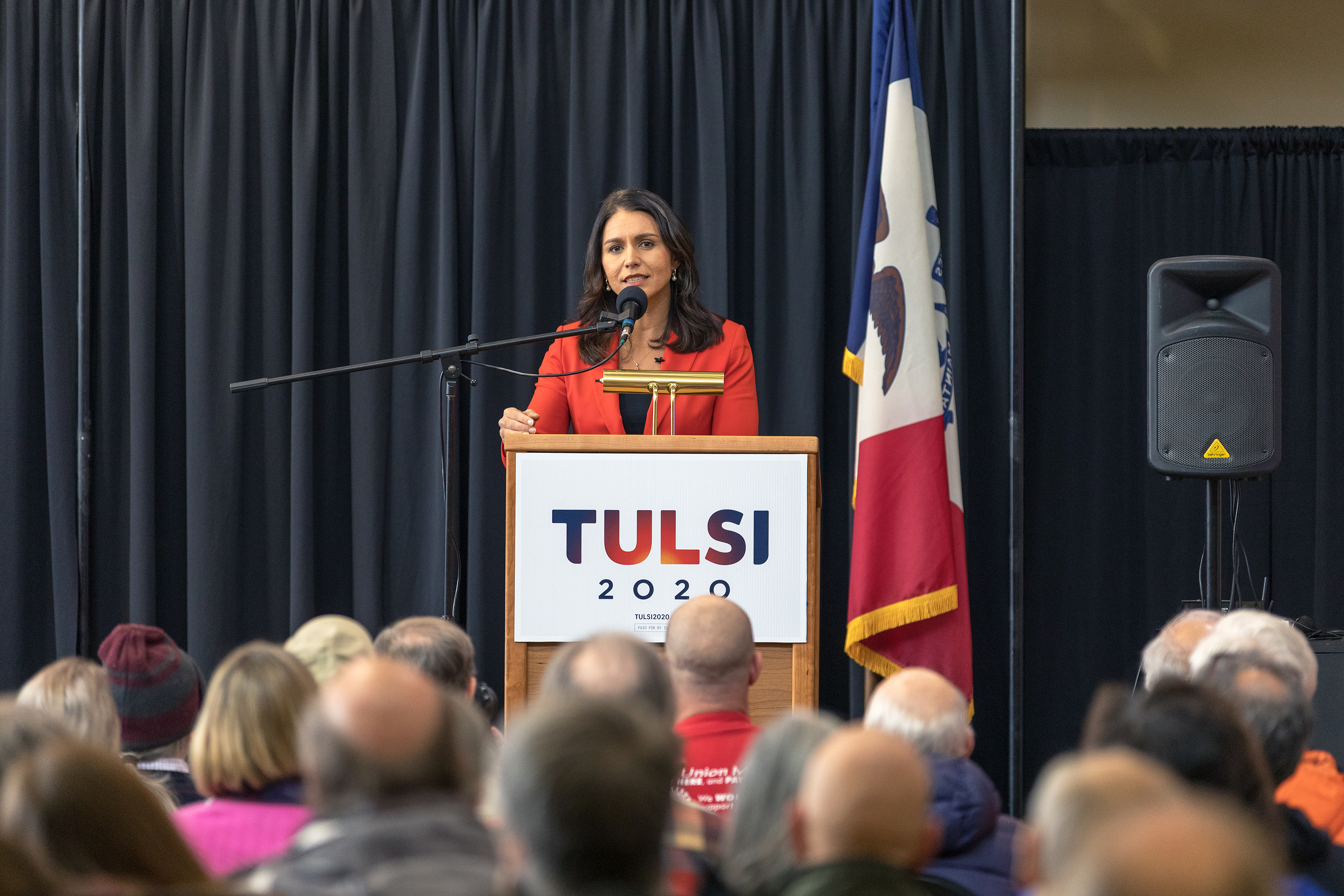 There’s a 50% chance you’ve made out with someone who’s running for President this year. JK, but honestly, maybe not JK because there’s so many people throwing their name in the race. Honestly, imagine making a brunch reservation for this many people? I’m already crying on the phone with the hostess at the thought. While we wait for our full party to arrive, lets get a breakdown of every person you didn’t know you need to know:

I launched a presidential exploratory committee because it is a season for boldness and it is time to focus on the future. Are you ready to walk away from the politics of the past?

Move over Pete Davidson, because there is a new Pete in our lives. Pete Buttigieg (yes, his name has “butt” in it. Let’s all take a moment to acknowledge that and move forward…) is the openly gay mayor of South Bend, Indiana. He’s a casual 38-years-old, making him the youngest candidate in the race, and potentially the youngest president in history depending on how all this shakes out. So basically, not only would he be the first openly gay president, he’d also be the first millennial president aka the first president who understands the importance of having a cohesive Insta Story.

When he was elected, he was the youngest mayor of a city with more than 100,000 residents, and he served as a U.S. Navy Reserve officer rom 2009-2017, so he’s got that sweet, sweet military background. He also took a leave of absence during his time as mayor to serve a seven-month tour of duty in Afghanistan because he’s just an overachiever like that. (Is Mayor Pete a Taurus? Can somebody check?)

Want to be the Ariana to Pete’s campaign? Check out his website here.

We need a growing and prosperous economy that works for everyone. That’s what my campaign is about. pic.twitter.com/d8qNKMxyei

No, not Mulaney — but hey, that could be fun. A democrat, Delaney was the United States Representative for Maryland’s 6th congressional district since 2013. His main mission is to focus on the future and not the past; which means I’m guessing Countess LuAnn is his campaign manager. Whatever happens Before Lu, doesn’t matter. He’s also stated that he’s into bipartisanship, and make the Democratic party a “big tent” party that will bring new voters in. AKA, he’s this chick from Mean Girls:

What we do love about him? He sponsored the Open Our Democracy Act legislation that would make Election Day a federal holiday, so your boss can’t force you to choose between a paycheck and your country.

Into it? You can learn more about his campaign here.

Many ask if Universal Basic Income would cause massive inflation. It’s an understandable concern. But we would not be adding much to the supply of money. The economy is up to $20 trillion up $5 trillion in the last 12 years alone. pic.twitter.com/gb2E7C1dSm

Another day, another entrepreneur running for president. Can someone please tell rich people everywhere that America is not a startup? He’s… the most out there candidates in terms of what they’re running for. I am a huge advocate of Daring to Be Different (its why I only go out to bars in pajama jeans) but it might be too much of a stretch to advocate a universal basic income for everyone in a country where people cry “socialism!” when you lend your friend a dollar. But hey, I’m just saying that *I* think that’s too much of a stretch, and I (as you already know), wear pajama jeans out in public.  The universal basic income he’s proposing is $1,000 a month — which I’m not sure would even cover my Take Out & Taxi habits (please help me budget), but I’m sure would be helpful to someone with financial skills and/or impulse control.

It is great that he continues to make the list of potential candidates even more diverse, being only the second Asian American to run — and the first to run as a Democrat. Uh, also, the lead singer of Weezer may be supporting him?

Thank you @RiversCuomo – you’re a true visionary. Honored to have your support for my campaign. Look forward to seeing you on tour! ????

Into it? Learn more about his campaign here.

An Iraq war veteran who has served as a congresswoman for Hawaii, Tulsi Gabbard seems very qualified for the job. She wants to make the minimum wage $15, which is great — but she’ll have to overcome her conservative past; mainly being against LGBTQ+ rights and some international issues. While these mainly were issues from over a decade ago, so was that one party where you wore a skirt over jeans — and thanks to the Internet, both memories will live on forever. Her campaign has already attracted support from some of the uh…more controversial wings of American politics like former KKK Grand Wizard (yes, that is what they call their leadership) David Duke and Russian bot accounts that were set up to celebrate her announcement.

Umm…yikes? If elected, Gabbard would be the first Hindi and first Pacific Islander to be President — along with being the first woman, which seems pretty antithetical to what the KKK believes in but hey, what do I know? I’ve never been a member.

Pete Buttigieg: I’m going to have the weirdest name as a candidate.

John Hickenlooper’s career in politics actually started after he got fired from his job in oil and decided to open up a brewpub, which we’re kind of obsessed with. He feels that this experience helped him become an expert at “uniting” people together — kind of like how a bottle of Cabernet can unite people together on Mondays before The Bachelor starts. From there, he became the Mayor of Denver and ultimately the Governor of Colorado (blaze it, Hickenlooper).

He actually seems like a decent guy — supporting gun control, believing in the fact that the Earth is melting, and working to reduce homelessness. His major issue will probably be differentiating his point of view from all the other Democrats running against him with similar platforms and more of a name recognition.

Want to learn more about his campaign? Check out his website.

VIDEO: This is our moment, our climate, our mission — together, we can defeat climate change. That’s why I’m running for president. Join #OurClimateMoment today https://t.co/zg8ILGyk0Z pic.twitter.com/pUZVxyzfc5

Jay Inslee, Governor of Washington, is running with one thing in mind: attempting to reverse climate change and the damage we’ve all done to our planet. I hate to say that as a positive, and not as a “no sh*t,” but turns out some (or most) of our politicians think climate change is as real as Taylor Swift’s new secret single she’s releasing soon. (THEY’RE BOTH REAL AND THEY’RE BOTH HAPPENING.) Except one will kill us all! And it’s not Taylor this time.

Listen, I’m typing this while sipping out of a metal straw and eating vegan cheese for lunch. I want everyone to care about the environment, but I feel Jay Inslee’s issue will be just having this hill (or, melting snow cap) to die on. Ellie Goulding also does a lot to raise awareness for global warming, but you don’t see her running for office — you just see her running all the damn time. We’ll see, maybe he’ll add more issues to his rallying cries; but at the very least, I hope he gets every single candidate in a debate to admit that the Earth is actively melting and we’re all dying. Do that for us, Jay!

Here’s his website if you want to learn more.

Sure, none of these guys are current frontrunners, but who knows? One of these candidates could have a sudden surge of momentum and leap to the forefront of national conversation to make a splash (see: Barack Obama in 2008). But until then, it kinda seems like they’re all just other Best Original Song nominees in a sea of Shallow’s.