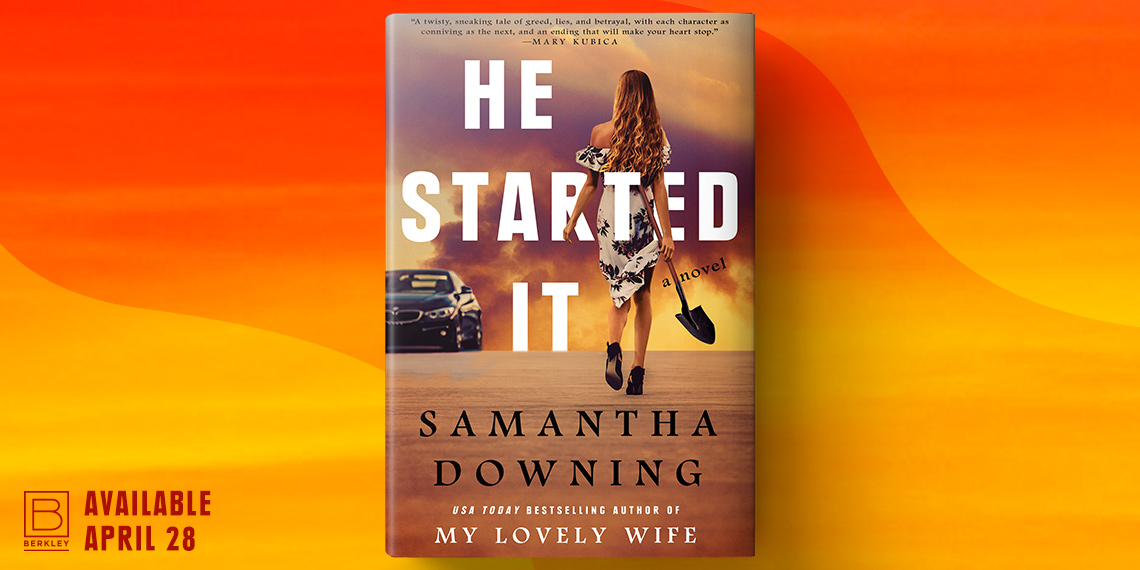 Exclusive: Look At The Gripping First Chapter Of ‘He Started It’ By Samantha Downing

The author of 2019’s My Lovely Wife, Samantha Downing, is back with her second book, He Started It. Her first thriller was hailed as “a dark and irresistible debut” by PEOPLE and “Gone Girl, except better” by yours truly. He Started It follows a family of grifters on the road trip of a lifetime (and I mean that quite literally), out April 28 by Berkley, an imprint of Penguin Publishing Group, but you can start reading He Started It right now, exclusively on Betches.

Three siblings. Their spouses. Dear old Grandad’s dead body in the trunk. Such begins He Started It, a fast-paced novel about a dysfunctional family on a road trip—only things are a lot darker and more twisted than your average family vacation. That’s because instead of a feel-good getaway, this family of three grifters, liars, and cheats (plus their spouses) are on a quest to scatter their grandfather’s ashes so they can collect his inheritance. But exactly like on your family road trips, nobody wants to share.

Samantha Downing’s debut novel, My Lovely Wife, earned her a nomination for an Edgar Award—a big f*cking deal in the thriller world. Her follow-up doesn’t come out until April 28, but it’s already generating buzz, and you can read an exclusive look at the first chapter below.

You want a heroine. Someone to root for, to identify with. She can’t be perfect, though, because that’ll just make you feel bad about yourself. A flawed heroine, then. Someone who may break the rules to protect her family but doesn’t kill anyone unless it’s self-defense. Not murder, though, at least not the cold-blooded kind. That’s the first deal breaker.

The second is cheating. Men can get away with that and still be the hero, but a cheating wife is unforgivable.

Which means I can’t be your heroine.

I still have a story to tell.

It begins in a car. Rather, an SUV. We sit according to our rank, the oldest in the driver’s seat. That’s Eddie. His wife sits next to him, but I’ll get to her.

The middle seat is for the middle child, and that’s me. Beth. Not Elizabeth, just Beth. I’m two years younger than Eddie and he never lets me forget it. I’m okay to look at, though not as young or thin as I used to be. My husband sits next to me. Again, later for that, because our spouses weren’t supposed to be here.

One seat left, way in the back, and that’s Portia. The surprise baby. She’s six years younger than me and sometimes it feels like a hundred. With no spouse or significant other, she has the whole seat to herself.

In the very back, our luggage. Stacked side by side in a neat single row because that’s the only way it fits. I told Eddie that the first time. Our handbags and computers bags go on top of the roller bags. You don’t have to be a flight attendant to figure that out.

Under the bags, there’s the trunk compartment. One side has the spare tire. In the other, a locked wooden box with brass fittings. This special little box in this special little place, all by itself with nothing else around, is to hold our grandfather. He’s been cremated.

We aren’t talking about him. We aren’t really talking at all. The sun beams through the windows, landing on my leg and making it burn. The A/C dries out my eyes. Eddie plays music that is wordless and jazzy.

I look back at Portia. Her eyes are closed and she has headphones on, probably listening to music that is neither wordless nor jazzy. Her black hair is long and has fallen over one eye. It’s dyed. We all have pale skin, and we were all born with blond hair and either blue or green eyes. My hair is even lighter now because I highlight it. Eddie’s is darker because he doesn’t. Portia’s hair has been black for a while now. It matches her nails. She’s not goth, though. Not anymore.

The music change is abrupt. I didn’t even see Krista move. That’s Eddie’s wife. Krista, the one with olive skin, dark hair, and brown eyes with gold flecks. Krista, the one he married four months after meeting her. She used to be the receptionist at his office.

I continue to stare out the window. Atlanta is long gone. We aren’t even in Georgia. This is northern Alabama, past Birmingham, where the population is sparse and skeptical. If we were trying to rush, we’d be further along by now. Rushing isn’t part of the equation.

That’s Portia, her voice groggy from her nap. She’s sitting up, headphones off, wide-eyed like a child.

She’s been milking that baby-of-the-family shit for a long time.

“You want to stop?” Eddie says, turning down the music.

Eddie looks at me in the rearview mirror, like I get a say in the matter. I’m already outnumbered.

We stop at a place called the Roundabout, which looks just as you imagine. Rustic in a fake way, with the lasso and goat on the sign, but naturally rundown with age. Authentic but not—like most of us.

We all climb out and Portia is first to the door; Krista isn’t far behind. Eddie is the one who takes the most time. He stands outside the car, staring at the back. Hesitating.

It’s our grandfather. This is our first stop of the trip, meaning it’s the first time we have to leave him alone.

He doesn’t look at me, doesn’t take his eyes off the back of the car because Grandpa’s ashes are everything to us. Not for emotional reasons.

“You want to stay out here? I can bring you a doggie bag,” I say. Sarcasm drips.

Eddie turns to me, his eyes wide. Oh, the shock. Like if I had just told him I was leaving my longtime partner for someone I met two months ago.

Oh wait, he did that. Eddie left his live-in girlfriend for the receptionist.

Inside the Roundabout, everyone is sitting in a semicircle booth. It’s twice as big as it needs to be. The seats are wine-colored pleather. Krista and Portia have scooted all the way to the center of the booth, leaving Felix on one side. That’s my husband, Felix, the pale one with the strong jaw and white-blond hair with matching eyebrows and lashes. In a certain light, he disappears.

“We probably should get something settled,” Eddie says. He looks like our father. “We’re going to be driving for a while. A lot of gas, food, and motel rooms. I propose we take turns covering the expenses. More than anything else, let’s not argue about it. The last thing we need to do is fight over a gas bill.”

Before I can say a word, my husband does.

“Makes sense,” Felix says. “Beth and I will pay our fair share.”

Only a spouse can betray you like that. Or a sibling.

That leaves Portia. Given that she’s doesn’t really have a career, the deal isn’t fair.

She yawns. Nods. In Portia-speak, she’s agreeing for now but reserves the right to disagree later.

He takes the check up to the register, because that’s the kind of place this is. Felix goes to the restroom and Portia steps out front to make a call. That leaves Krista and me, finishing those last sips of lukewarm coffee.

“I know this must be terrible for all of you,” she says, placing her hand on mine. “But I hope we can have some good times, too. I’m sure your grandfather would’ve wanted that.”

It’s a nice enough thing for Krista to say, if a little generic. Given the circumstances, I expect nothing less and nothing more.

Still. If everything falls apart and we all start killing each other, she goes first.

You think I said that for shock value. I didn’t.

No, I’m not a psychopath. That’s always a convenient excuse, though. Someone who has no empathy and has to fake human emotions. Why do they do bad things? Shrug. Who knows? That’s a psychopath for you. Or is it the word sociopath? You know what I’m saying.

This isn’t that kind of story. This is about family. I love my siblings, all of them, I really do. I also hate them. That’s how it goes—love, hate, love, hate, back and forth like a seesaw.

That’s the thing about family. Despite what they say, it’s not a single unit with a single goal. What they never tell us is that, more often than not, every member of the family has their own agenda. I know I do.