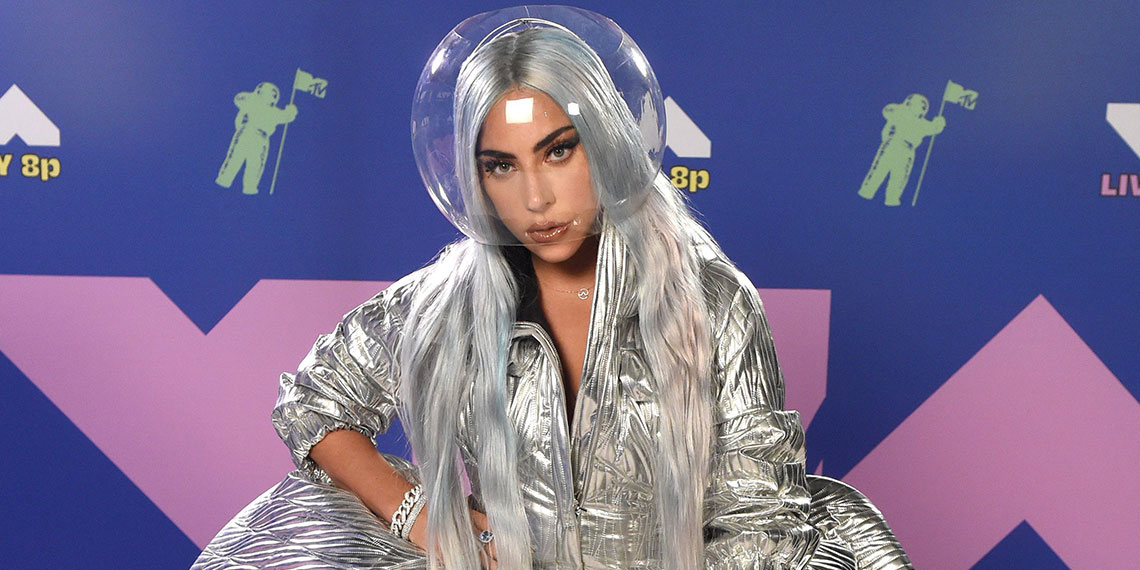 Amidst all the canceled events of 2020, somehow the VMAs managed to survive, and they were broadcast “live” last night on MTV. (I say “live” because many parts were actually filmed in advance.) But really, the VMAs of all things was the show that went on? Not even, like, the Met Gala? Don’t get me wrong, the VMAs are a fun time, but I can barely be bothered to muster up enthusiasm for my job in these times, let alone an award that comes in the form of an astronaut and is determined by people who spend their free time learning TikTok dances. This year’s ceremony was, by many accounts, a snooze-fest, but the socially distanced red carpet brought about some meme-able looks to discuss. Typically, it’s hard to end up on our VMAs “worst dressed” list, because the vibe of the red carpet is really more about who can look more out-there than who can look traditionally “good”. That being said, some celebrities still failed to impress—which is actually kind of an accomplishment considering they’ve had nothing to do for months than figure out an outfit for this event. (Things my friends will say to me at their 2022 wedding.) Some celebs looked amazing though, and we have to give credit where it’s due.

As far as the actual show, while it was no “Britney and Madonna making out”, there were still some noteworthy moments. Keke Palmer, the host, dedicated the show to Chadwick Boseman, whose death was confirmed on Friday night. MTV also put together a touching tribute to the late Black Panther actor that will make you cry. The Weeknd opened the show with a performance from over 1,000 feet in the air, and used his speech for Best R&B Video to call for justice for Jacob Blake and Breonna Taylor. Similarly, DaBaby’s medley alluded to police brutality and the COVID-19 pandemic.

Miley recreated her iconic “Wrecking Ball” video during her performance of “Midnight Sky” when she swung from a disco ball (not naked this time, though). Lady Gaga came through with iconic outfits, as is to be expected, and wore a face mask all throughout her performance, effectively squashing any of the popular Karen excuses for not wearing a mask. Overall, while there were some interesting performances, if you didn’t watch, you really didn’t miss anything.

So without further ado, here’s our rundown of the very limited socially distanced red carpet.

This one falls under the category of “looks amazing but didn’t go all-out”. Madison looks great (even if this look feels like Kylie Jenner cosplay), but I’m just a little bored. This is exactly what I imagine every Gen-Z girl would be wearing to a frat party right now, or like, what NYU students would wear to 13th Step/Penny Farthing. Do I now want to buy this dress off Nasty Gal (where I presume it came from)? Kind of, but that’s not the point.

Granted, I may not know a whole lot about fashion, but I do know that peplum tops and bubble skirts went out of style at around the same time I stopped flat-ironing my side bangs. So why this dress has both elements in one, and saw the light of day in 2020, is perplexing. All I can really say is that this prom gown just looks like a period. I don’t know why, but I just know that it’s true.

They don’t even go here!! I love that the Black Eyed Peas were at the VMAs, and I love that they dressed like three bros getting ready for any old Saturday night out at the bar. You’d think they would have gone a little harder, considering they have had like, no public appearances since 2013. This was your moment to make a splash, and ya blew it.

Again, file this one under: I love this dress, but not for the VMAs. The dress is cute but feels like something I could have picked up from an Urban Outfitters, and the accessories are giving me “grandma’s costume jewelry” vibes. I’ve also got to take this time to discuss how seemingly random the guest list is. Like, on the one hand you have Lady Gaga and Miley Cyrus. And then on the other hand, we have… the Black Eyed Peas minus the one member of the band who made them relevant in the first place, and Gypsy Rose Blanchard? It’s like instead of using seat fillers, they just used random celebrities.

I’m actually dying at Bella stealing Jenna Rink’s updo. Now, I don’t hate this outfit—I actually like it and would probably wear it. However, see-through and black seems to be Bella Hadid’s red carpet M.O. Her 2017 Met Gala look? See-through and black. Her 2019 Met Gala look? not see-through per se, but lots of cut-outs and black. I guess there is something to be said for consistency, even though this whole look is what you’d get if you typed “Goth Dollz” into one of those glittery gif generators from the early 2000s.

And now for the looks we didn’t hate…

Nothing but respect for my Statue of Liberty. That’s it, that’s the description.

Miley looks incredible, even though I’m pretty sure I own this bathing suit cover-up. This is kind of giving me knock-off Rihanna at the Met Gala vibes, but I feel like that’s what we deserve in 2020.

Unsurprisingly, Lady Gaga had the best looks of the night, starting with her red carpet ensemble, which felt like “the moon man, but make it avant-garde”. It worked out for her, considering she took home four awards, the most wins for the night. This outfit is basically proof that manifesting works.