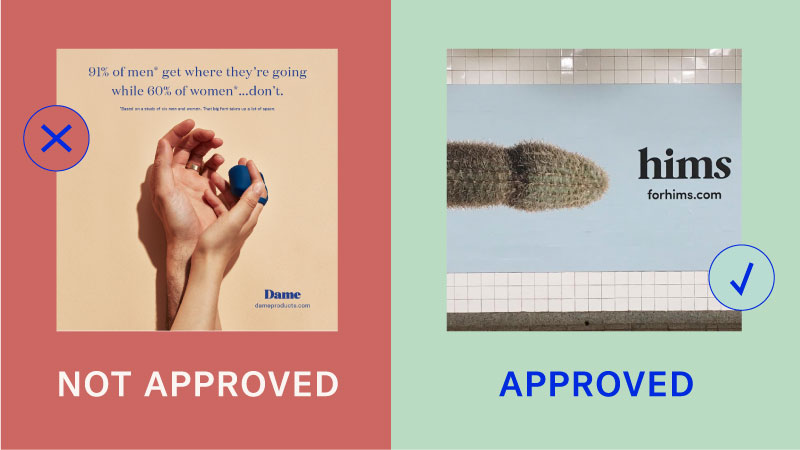 If you’ve ever been to New York, you can attest to the fact that you can see just about anything on the subway. From mini-concerts to giant cockroaches, Sheryl Crow was probably on the subway when she wrote “every day is a winding road.” I mean, I consider it a blessed day when I get on a train car sans the smell of urine. It’s the little things!

While a lot of the smells and trash come as a surprise, unusual ads are par-the-course in the subway. They’re how you find out about new CBS shows you’ll never watch and are reminded that they’re still making new flavors of vodka! This is why it’s shocking and disappointing that the MTA (Metropolitan Transportation Authority) refuses to accept ads from a sex toy company because they’re “too sexual.” This is just one of the many reasons why I hate the subway and always check how much a Lyft will cost (well that and also because Carrie Bradshaw ruined my life).

Dame is a business run by women, for women. They create gorgeous products to help make sex fun and more enjoyable for women and people with vulvas, with the goal of closing the “pleasure gap”.  Literally, their research shows that 91 percent of cis-men “usually” orgasm during sex, whereas their female counterparts are at a drastically low 39 percent. I’m very bad at math (and not the best at sex — I’m very lazy) but even I know that number is f*cked and should be much more even. But unfortunately, the MTA doesn’t seem to agree — which is why Dame is launching their campaign to #DerailSexism.

You might be thinking — sex toys seem risky, why did they think they’d get approval? For starters, ads promoting erectile dysfunction medication abound underground. And after Dame’s friends over at Unbound, another sex and pleasure-oriented company, had their ads rejected by the MTA in early 2018, the backlash prompted the MTA to consider opening ad space up to companies like Dame and Unbound. And it seemed like they just might! In October 2018 — when Dame submitted to get ads approved on the subway, they actually got approved. But then, like the 61 percent of guys who didn’t give a woman a damn orgasm, the MTA ghosted them.

Their ghosts came back though. But the ads were rejected in light of the MTA’s updated guidelines preventing sexually oriented businesses from advertising. Hmm, in the words of Marcia Brady — sure Jan.

The company spent over $150,000 on the ad campaign with the assurance they’d likely be accepted.

Dame let us peek at the letter they received from the MTA’s chief development officer stating their rationale for the decision:

“After a careful review, the MTA determined that the proposed ads promote a sexually oriented business, which has long been prohibited by the MTA’s advertising standards,” the executive wrote, adding that the MTA believes the standards are “applied evenly to all genders.”

That’s weird because I could have sworn…

So, we’re suing the MTA. ⚖️ ??⠀ •⠀ @mtanyctransit applies their vague advertising guidelines unevenly, which perpetuates a harmful double standard. ⠀ •⠀ Since the MTA won’t take our ads, we need your help. If you believe that all sexualities and genders deserve equal access to public forums, please consider taking a screenshot of our ads and sharing our story with the hashtag #DerailSexism, and mention @dameproducts and @mtanyctransit. Thank you for your support in making the world a happier place, one vulva at a time.

What’s more, it’s not hard to find a New Yorker who has seen an actual penis on the subway. Delightful and unassuming millennial-matte pleasure enhancers? F*cking eye candy in comparison. To say nothing of the fact that Dame’s sex toys bear no resemblance genitalia or actual sex organs. And while I delight in watching toddlers point inquiringly to the cactus penis as embarrassed parents try to explain its likeness without having the birds and the bees convo on a stalled express train, the double standard is abundantly clear.

Dame filed a lawsuit against the MTA yesterday. The suit alleges free speech violations and inconsistent application of the MTA’s policy of not featuring “sexually oriented businesses” given you can’t get on the M train without seeing a big prickly cactus dick.

Dame’s CEO and co-founder Alexandra Fine explained their rationale for the lawsuit. “To us, it’s evident that the MTA is prioritizing ad space for tools that make sex better for men/people with penises – but ignoring all of the many benefits of tools for women/people with vulvas (they’re a tool for low libido, abuse survivors, and cancer patients, to name just a few)!” she told Betches.

It’s also important to note that every person Dame dealt with at MTA was a man — great! No wonder Thinx, the menstrual underwear brand, also ran into similar issues of sexism when dealing with getting their ads on the MTA.

By banning the ads, the MTA is “discounting the importance of advocating for enjoyable, pleasurable sex – which is something that, unless we learn to discuss openly, will never be common knowledge,” Fine told us. “We feel strongly that we need to learn how to have healthy conversations about sex or we risk unhealthy practices,” and Dame believes public acceptance and celebration of the joys of sexuality are a critical part of that.

“The MTA platform favors male-run organizations that tackle sexual health with a male-centered lens,” Fine said in an interview with Broadly. All this basically makes the MTA just like our country’s government. No wonder depending on the subway makes you feel the same way you feel after trying to depend on the United States: you’re tired, you’re angry, and all you want to do is move to Paris.

Learn more about the company and how to support their #DerailSexism campaign here.