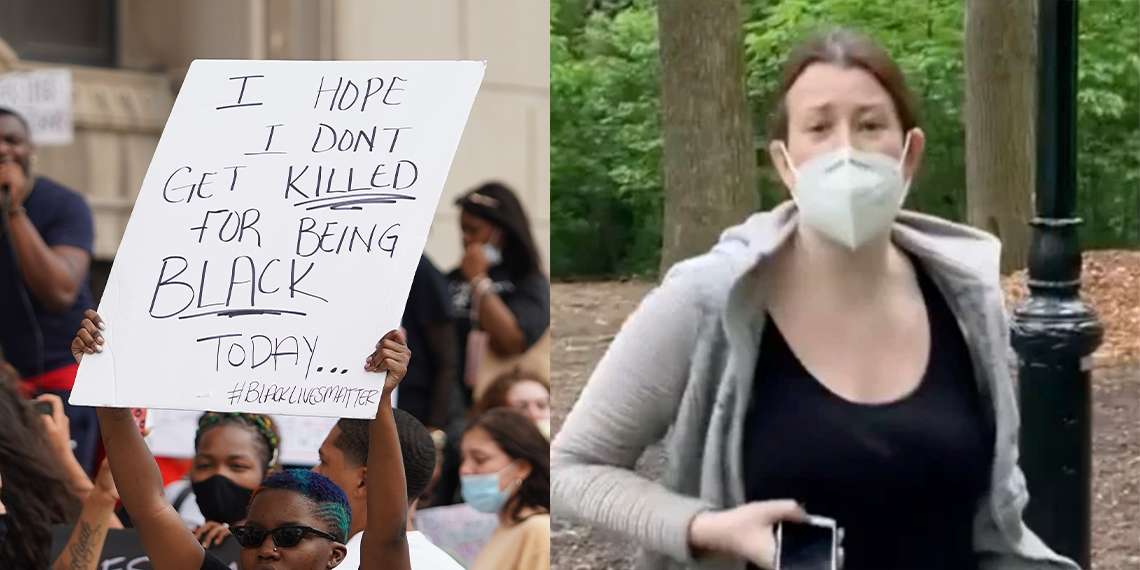 In the ongoing hellscape known as reality, it was somehow a perfect encapsulation of 2020 to watch a random entitled white woman upgrade to her Ultimate Karen form by confronting, then attacking a Black man’s polite request with the promise of state-enforced violence. But while we were on the way to another boring episode of blameless white victimhood, something curious happened: consequences.

Let’s be honest: whenever the words “consequences” and “white” are part of the equation in this country, it’s usually a bad result for BIPOC (black, indigenous, and people of color). For pretty much ever, the costs of racism have been paid out by the victims. At any white whim, our lives could be disrupted, incarcerated or ended — without defense. Our homes, our jobs, our dreams: all of it could disappear in an instant, if it offended or obstructed the interests of white people.

In previous decades, this was the price paid by Emmett Till and the Exonerated Five. And considering the long and recent list of names from Trayvon Martin and Renisha McBride to Atatiana Jefferson and George Floyd, not enough of that reality has changed.

It’s in that reality — the one where white discomfort is paid for in Black suffering — that Amy Cooper went viral. In the now ubiquitous video, Cooper escalated a simple dispute about basic decency (following the rules of Central Park) into a dramatic and theatrical performance of fragile white womanhood. Confronted about the lack of leash on her dog by avid birder and Black man, Christian Cooper (no relation), Amy took it into her head that the only appropriate response to this entirely reasonable demand was to act as if he had threatened to assault her and then call the police for her fake danger.

It was a moment of selfish, manipulative cruelty. It was an act of supreme and reflexive entitlement. It was a complete dick move. There was no redeeming value in her actions; nothing defensible or sympathetic. And in a rare move, reality agreed.

In about the time it takes to saturate Twitter feeds on Memorial Day, Amy Cooper had lost her job, her dog, and any shred of dignity. Former dog-walkers identified her; her employer disavowed her; her neighborhood rebuked her. As much as is possible in our divided age, we had consensus about the danger and the damage of Cooper’s actions, and moved to punish her for them. And in doing so, there was a validation of the perspectives and voices of Black people about the reality of our world and the nature of the pressures and threats we face.

In the isolation of pandemic, we have had to face the calculated disregard for Black lives without the distraction of daily life to buffer the pain. Ahmaud Arbery; Breonna Taylor; the same-day murder of George Floyd: these stories illuminated the endangerment that Amy Cooper was happy to invoke in contrast to the trifling frustration of having her entitlement called out. And so, when her punishment came through, there wasn’t a lot of equivocation; there wasn’t a lot of rationalization; there wasn’t a lot of the same terrible excuses we’ve heard a thousand times. Finally, the same racist energy that upends lives and steals futures came right back on the woman who sent it out into the world.

And she did send it. As pointed out across the internet, Amy Cooper knew what history she was invoking when she called 911 and screamed for a cop to come immediately to deal with the African-American man “threatening” her and her dog. She wasn’t thoughtlessly reacting or overcome by fear; she knew the costs of racism — fear, intimidation, exclusion, exploitation and death — and was trying to force Christian Cooper to pay them. She just didn’t expect that it could apply to her.

In the big picture, it’s not wild for her to believe that either. In the same way that BIPOC have largely borne the weight of racism, white people have largely escaped consequences. Depending on the white person, they’ve even flourished. Donald Trump is President of the United States after open and visible support of white supremacists, including hiring them as advisors. In the middle of a pandemic, there’s still no coordinated federal response to the reality that Black and brown citizens are losing their lives at an alarming rate, nor that we are the populations most endangered by sloppy and irresponsible reopening plans.

Culturally, Lana del Rey thinks she can throw shade at Beyoncé, while Colin Kaepernick entered yet another NFL season without a contract, as a guy with white supremacist tattoos celebrated getting drafted. If a well-off white lady in Central Park thinks that doing some racism is going to turn out ok for her, she’s usually right.

In another time, on another day, Amy Cooper could have done the same thing, and Christian Cooper would have had to survive the fallout. That’s how things usually go. That’s how things are for millions of Black people every day. Any given interracial interaction could cost us our whole lives, literally literally.

Before it cost her a living, a pet, and a sense of peace, Amy Cooper was fine with using that existential terror for her own ends. In the viral video, she didn’t react with shame and self-reflection when caught breaking the rules; she got more aggressive and reactionary for being rightly challenged. And she was willing to make Christian Cooper pay for that discomfort with his life.

Fortunately, he didn’t have to. Fortunately, her vindictive desire to ruin his life rebounded to ruin her own. Amy Cooper deserves to bear the costs that she tried to force others to pay, and we deserve to live in a world that makes her. Maybe this is enough to make her reconsider the impulses that led her to think that any of that was ok.

But more importantly, maybe this is enough to make society itself reconsider who should suffer for racism. Because as much as Amy Cooper probably hates her life right now, at least she still has one.

Knows too much, thinks even more. Has infinite space in her heart for tea and breakfast for dinner. Really from New York, so always ready to cut a bitch.