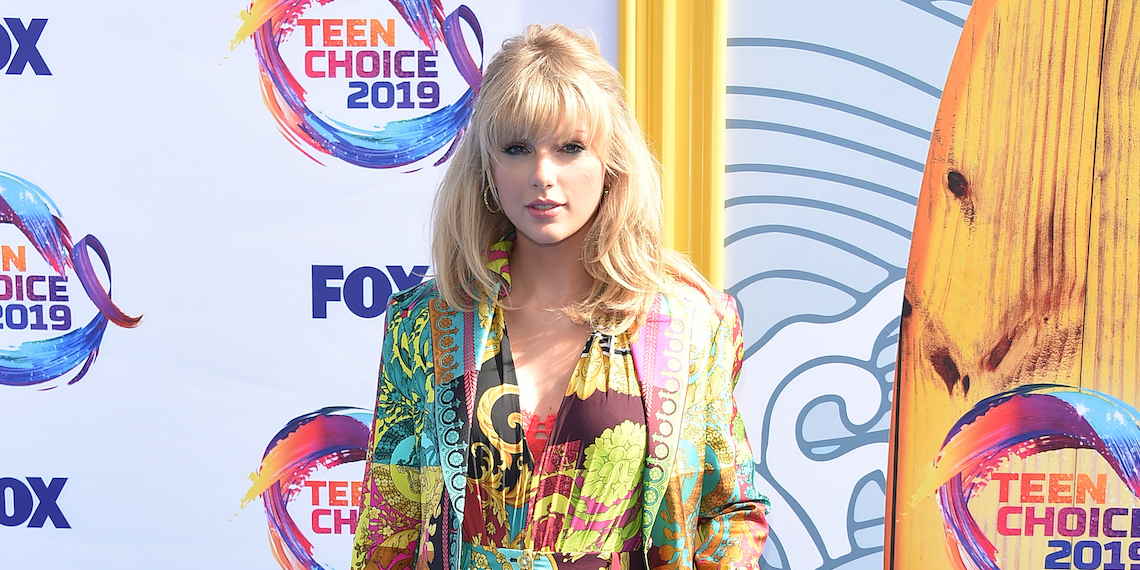 Taylor Swift’s new album Lover is finally here, and I guess I’m excited? If you’ve read my articles about Taylor in the past, you know that we’ve gone on quite a ride. It’s been a rollercoaster, and I haven’t always been nice to Taylor. And you guys f*cking dragged me in the comments. Life is a journey, so I won’t apologize for how I felt in the past, but I will give Taylor the benefit of the doubt. I sat down to listen to her brand new album with a completely open mind, and here are my first thoughts about each song. If you disagree with me, feel free to let me know in the comments or on Instagram (@dylanhafer if you wanna slide into the DM), but remember that this is just music, and Taylor Swift will still be very rich and successful, no matter what I say about her.

I Forgot That You Existed

In the first 30 seconds of the album, Taylor Swift has already made a Drake reference. What planet am I living on? If you had any illusions that Taylor has moved on from being petty toward people who have done her wrong, the album opener “I Forgot That You Existed” should clear that right up. It’s catchy, but I was really hoping that we had left behind the lyrics like “Got out some popcorn / As soon as my rep started going down.” Taylor, this is 2019! No one cares about your ~rep~ anymore! You’re still selling out stadiums, no one feels bad for you.

Is it a coincidence that this song has the same name as a Kanye West album from 2012? Perhaps, but I feel like Taylor Swift isn’t really a coincidence kind of person. This song is catchy AF, and I probably would’ve preferred this as the lead-off track, but oh well.

Now we get to the first one of the singles. I think “Lover” is a solid song, though I don’t really care enough to dissect the lyrics. I stand by the fact that this sounds like a Taylor Swift-ified version of “Welcome To The Black Parade” by My Chemical Romance, but maybe that’s the 2000s kid in me talking.

Three songs in, I feel like we’ve gotten three very different vibes, so I’m curious to see where the album as a whole falls.

Okay, this sounds like a Carly Rae Jepsen song. If you haven’t thought about Carly Rae Jepsen since 2011, go check her out, because she does this but better. In this song, Taylor makes a great point that she gets roasted for the same behavior that powerful men are celebrated for. This isn’t a new concept, but it’s definitely something that affects Taylor.

With the bridge where Taylor talk-sing-raps about flashing her dollars, I’m starting to feel like there’s a little too much wannabe-bad-girl angst lingering from the Reputation era. I expected Lover to feel like more of a fresh start, but two of the first four songs are about haters. I miss 2011.

I loved this song when Taylor released it a few weeks ago, and it’s still going strong for me. I love the driving bass paired with the dreamy synths, and I think this kind of song is what Taylor does best. It doesn’t feel like she’s trying too hard—it’s just a simple, good song.

I Think He Knows

Here I am just plugging on through, and then I get to the lyric “He’s got that boyish look that I like in a man.” Uh, what? Yeah, I guess Joe Alwyn looks kinda young, but this feels like the weirdest possible thing to say about your taste in men. Also, is it true? Taylor dated Jake Gyllenhaal, Calvin Harris and John Mayer, three of the least boyish people I can imagine. I’m going to stop thinking about this before I start to spiral, but I’m still confused.

Aside from raising an eyebrow at that lyric, I actually love this song. The chorus is definitely going to be stuck in my head, and this feels like the best of 1989. I’m into it.

I have no idea what this title is, but it’s gotten my attention.

Wait I love this. It kind of sounds like Lorde or Lana Del Rey, which is a good thing. I’ve always felt like a darker indie-pop vibe is a much better fit for Taylor than anything resembling hip hop, so this feels like a step in the right direction. There’s a great nostalgia thing going on here, and the “Go! Fight! Win!” chant seriously makes me feel like I’m at a high school football game. This is my favorite song so far.

And now for a total 180, we immediately move to a song that sounds like a Meghan Trainor album cut. Like…why is she doing this to us? I’m eight songs in now, and there have barely been two songs that feel like they actually go together. I suspected this might be an issue from the time Taylor released “ME!”, but it’s worse than I had hoped. I’m not saying the album is bad, but it doesn’t feel cohesive, at least for the first half.

Taylor brings it back down to a floaty, cool girl mood, and I’m really starting to get whiplash. If this song was right after “Miss Tropicana & The Prom King,” or whatever it’s called, it would’ve transitioned perfectly, but there’s a clunky Meghan Trainor B-side crammed in the middle. I swear my Spotify isn’t on shuffle!

I really like this one though. In general, I’m really liking about half the songs, and the other ones feel unnecessary. Crazy thought here, but maybe this album didn’t need to be 18 tracks long?

Death By A Thousand Cuts

This one is a little cute for my taste, but I’m not mad about it. But the guitar/piano line with conga drums in the background comes out of literally nowhere on this album that has been 100% synths up until now. I really don’t want to beat a dead horse, but I would love just like, one shred of continuity.

This song starts with a clip of Idris Elba talking, so it’s an automatic 10/10, we’re done here. “London Boy” is obviously a love note to Joe Alwyn, and it is nice to hear Taylor actually sing about a positive relationship. Maybe this one is a little cheesy, but I’ll allow it. Even though you all love to say I hate Taylor Swift, I want nothing but the best for her. And maybe an album that flows a little better, sue me.

High school me is literally dying of excitement that there’s finally a Taylor Swift/Dixie Chicks collab. I’m not sure why this took so f*cking long, but here we are, and honestly? It’s perfect. Taylor has never had a lot of guests on her songs, but they really knocked it out of the park. Does it go with the rest of the album? Hell no! Do I care? Absolutely not. Taylor, please go back to country and make an entire album that sounds like this. It’s all I need.

Where did this come from?? And why did it take us 45 minutes to get here?? This production sounds like Disclosure-meets-Phil Collins, and it’s amazing. Wait, can Taylor Swift and Disclosure PLEASE do a song together? This song reminds me of “Don’t Blame Me,” but better in every single way. This might be a top ten all-time Taylor Swift song for me, I’m calling it now.

You Need To Calm Down

I don’t have much new to say here, and I still like this song a lot. For whatever reason (probably “Old Town Road”) it didn’t end up being a massive hit, but it was still a really strong single. Way better than “ME!”, which we’ll get to in a minute.

This feels like a classic pop-era Taylor Swift song, which means it’s serviceable, if not special. This probably could have been on 1989 or Reputation, but it works just as well here. 15 songs in here, my attention span is starting to wane, but we’re getting close to the end.

Can we just like, not? I will really never understand the point of this song, and the fact that it’s shoved at the end of the album makes me think that Taylor Swift might not even like it that much either. The only saving grace here is that they took out the “Hey kids—spelling is FUN” part from the album version, but they should’ve just ditched the whole song. I feel like I need a drink right now, and it’s not yet 10am. Taylor, you do scary things to me.

It’s Nice To Have A Friend

I’m not sure whether I like this song or not yet, but it really feels like something different for Taylor. And not in the way I was talking about before, where every song sounded different. With the minimal production and syncopation of the rhythm, it actually sounds more experimental than what Taylor usually goes for.

Well friends, we made it. “Daylight” feels like textbook Taylor Swift, and it’s a perfect way to finish off the album. Even though this song sounds moody, it’s an optimistic finish to an album that feels strangely positive for Taylor Swift. She seems like she’s in a happy place in her relationship and her life as a whole, which is great. The song finishes out with a voiceover of Taylor talking about the things she loves, and I’m genuinely happy for her.

Overall, I think Lover is a pretty strong collection of songs, but there’s no unifying factor that makes it feel like a cohesive album. If she had cut out a few songs, it probably would’ve gelled a little better, but I’m not going to pretend to be some pop music magician. The album is full of things that Taylor Swift fans will love, and there are even a few songs that I’ll probably have on repeat this weekend. It’s never been in doubt that Taylor Swift can write a great song, and Lover is no different. It’s a massive improvement from the petty bullsh*t that made up too much of Reputation, which is probably a sign of growth.

I wouldn’t really classify myself as a Taylor Swift hater (blame my editor for the headline), but I’m never going to blindly love everything she does. I don’t have any need to tear her down, but any artist who’s won two Grammys for Album of the Year can handle a little criticism. Is this so wrong? Now, if you’ll excuse me, I’m gonna go listen to “False God” on repeat. That sh*t slaps.