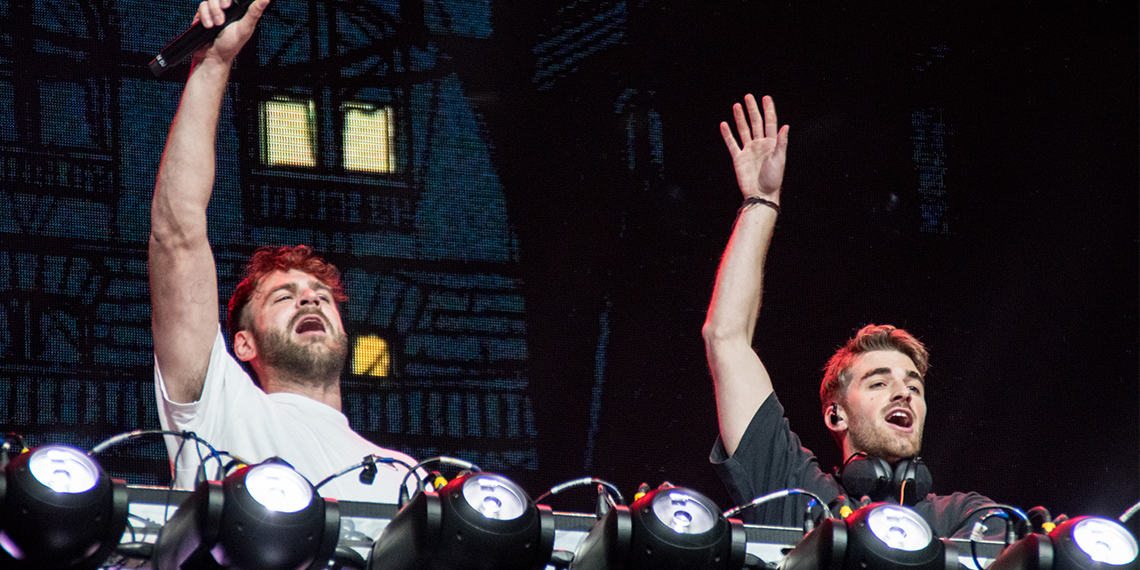 A Chainsmokers Concert In The Hamptons Was A Total Clusterf*ck

As we approach the five-month mark on social distancing and quarantine regulations, it’s fair to say that people are getting restless. While many people understand that things can’t really go back to normal right now, others are getting more and more creative about how we can safely get out and do things in the age of COVID. This has led to a renaissance for drive-in events, which mostly just made me think of Grease prior to this summer.

Drive-in movie theaters around the country (yes, they still exist) have been doing solid business showing classic blockbusters like Jaws and Jurassic Park, and recently, many outdoor concert venues have reimagined their lawns as drive-in friendly venues. Earlier this month, Brad Paisley headlined a three-city “Live From the Drive-In” concert series organized by Live Nation, and they’ve announced more shows in more cities. These concerts went smoothly, but this weekend, a drive-in charity concert in the Hamptons proved that not all drive-ins are equally safe.

As I’m sure you’ve heard by now, the Southampton concert was headlined by The Chainsmokers, but it wasn’t just your average EDM show. The event was in support of numerous local charities including No Kid Hungry and the Children’s Medical Fund of New York. And in the name of raising money, tickets for the event came at steep prices—$850 for the cheapest package, all the way up to a $25,000 package that came with its own RV for the night. And opening for The Chainsmokers was none other than Goldman Sachs CEO David Solomon (aka DJ D-Sol). Yes, really.

Not to knock DJ D-Sol’s um, skills, but it’s pretty clear who this event was catered to. With ticket prices like that, it’s no big surprise that the concert drew a who’s who of the Hamptons summer set. Notable attendees included major influencers like Danielle Bernstein and Melissa Wood, along with Conor Kennedy (American royalty and, more importantly, Taylor Swift’s ex). Even Arielle Charnas’ parents left the house for some much-needed EDM.

Besides the audience area being divided into drive-in spaces, event promoter In the Know Experience spoke to Buzzfeed and outlined additional precautions, including temperature checks upon entry, free hand sanitizer and masks provided to all concertgoers, and “dividers separating individual parties in the pit area.” Sorry, but you could not pay me enough money to be in a “pit area” right now. The concert happened on Saturday night, and it didn’t take long for a video from the show to make the rounds on Twitter, calling into question the safety of the event.

The Chainsmokers had a “Drive-in” concert in the Hamptons last night…looks like social distancing was strongly enforced 🤦🏻‍♂️….when NY gets the inevitable spike just blame these rich selfish white people

The video is dark and very brief, so it’s hard to see exactly what the situation is, but that certainly looks like a packed crowd. Whatever precautions were taken, people clearly weren’t social distancing. One concertgoer told Buzzfeed that she “felt super safe and it was tons of fun,” but when it comes to this pandemic, feeling safe and actually being safe are not always the same thing.

Melissa Wood even posted an Instagram story on Sunday to clear the air about the concert. She said that guests had to fill out a “COVID-19 questionnaire” before purchasing tickets. But with tickets going on sale at least a few days before the concert, filling out a questionnaire in advance doesn’t guarantee safety.

Wood said that “each vehicle was parked in its own designated area,” and that she wore a mask the entire night, as did her “small group.” She finished her message by claiming that people “are unaware of what the event actually detailed.”

Despite what attendees may have said, those seeing photos and videos from the concert—including New York government officials—remained unconvinced. On Monday, New York State Health Commissioner H0ward Zucker sent a letter to Southampton Town Supervisor Jay Schneiderman, eviscerating him for the decision to let the event happen. Zucker wrote that he was “greatly disturbed” by images from the event, and said, “I am at a loss as to how the Town of Southampton could have issued a permit for such an event, how they believed it was legal and not an obvious public health threat.”

After that, it wasn’t long before the big guns came out, with NY Governor Andrew Cuomo slamming the event on Twitter. Cuomo stated that the videos show “egregious social distancing violations,” and suggested that the event was an “illegal & reckless endangerment of public health.” He said that the NY Department of Health will be investigating the event, and given what Health Commissioner Zucker already publicly said, I have a feeling someone’s getting in big trouble.

Videos from a concert held in Southampton on Saturday show egregious social distancing violations. I am appalled.

The Department of Health will conduct an investigation.

We have no tolerance for the illegal & reckless endangerment of public health.pic.twitter.com/gf9kggdo8w

In the last couple weeks, as New York has continued to reopen, Governor Cuomo has made it clear that he has little tolerance for those who do not follow the rules. Hundreds of restaurants and bars have been penalized for failing to comply with reopening protocols, with punishments including fines and suspension of liquor licenses. While COVID-19 cases have skyrocketed in much of the country, statistics in New York—once the epicenter of the pandemic—have held steady in recent weeks. These reopening guidelines, in addition to strict quarantine requirements for out-of-state travelers, offer the best chance of avoiding a major spike, so it’s easy to see why Cuomo is taking such a strong stance.

It’s like the new social media phenomenon of people saying “don’t worry, we followed all the rules!”, when the post clearly shows them following none of the rules. It’s a lazy way of trying to dodge criticism, and while seeing a handful of people justifying a social gathering is questionable, seeing 2,000 rich people packed together at a concert (and then claiming they were being completely cautious) is way more alarming. I guess those people should’ve just stayed in the back seat of their Rovers…