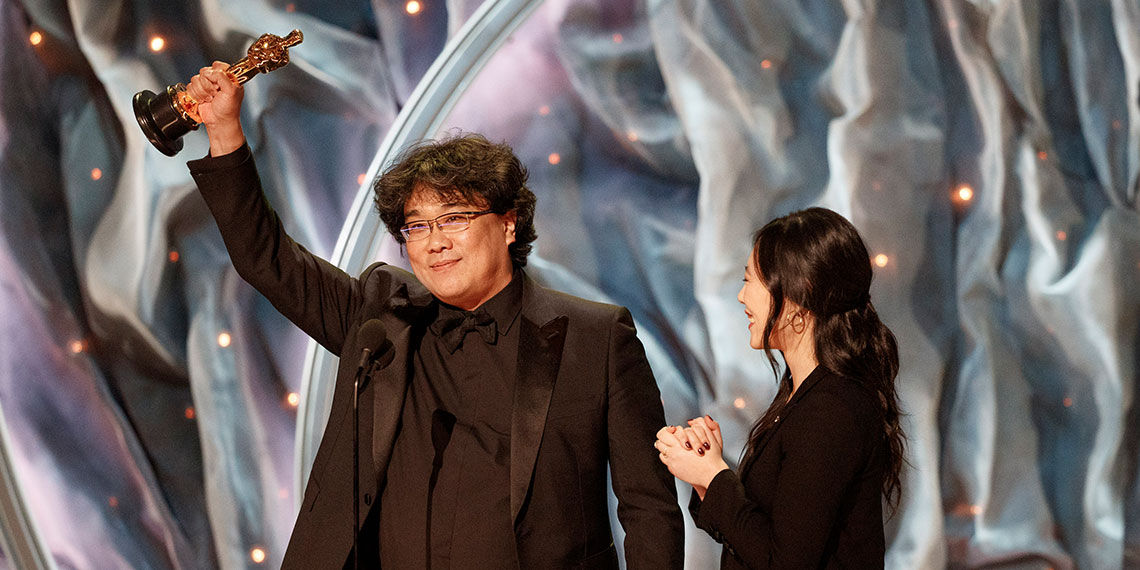 The longest and most packed awards season yet has finally come to a close with last night’s 2020 Oscars. While usually Hollywood gives us a f*cking break for a couple of weeks (and a chance to enjoy one single Sunday in early 2020), this year they moved the Oscars from late February to the weekend after the Super Bowl. While I’m glad that celebrities have nothing better to do, the rest of us would like to actually go to bed before midnight on a Sunday.

This year, the Oscars decided to forego a host yet again, probably because Steve Martin and Chris Rock wouldn’t agree to do it. In years past, this has been a good choice to help keep things moving, but this year instead of host monologues, they filled the time with 5-minute montages of every nominated movie for every award. The result was a Hollywood circle jerk that was FOUR HOURS LONG. Think about that. That’s half a work day. That’s about two hours longer than it needed to be. There is really no reason for it to run that long.

The Academy seemed acutely aware of all the criticisms that have been levied against it (especially in the diversity department, or lack thereof), so they decided to respond to that by having literally every presenter make some sort of joke or crack about it. I’m glad that they are at least not pretending to brush their systematic issues under the rug, and I love shade as much as the next bitch, but you know what would be a good way to fix their issues? Actually fix them and nominate more diverse contenders. It’s like when I joke about being single and lonely but never actually go on dates.

Janelle Monáe opened the ceremony by singing the Mr. Rogers theme song, making her the only person who could be even more lovable than Tom Hanks.

Janelle continued to prove why she’s Hollywood’s most lovable weirdo with her next song, where the background dancers were each dressed as a character from one of the nominated films. When she tried to get all the random celebrities in the audience to sing along with her by holding a mic up to their face, it was everything. Some were into it, but most were really not. Which is weird, because you’d think these people would do anything for more attention and camera time. It reminded me of when I go to a restaurant and they sing “happy birthday” to me, which is only a little traumatic.

Steve Martin and Chris Rock presented the first award, which Steve says was a huge demotion. One of the best moments, though, was when Chris Rock made fun of Jeff Bezos (who was in attendance for some reason), saying Bezos “thought Marriage Story was a comedy,” and that “He’s so rich he got divorced and is still the richest man on Earth.”

Shia LaBoeuf emerged from whatever cave he’s been living in to present the award for Best Live Action Short Film. In a touching moment, he shared the stage with his Peanut Butter Falcon costar, Zack Gottsagen, who has Down syndrome. You can tell that Shia and Zack really have a special bond, and their moment together warmed my cold, dead heart.

Maya Rudolph and Kristen Wiig were hilariously pissed off and wouldn’t tell anyone why when presenting the award for Best Costume Design, which made sense because Kristen came dressed as a giant menstrual pad. Their singing medley about best costume design was hilarious, and not just because it brought us one of the best memes of the night, Billie Eilish’s confused reaction to their impromptu rendition of “The Thong Song”.

Will Ferrell and Julia Louis-Dreyfus were all of us trying to pretend we know what cinematography actually is. “It’s like the person who knocks on my trailer door and tells me I have to get on set!”

Diane Keaton was on another planet when she presented Best Original Screenplay with Keanu Reeves, wearing not one, but two tweed coats and a wide-brimmed hat. Basically, she looked like Carmen San Diego but in black and white. She almost opened the envelope before even announcing the nominees, and then almost dropped the envelope announcing the winner. Diane, never change.

Rebel Wilson and James Corden dressed up as Cats characters saying “no one better than us understands the importance of good visual effects,” which was expert level shade. I also was way too captivated watching them hit the mic back and forth for like, three full minutes, pretending to be cats.

Regina King presented the award for Best Supporting Actor, with Brad Pitt winning for Once Upon A Time In Hollywood, his first Oscar win. Don’t get me wrong, I was happy for Brad, but salty that Jen was not in attendance so we could have more memes of them holding hands. Like, what, did she have something better to do last night? Brad dedicated his speech to Quentin Tarantino, saying, “the film industry would be a darker place without you.” Which leads me to believe he hasn’t seen a Tarantino movie? Because they’re pretty f*cking dark.

Toy Story 4 won for Best Animated Movie, and while the millennial in me was thrilled about it, the part of my brain that uses logic was not. Let’s call a spade a spade: Toy Story 4 was an enjoyable movie, but it did not need to happen. Toy Story 3 was a perfect close-out to the series, and now that the fourth one has one an Oscar, Disney/Pixar are going to keep marring this otherwise perfect series by bringing us a fifth movie that nobody wants or needs.

Jojo Rabbit won for Best Adapted Screenplay, and you could tell he was so nervous up there that I wanted to give him a hug. As an indigenous person from New Zealand, Taika was one of the few bits of diversity among the writing and directing nominees this year, so it was great to see him take home an award.

Laura Dern won Best Supporting Actress for her role in Marriage Story, which has got to be the only time I’ve been upset about Laura Dern winning an award. Judging by Twitter’s reactions, I’m pretty sure I’m alone on this, but still. Justice for Florence! (As an aside, I guess this means I need to watch Marriage Story, which I’m reluctant to do because my first-person account of love and dating in 2020 is bleak enough as it is.)

Elton John and Bernie Taupin won for Best Original Song in Rocketman. The song itself is kind of forgettable, but no one is gonna complain about Elton John winning an Oscar. Actually, I’m sure the people behind Frozen II are gonna complain, but maybe they should focus on fixing the plot holes in their movie first.

Joaquin Phoenix won for Best Actor in Joker, and his acceptance speech was almost as confusing as Eminem’s performance (more on that in a sec). He went from artificially inseminating cows, to talking about how bad milk is, to somehow relating it to human rights? That sounds like something I dreamed up while high, but I swear it actually happened.

Renée Zellweger won her second Best Actress Oscar for her portrayal of Judy Garland, which really was incredible. Also incredible is Renée’s journey from a few years ago, when she resurfaced in Hollywood, and all people could talk about was that her face looked different. We love a comeback story.

And of course, last but not least, Parasite really cleaned up, winning Best Original Screenplay, Best International Film, Best Director, and finally, Best Picture. Is the Academy listening to everyone (and I mean everyone)’s calls for diversity? (Maybe not, because the women still got screwed.) But still, it’s something. Everyone in the audience was thrilled for them, meaning that for once, the Academy didn’t f*ck it up—except for when they tried to dim the lights on the Parasite crew’s acceptance speeches and the entire audience chanted until they put the lights back on and gave everyone their time. Look, if you let Joaquin Phoenix ramble on about artificially inseminating cows for seven minutes, you could give the Best Picture winners more than their 45 seconds.

I’m still not sure why Eminem came out to sing “Lose Yourself” in 2020, but I do know that I cheered out loud when it happened. It was our Shakira/J.Lo Halftime Show. I would kill to be a fly on the wall in that pitch meeting. The best part of the entire awards ceremony were all the confused faces they panned to in the audience.

Cynthia Erivo looked incredible, and almost like an Oscar, performing the song from Harriet. I’m a little salty she didn’t win for this song, just because she would’ve been the youngest person to ever EGOT, but who can really be mad about losing to Elton John?

Chrissy Metz showed up to sing “I’m Standing With You” from the movie Breakthrough, which I had never heard of until *checks watch* 12 hours ago. Turns out, Chrissy Metz can actually sing, but I’m not sure why she’s doing random movies about the power of Jesus. Girl, I know those This Is Us checks are nice, so take a break.

The performance of “Into The Unknown” from Frozen II was actually really cool, because they had Elsas from a bunch of different countries sing parts of the song in their own languages. This was also smart because it meant that Idina Menzel only really had to sing one verse. Last time she sang at the Oscars, it didn’t go super great, but this time was much better. See you back here in four years for Frozen 3!

Elton John sang the original song from Rocketman, which, as I said, is kind of forgettable. I know that he was supposed to perform the song that was nominated, but I feel like he should’ve just said f*ck it and sang a medley of his hits. Give the people “Benny & The Jets”!!!

Billie Eilish showed up to sing “Yesterday” during the in memoriam segment, and she did a great job. Sadly, I was already falling asleep by the time they got to her, but that’s not her fault *glares at the Oscar producers*. I feel like the old white men who plan the Oscars saw her win all those Grammys, and were like “who’s that girl and how do we get her?” The Academy kind of f*cked up by not including Luke Perry in the tribute, especially considering that he had a small part in Once Upon A Time In Hollywood. It felt rude, to say the least.

The 2020 Oscars managed to do the impossible and be even longer than last year, which means I’m going to need to go to bed at 8pm every night this week to make up for all the lost sleep. There were no big upsets or surprises this year (looking at you, Shape of Water), except for the fact that I didn’t really think the Academy would do the right thing and choose Parasite for Best Picture. But I’m glad they did! Overall, every win was pretty well-deserved, and there was nothing too controversial. Now just call me Bong Joon-ho, because I’m ready to drink tonight.