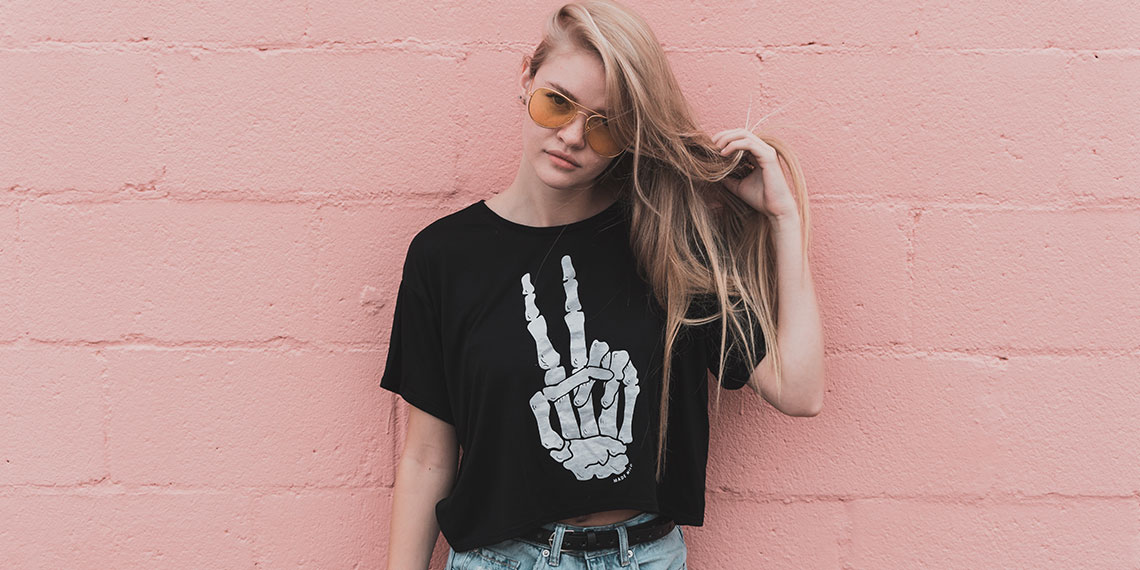 I live and die for Halloween. I recently told a few friends that I couldn’t make dinner plans Halloween weekend because, although I currently don’t have plans, if we’re not doing something that requires a costume, I am not going. And while I’ve had my costume planned for the last six months and I’m dying my hair blue for real just for the costume, I understand that not everyone loves Halloween as much as I do. Or like, even if they do, they might have actual real lives and things to do aside from planning one outfit half a year in advance (what’s that like?). But if you have a ton of other things to focus on, or just DGAF about buying an elaborate costume for Halloween, there are still options for you to look amazing that don’t require a ton of work. I found some cute options that are cheap, easy to throw together, and look like you actually care about the greatest day of the year.

🌟 S C T A K E O V E R 🌟 So I made lil tutorial on @__worldofbeauty__ Snapchat! If youre interested of seeing how you can do this easy last minute Halloween-look go ahead and add 👻 WOBtakeover on Snapchat! And me too !👻Bangtsikitsiki #udmhalloween

I’ve seen this costume around for several years now and I think it’s such a cute idea. All you have to do is throw on a flannel and some overalls you probably already own, or even just mom jeans if overalls aren’t your thing. Get a cute straw hat or use your beach hat from the summer. Then the rest is just makeup. Load up on eyeliner, draw in a mouth, get some cheap drugstore black lipstick, and draw in an orange nose and cheeks. It’s so simple and really requires zero artistic ability, but looks really put-together.

Because the hardcore girls just wear lingerie and some sort of animal ears, you can throw together an easy costume that everyone will get with this hilarious “I’m a mouse, duh” shirt. Also, huge oversize shirts are so trendy right now that you’ll definitely be able to wear this post-Halloween too. Get some cute mouse years from Amazon or just make your own, pair with chic over the knee boots, and if you really want to sell it, you can draw on a little nose and whiskers. This costume is so comfortable you can literally just wear it straight to bed when you come home hammered.

Wednesday Addams is an absolute classic and an easy costume for anyone. I’ve been Wednesday myself several times as an additional backup costume. This dress is super cute from Hot Topic and you’ll definitely be able to rewear it afterwards. To sell the Wednesday look, braid your hair in pigtails, do some dark makeup, and look morose. Costume finished!

I am obsessed with Stranger Things and Eleven’s new 80s look is perfect for a quick costume. I also definitely bought this shirt from Hot Topic just to wear in real life. Costume pieces you can actually rewear are the best. Not only is this outfit really easy to throw together, but to make sure you look like Eleven, put your hair half up with a scrunchie, draw in a nosebleed with lipstick, and carry around a box of Eggos. Not only will everyone get it, but it’s way cooler than the pink-dress version of Eleven that has been way overdone for the past few years. It also has the makings for a great group costume.

Do you have a red and white striped shirt? What about glasses? Then you can throw together a super easy Where’s Waldo costume. If you want to be an overachiever, get a matching beanie. You can even buy this cheap set from Amazon if you want to be extra about it. The nice thing about being Waldo for Halloween is it’s so recognizable and doesn’t require a bunch of makeup or styling. You can throw it on and be good to go. Plus, then you can photobomb random people’s pictures all night and be hilarious. I mean, that’s what I would do.

This is my favorite of the bunch. Just be dead. Literally dead. Not only do you get to wear a super comfy sweatshirt, but it’s so funny. I would pair it with a skirt and boots, and if you want to really go for it, do some ghostly dead girl makeup, too, complete with dark lipstick. Or you could just be like me and never, ever sleep. Then you’ll already have the dark circles and sunken-in look! Don’t forget the cold, dead look in your eyes that only comes from true exhaustion! Perfect!

Please post pics of your favorite last minute costumes in the comments!

Images: Hot Topic (2); Shop Betches (2); bangtsikitsiki / Instagram; Giphy (3)
Betches may receive a portion of revenue if you click a link and purchase a product or service. The links are independently placed and do not influence editorial content.