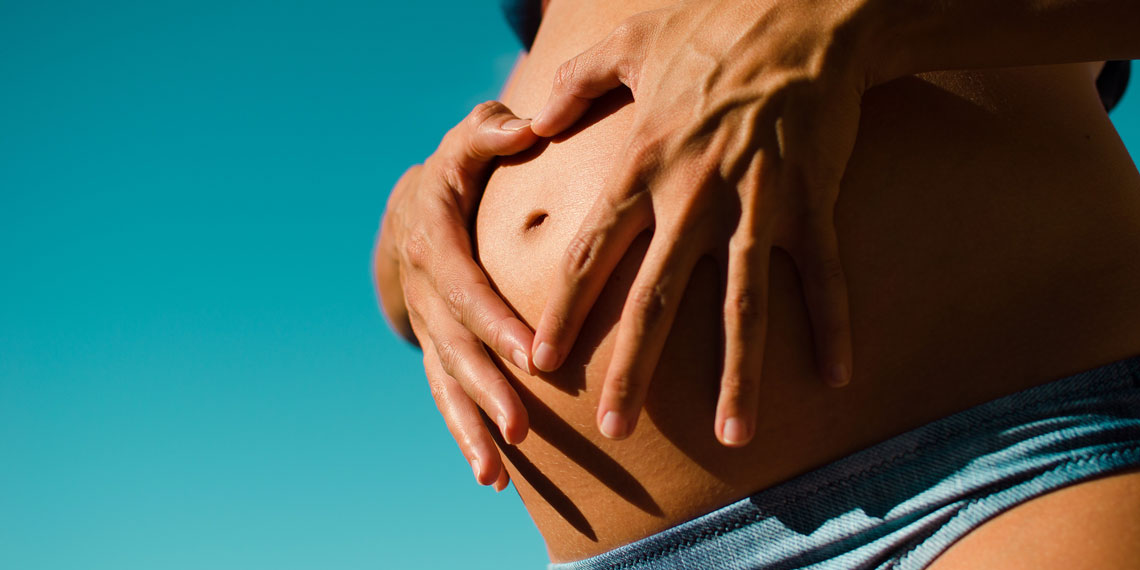 “Oh, he definitely could have fit through that tiny vagina, he’s so small.” Words I feel like I have strangely heard before. However, this time it’s coming from the most low-key hilarious doctors a girl could have as they rip my son out of my bleeding stomach during my planned C-section. Drugged up and awaiting my baby’s arrival, I’ve listened to the two of them talk about sushi, beer, my tidy, hairless lady parts, and the Mets—all entertaining, but not as wonderful as the sound of my son’s first cries. There’s nothing in the world like it. I know he’s going to be worth every bit of the hell my body is going to experience in the days, weeks, months, and years to come, and he is.

As pregnant women, we tend to think the relief from an alien invasion of our body is over the second that baby is out of us. It’s the end of running home from the grocery store to puke in the driveway, sneaking hotdogs and Italian combo grinders on the DL, and praying every time you get on the scale that this is the last pound you’re going to gain.

Suddenly, all that is over and you can drink a Bud heavy and have sex like you just got out of prison without worrying you are going to injure the baby, and yasss you can see and touch your toes. Time to start modeling. We think our body is our own again. Think again. It may be our own, but it will never be the same.

There are so many changes in store post-delivering a baby that women don’t talk about or realize until it happens to them and they’re on WebMD and an internet chat at 4am where fake doctors respond to desperate mothers’ questions 9 months later with the reassuring answer “Sounds like you should contact your doctor”. No sh*t.

That’s clearly not going to help you, so here are a few things to expect post-giving birth that you don’t need to call your doctor about or check a stagnant postpartum forum for.

You’re going to have boob issues; just know that. People always talk about the joys and pains of nursing and their nipple problems, especially when you don’t want or need to hear those details. But they rarely talk about the pain of not nursing right out the gate.

The second I got pregnant I knew I wasn’t going to nurse because I was fantasizing about having a glass of wine as soon as the baby crowned. And I also knew I was too selfish to be bothered with pumping anything aside from my fist while watching Jersey Shore with that wine that I waited nine months for.

While I totally advocate for and support breastfeeding, it was never in my motherhood plans. However, if someone had told me that the pain of my breast milk coming in and not being released would be the only reason for me to take the Percocet prescribed to me—that I refused to take even for my C-section pain—I would have probably nursed everyone in the neighborhood’s kids along with mine.

It was some of the worst pain I have ever felt in my life. For about 10 days, there was no relief in sight. My doctor suggested that I induce a day’s worth of diarrhea by drinking magnesium citrate, which would dehydrate me and dry up my milk. While dropping a quick five pounds in a day sounded tempting, instead, I suffered the pain, iced my chest, wrapped them up in tape, drugged myself, and waited it out. Lesson learned: the pain from not nursing is your body’s primitive way of saying get your sh*t together, this kid needs your milk.

Blood, blood and more blood. Oh, the good old lochia—the vaginal discharge after giving birth—containing blood, mucus, and uterine tissue, aka, the delivery of the second twin you didn’t know was sharing your uterus with your newborn. I seriously could have named and christened mine and got more money and gifts. What my body passed in the weeks after my baby was traumatizing.

My desire and hope to feel sexy again was shattered not only by this, but also by the adult diaper that I needed to wear for 4 weeks postpartum. However, the silver lining I found in that nonstop hemorrhaging was that the king sized pads I came home from the hospital with came in handy down the road when my period became a regular massacre every month post-baby (and still is 9 years later). And when I ran out of them, I hit up my sister after her baby’s birth. It was like finding gold in her bathroom closet. These elephant pads also are useful for long car trips and situations where you might not be able to pee for a long time, can’t hold it, or might pee your pants if you cough—which yes, are post-baby consolation prizes as well.

3. Your Body Parts Will Grow

No one tells you that when your body parts grow during pregnancy, there’s a good chance that some of them never go back to pre-baby size. Thankfully, I can’t speak about this in relation to the havoc wreaked on vaginas during childbirth, but I am pretty sure stitching mine back together isn’t on my bucket list with the other things involving my vagina.

Hopefully, your stomach will be something that does eventually go back to size, but that doesn’t mean your swollen feet will. My petite size 5’s went up to a 5.5/6, which I don’t really mind because now I can find shoes at Marshall’s, an impossible feat for anyone under a size 7. However, if you’re already a size 9 and are moving on up to a 10, blame the baby. I was lucky to now not only love my son for everything he is, but because he gave me a good shoe size, and more importantly, an ass that celebrities pay for.

During my pregnancy, I was concerned that I started to grow out back rather than the front, which happens for some due to all the sitting on your ass on the couch eating ice cream watching Bravo, but I learned post-delivery that this doesn’t have to be a bad thing. I took that gain and added some squats, then bam, there was the butt that luckily became trendy the year my son was born thanks to the Kardashians.

4. Your Hair May Not

While some body parts may get bigger and possibly better, like your boobs and your butt, expect that some do not. One of these is your hair.  You may have to say goodbye to the long luscious locks that prenatals gave you as your hormones go haywire. You’ll start collecting your old friends out of the shower drain, talking to them, and analyzing them as you decide to play the game of lining up only washing your hair when you have actual plans and which days of the week you could compromise losing 85 more strands for a good blowout.

All in all, remember that hormones don’t just affect your hair, they run your life. So most importantly, be aware of that and that everything you are experiencing post-baby is a result of what your body just endured sharing it with your little ball of sunshine for nine months. God made women responsible for giving birth because he knows we can handle it and don’t call out over a head cold like men.

So when your C-section scar has a stomach of its own (in addition to your stomach’s stomach), and your hemorrhoids prevent you from doing the really good type of sex, look at your baby and remember that they’re worth all of it. The best you can do is drink the bottle of wine that it takes to go to sleep some nights and cherish every moment with them because they grow so fast and chances are you would do it all over again just to share this crazy life with them.

Marcey is a licensed clinical therapist who gets paid to give people advice that she doesn’t take for herself. She’s a divorced single AF mom but she’s not a regular mom she’s a cool mom whose lifelong dreams are to meet Taylor Swift and be on The Bachelorette. When she’s not on mom duty or listening to people complain for a living, she spends her time making her friends go drinking, working out and shopping on Fashion Nova so she can post thirst traps to piss off her exes. Follow her on IG to see this for yourself @marsee19