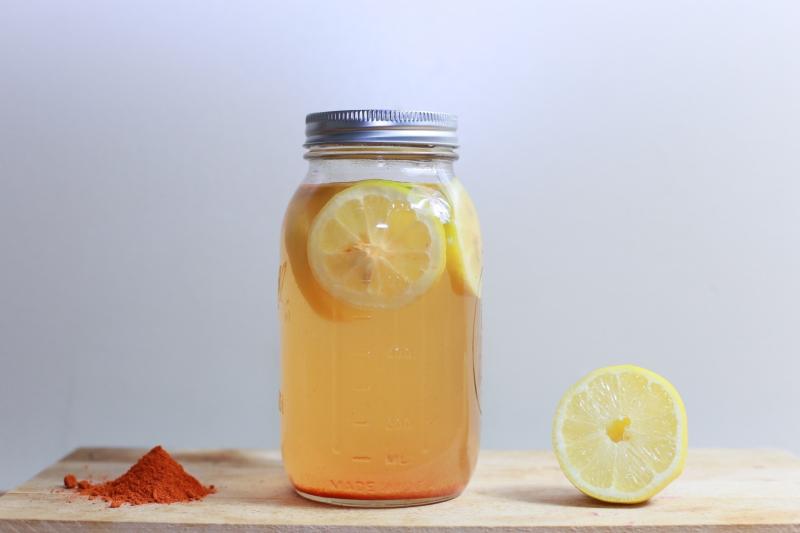 Over the past 10 days I have been taking part in the Master Cleanse, because a friend of mine doubted my ability to put my own life in danger in order to prove a point. What follows is the story of my journey: the ups (there were few), the downs (there were a lot), and the moments where I questioned my own sanity (the entire goddamn time).

For those of you blissfully unaware of what I’m talking about, I’ll explain. The Master Cleanse is a 10-day all liquid diet consisting of a lemonade-like concoction, an herbal detox tea, and a salt water flush. It was created in the 1940’s by a sadist named Stanley Burroughs, who was an early advocate of “natural health” and believed in the body’s ability to heal itself without interference from pesky things like medicine. He claimed his cleanse would provide a “lifetime of freedom from disease,” despite his lack of any kind of medical degree. It’s cool, he stayed at a Holiday Inn last night.

One of the biggest endorsers of the cleanse is Beyoncé once, who most noticeably used it to lose weight for her role in Dream Girls. Master Cleanse advocates (people who hate themselves) use her for validation the way white guys use Eminem to justify their shitty #4BarFridays. This, possibly more than anything else about the experience, infuriated me. “It works for Beyoncé, so it will work for you, too!” is the worst fucking logic I have ever heard in my entire life. If everything that Beyoncé did worked for me, I wouldn’t be wasting my time with a cleanse, because I would be too busy being Beyoncé.

All of this aside, I was challenged. And so, because I am a masochist with far too much pride and zero regard for my own health, I agreed. More accurately I turned to my friend and said, “challenge accepted, asshole.” You know, for the sake of objective retelling.

Before we get any further into my journey, let me establish that by no means am I promoting this cleanse. It is miserable and unhealthy and I wouldn’t wish it on my worst enemy (probably). Also, full disclosure: I didn’t fastidiously follow the rules. I allowed myself one soy latte a day, because I wasn’t trying to lose my job or ruin the lives of everyone around me. My loved ones didn’t sign up to suffer, and therefore shouldn’t have to be subjected to the monster that is me without caffeine. You can take my freedom and my will to live, but you cannot take my coffee. I also drank alcohol halfway through because I am merely human and therefore subject to mortal whims such as FOMO. However, I didn’t eat any food for ten fucking days, so I think I earned my thrills where I could get them. Sue me.

Signs the Master Cleanse is right for you:

– You enjoy being lectured by friends, family members, coworkers, strangers, and even grocery store employees about your life choices. If you decide to go through with this I highly recommend you tell absolutely no one, because the only thing more miserable than not being allowed to eat for ten days is having to listen to people tell you how stupid you are while you do it.

–        You are neither morally nor ethically opposed to paying nearly $10 for a miniature bottle of Organic Grade B Maple Syrup. You must also not mind returning to the store two more times because you didn’t realize that in order to become Beyoncé you had to guzzle maple syrup like a drunken Canadian.

If any of the above applies to you, buckle up because you’re in for a wild ride. Over the course of this cleanse you’re going to consume about 40 lemons. The good news: you definitely won’t be getting scurvy anytime soon. Hopefully you weren’t too partial to the lining of your stomach or the enamel on your teeth. You’ll also drink 60-80 tablespoons (depending on your preference) of maple syrup, which amounts to 4-5 cups. Try not to think about that part too much.

The Grade B syrup is supposed to be less refined than other kinds, and therefore better for you. It turns out this is absolute bullshit. After a little research that I hoped would validate three separate trips to the store for this absurdly expensive pancake topping, I found out that all syrup is manufactured the same. The only difference between Grade A and Grade B is color, which affects the intensity of the flavor. “You know what it doesn’t affect? The fact that you drank half a cup of syrup a day for 10 days, you sick fuck,” I whisper to myself during my third trip to Whole Foods, because by day 7 you start to lose your grip on things like social etiquette and reality.

This is a rough outline of the schedule I followed for my particular cleanse. I say rough because, if you have any self-preservation instincts at all, you can only chug a liter of salt water a day for so long before you abandon the notion completely.

Morning: 6 oz. of herbal detox tea. I used Get Clean from The Republic of Tea, which tasted kind of like an almond chai. I’m not much of tea person (because coffee exists and I’m not trying to waste my time) but I actually enjoyed this. Putting sugar in it kind of defeats the purpose, so you just drink it plain.

Night: The salt water flush. The goddamn salt water flush. Dissolve 1-2 tsp. of uniodized salt and 1 liberal pinch of nightmares into a liter of warm water, and then chug it. Don’t even question the merits of a diet plan heralding from a time before antibiotics were common practice, just chug the fucking salt water. If you’re looking for a similar experience, go stand in the ocean during high tide with your mouth open. It’s all right, Beyoncé wants you to do it. I managed this for three days before I gave up on it completely, and opted for another serving of the detox tea instead, because I value my sanity over the sanctity of the cleanse.

Throughout the day: Two liters of the lemonade. You can split this up however you like, so I made one liter in the morning to take to work, and then one to have when I got home. Each batch contained:

The first time you try the concoction you’re pleasantly surprised. “Like, wow this is a refreshing lemonade and I hardly feel like I’m drinking maple syrup.” Then a clump of cayenne pepper hits the back of your throat and you momentarily imagine your own death. Don’t worry, it passes. Supposedly the cayenne is there to boost your metabolism, but personally, I think it’s to keep you from chugging the entire liter in the first hour of the day. Your natural human aversion to spicy lemonade wears off pretty quick, and by the end of the cleanse I could probably eat spoonfuls of cayenne unphased. Talk about unadvertised perks.

For those of you who are curious, you can in fact pour vodka into your lemonade (because, like, it never said explicitly not to) and it isn’t terrible. Moving on.

I won’t lie, in the beginning of this little experiment I was psyched. I approached it with all the excitement and naïveté of someone who has never gone a week and a half without eating before. This was my first quintessential writer moment. I was Hannah Horvath and the cleanse was my Wednesday night date with coke. I was already planning pithy names for my article like “How to Lose Your Will to Live in Ten Days,” and daydreaming about the number of ways I could tell someone “I told you so.” Needless to say, the unbridled energy didn’t last long. In fact, it lasted only until the next day, when I realized that not eating food makes you really fucking tired. Getting out of bed was impossible. Working was impossible. Being even moderately civil was impossible, and it was only day two. Spirits were low.

On day three, Zayn left One Direction and everything else is a blur. Morale plummeted. I’m assuming I was hungry.

Day four was the first time I felt like I had a real grasp on my hunger. I was over the hump. Like, any other moderately important responsibility, I knew it was there but had no problem blatantly ignoring it. “This won’t be so bad after all,” I said smugly, because apparently I developed a habit of speaking to myself out loud throughout my journey.

It was at this point, at the height of my hubris, that I realized I wouldn’t be able to participate in happy hour that week, and immediately lost any momentum I had gained. Deprived of food? Sure, I knew that was part of the deal. Deprived of happy hour? I hadn’t even considered such injustices. Slowly it dawned on me that this also meant I wouldn’t be able to go out at all that weekend, because apparently participants in the master cleanse also don’t have friends. Devastation set in.

Day five was spent in heavy meditation (Burroughs would be so proud), after which I decided that Beyoncé wouldn’t want me to sacrifice my social life in my quest to become her. This was an eye-opening night for me, because I discovered just how much I can drink on a five day empty stomach (spoiler alert: a lot). I woke up on day six without a hangover, thanking God for the Irish heritage that permits such behavior and cursing the lack of hashbrowns in my life.

From then on, it was relatively smooth sailing. Be it my stubborn nature, or the fact that my body had resigned itself to death, I made it to the end. Sure, there were the occasional hunger pains and bouts of light-headedness, but they passed without incident. I think part of what made this so much easier than I expected (which is to say, not easy at all but merely possible) was the clarity of it. Unlike a normal diet where I could questionably try to justify something I wanted to eat, the cleanse was crystal clear. Is this thing you’re trying to consume a bottle your stupid fucking spicy lemonade? No? Tough shit, you can’t have it. There’s not a whole lot of room for error there.

Real talk: I lost 10 lbs. in 10 days (this was actually only a measurement from day 4 on, because I may have forgotten to weigh myself beforehand). I am under no impression that this is a lasting effect, mostly because I know I’m about to be knee-deep in some Taco Bell tomorrow night. But in the short term, I can’t deny the results, however miserable the method of getting said results was. There are definitely less grueling approaches to losing weight, and they probably won’t result in an ulcer and a lifetime aversion to maple syrup. I hope this is clear, but I would absolutely not recommend anyone do this.

– My appetite is significantly decreased.

– I have a very different perspective on how much food I actually require to sustain myself.

–  I have developed an inhuman tolerance for spicy drinks, which means my Bloody Mary game is about to be even more on point than it was before.

– My family looks at me with a mixture of awe and fear any time I enter a room.

More important than anything else that may have resulted from it, this cleanse serves as a warning for anyone in the future: do not test me. I have a very particular set of skills. I will take you up on it, I will win, I will write a long-winded article about it, and then I will mail you said article in a frame, signed “suck it.” You have been warned.