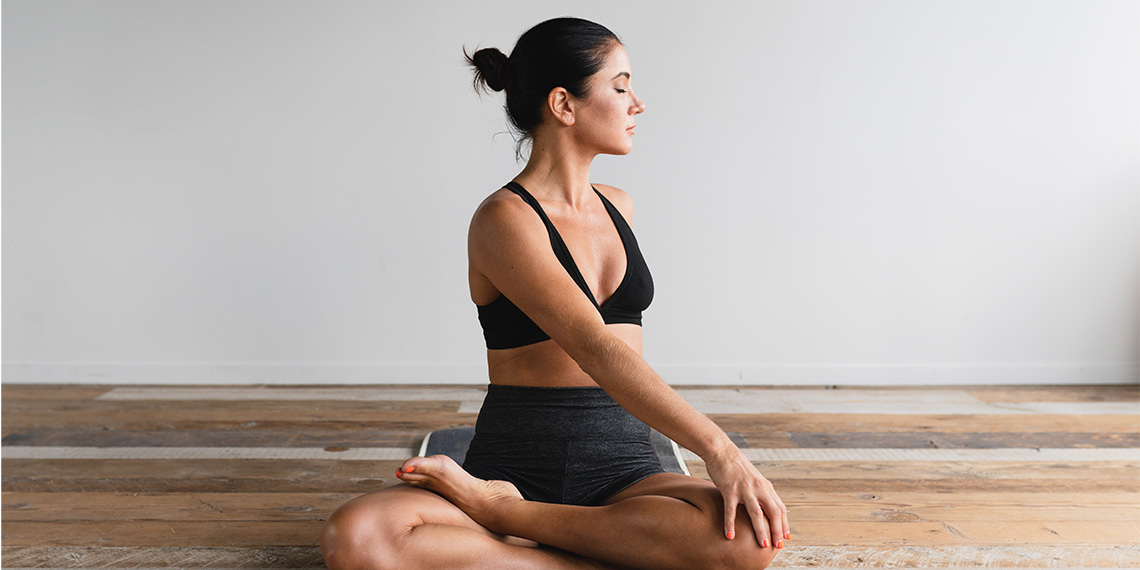 Yoga Shouldn’t Be About Achieving ‘Hotness’: A Beginner’s Guide To Spiritual Yoga

Do you hate spin class, CrossFit, and workouts that involve people with conventionally “perfect” bodies yelling at you? Are you a millennial having an existential crisis? If you answered yes to both or either of these questions, I highly recommend spiritual yoga.

When I hear the term “yoga,” I automatically think of girls with perky butts doing the splits. The truth is, though, yoga was never meant to turn into what it is now. Many people forget, or just flat-out don’t know, that yoga was around looooong before Lululemon started charging $125 for stretchy fabric. Yoga originated in India all the way back in 3,000 BCE (Boomers hadn’t even been born yet). Its original purpose was to serve as a practice to help people achieve Samadhi, a state of pure awareness. Since its creation, yoga has branched off into a ton of different forms. They all maintained the common goal of connecting the mind and the body, just in different ways.

The thing is that the kind of fitness yoga that is so popular now tends to take the mind out of the equation and focuses on just the body. Basically, Americans did what we do best: we commercialized something meaningful and rebranded it into a way to achieve “hotness.” A spiritual yoga class probably won’t get you much closer to achieving Michelle Obama’s toned arms or Rihanna’s phenomenal ~cake~ but that’s kind of the whole point. It hangs on to the dangling thread of the mind-body connection. One of the best things you can do going into a spiritual yoga class is drop the CorePower Yoga mindset of “I’m paying $150 a month for this, so I better look bomb in a bikini.” If anything, just don’t overthink the experience. That being said though, here are some things I probably should’ve thought about before my first spiritual yoga class.

“Yoga” has turned into such a broad term that it can be hard to know exactly what you’re getting into when you sign up for a yoga class. Here are a few signs that a class involves fitness yoga: the class uses the words “burn” or “sculpt” in its name, your friend suggests you take the class as a way to get over a hangover, or the studio the class is held in has floor-to-ceiling windows so the public can watch you like some sort of zoo animal in spandex. Spiritual yoga classes will usually reference specific types of yoga in their names/descriptions. The type of class I did involved hatha yoga. Some other common types of spiritual yoga include ashtanga and vinyasa yoga. The website YogiApproved offers a quiz to help you decide which form of spiritual yoga best fits you. So, take a break from BuzzFeed quizzes on what type of cheese matches your zodiac sign and try it out.

Once you’ve figured out what type of spiritual yoga you’re interested in, the obvious next step is to turn to the almighty Google. Include the name of the specific type of spiritual yoga you are looking for in your area, and, depending on where you live, you should find a decent amount of studios that offer these classes. Keep in mind that just by typing in the word “yoga” your search page will also include some of the big-name yoga studios like CorePower or YogaWorks. The likelihood of you finding traditional spiritual yoga classes at one of these studios is slim to none. Your best bet is to stick to the smaller studios. Think of the big-name studios as Olive Garden, and the smaller studios as a family owned Italian restaurant. While Olive Garden can offer you a great deal on an endless amount of breadsticks and salads, you can’t go in there expecting nonna in the back cooking her baked ziti recipe that’s been passed down in the family for generations.

It’s okay if you don’t own a $200 matching spandex outfit. In my opinion, nobody should. For spiritual yoga, throw on your $30 leggings, and I guarantee you’ll feel a little money saver’s high when you tell the woman who pulled up to class in a Range Rover that they’re from Target. Do NOT wear a loose T-shirt, though. It will expose your boobs during a majority of the positions, and you might feel the urge to say “oopsies” each time you pull it back down. Also, keep in mind that the people in these classes are usually the type who own multiple shirts that have different plays on the phrase “namaste” written on them. So, avoid wearing tops that say things like “I swear to drunk I’m not God” (totally random example…I didn’t definitely do this).

Before the class begins, you might be offered the opportunity to choose from essential oils with names that sound more like titles of Enya songs than actual fragrances. The scents are supposed to evoke different emotions/states of mind. Lavender is meant to calm you, peppermint helps with focus, tea tree makes you flashback to drinking too much vodka then throwing up in a Pizza Hut, etc. So, if you’re unsure of what emotion “myrrh” is supposed to bring out, just ask the instructor. When you pick one, remember that these oils are not poppers. Do not stick the vile directly under your nose and huff it like you are in a bathroom stall at a night club. Just rub one on the inside of your wrists and pretend that “sandalwood” doesn’t actually smell like a cedar closet that someone has been chain-smoking in.

One thing that really separates spiritual yoga from your typical fitness yoga is that the poses go beyond butt sculpting. Each of the poses have a different story and meaning behind them. My personal favorite pose was the “corpse pose” which consists of one of my biggest passions, lying on the ground. The corpse pose has a pretty literal meaning—you’re mimicking death in order to prepare yourself for it, which is actually very millennial for an ancient practice.

The “warrior pose” is a deep lunge accompanied by what essentially looks like pointing a finger gun in the air. This pose symbolizes the God, Shiva, who created a warrior, Virabhadra when she got pissed and ripped out another God’s hair (not in a Jersey Shore way, but in a dignified way). I respect the hell out of Shiva, and I suggest you look her up if you’re in need of some “I am woman, hear me roar” energy. The overall meaning behind the warrior pose is to overcome our ego and ignorance, and, if social media has shown us anything, it’s that most people are stupid and full of themselves.

The “tree pose” has to do with an epic poem (epic meaning a type of poem, not how people described skateboard tricks in the mid-2000s) about a woman named Sita who waited out in the woods for her exiled husband to return. Sita isn’t waiting for her man in the toxic Disney princess kind of way. She is using waiting for him as a time to practice patience, and this pose is your chance to practice this very important life skill for dealing with people’s BS. The tree pose is basically standing as firmly as you can with your arms by your side.

Some of you might be thinking that these poses sound nothing like the type of workout positions that will make you feel sore the next day. Once again, remember that you are not there for abs. You are there for something way more meaningful than 300 likes on a bikini pic. This is only a brief rundown on a few of the poses. Take some time to learn about the stories and meanings behind the poses you can expect during a spiritual yoga class. You will get so much more out of it.

At one point, the instructor was helping me get into a position that I’m pretty sure I saw a Russian gymnast do during the Olympics, and… how can I put this delicately… I “ripped ass.” I braced myself for the middle school moment when the earth stops turning, and everyone in class turns around so they can really punch in the humiliation. But, something amazing happened. The teacher patted me on the shoulder like the kind of mother I’ve always wanted and said, “Goooood. Let it out.” I was receiving praise for performing a bodily function, which is the kind of energy I’ve been searching for my entire life. This is what true self-acceptance must feel like. So, if you find yourself in this situation, don’t be alarmed. That’s just the sound of your unhealthy lifestyle leaving your body.

No, that is not a pill crusher your instructor just whipped out. It’s a “singing bowl.”

The singing bowl started in ancient Tibet. It’s basically a metal bowl that emits a sound when you circle the top of it with a mallet. This is not like when people wet their fingers and play “Viva La Vida” on wine glasses. The sounds that the bowl produces are frequencies that target different mind vibrations. Before you start rolling your eyes, hear me out. I won’t go deep into the science behind it because I’m the type of person who hears “beta” and thinks of a fraternity, not the brainwaves. Essentially, the sound frequencies stabilize different parts of your brain, which results in a calming effect. When the instructor first started using the singing bowl, I started peeking around to see if everyone else was buying into this. They were. Even Range Rover Lady seemed at a higher level of peace. So, I accepted that, as a person who could receive a medal for excellence in paranoid thinking, I’m not above giving vibrations a try. It felt like three years of therapy within five minutes. So, GIVE IN TO THE VIBRATIONS! Give in to every part of the spiritual yoga experience.

If you’re living in an area that doesn’t offer any in-person spiritual yoga classes, or you’re trying to be COVID-conscious, online classes are a superb option. YouTube has taught us about everything from the electoral college, to algebra, to making guacamole, to perfecting the smokey eye, etc. So, why shouldn’t we give it a shot to teach us spiritual yoga? There are soooo many classes on YouTube that can offer you an authentic experience for whatever type of spiritual yoga you are interested in. There are also yoga-specific websites that offer online spiritual yoga classes. These sites usually require you to pay for classes or for a subscription, but they are great for keeping you on a schedule. Whatever type or way you choose to practice spiritual yoga, I encourage you to give in to the full experience. If you do, you WILL thank me and feel free to send me an Edible Arrangement. Namaste, Betches!

Morgan Williams is a freelance writer and self-proclaimed connoisseur of cringe. Her passions include oversharing and testing the limits on how many family-sized frozen pizzas one person can consume in a week. Her Real Housewives tagline would be: “You bring the charcutier, I’ll bring the cheapest brand of boxed wine I can find.” Follow her Twitter/Instagram account, @janetforklift, for posts that’ll make you say, “I feel seen.”