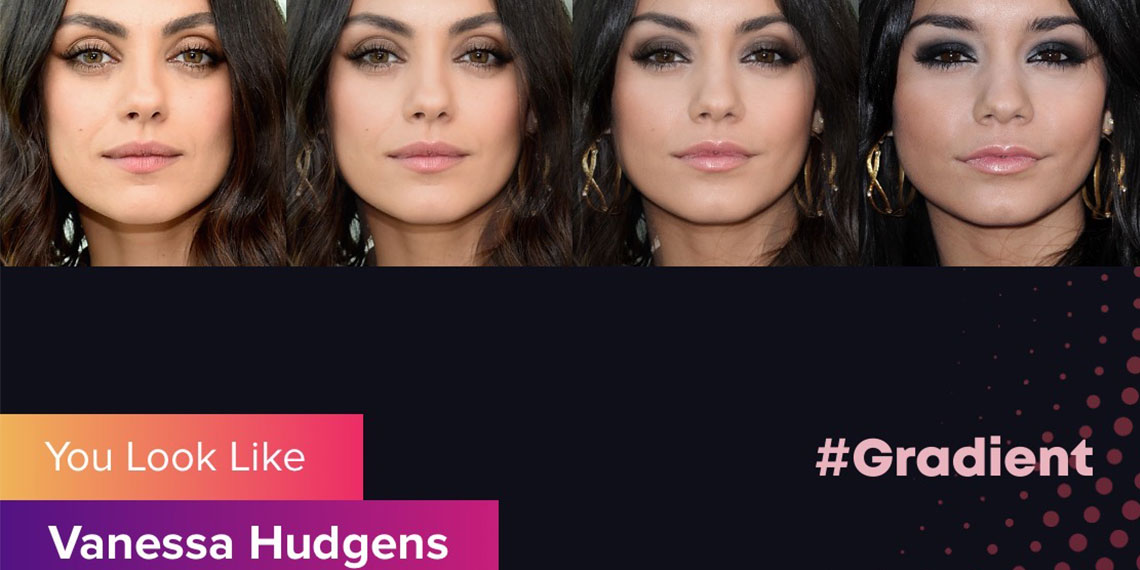 The internet can be kind of a dark place these days, with constant depressing news about politics and how the planet is dying and whatnot. But sometimes, we manage to distract ourselves for a few days with viral memes and filters that are completely pointless, but are just fun. I mean, I’ve spent most of this week laughing at Rise and Shine memes, so the bar for entertainment is pretty low. You probably remember back in July, when FaceApp’s old-age filter was everywhere, before we promptly forgot about it. Well, there’s a new viral app filter in town, and it’s Gradient’s celebrity twin filter.

Now, before we dive in, let’s talk about privacy. When FaceApp got popular (remember? The app that made you look old?), it was all fun and games for a minute, until someone figured out that the app is owned by Russians, and that they could potentially be using your photos for literally anything. Personally, I always just assume everyone already has my information, but I get why some people were suspicious. Lucky for you, I took the time to go through the Terms of Use for the Gradient app, and I think it’s okay, even though I am like, extremely bad at trying to understand legal documents/not a lawyer, obviously. Though you have to let it access your camera roll to do the celebrity filter, at least the company isn’t Russian. The address for Gradient is in Las Vegas, whereas the address for FaceApp is in Saint Petersburg, Russia. Oof.

Okay, now that we have the legalese out of the way, let’s get to the fun part: looking like celebrities! Honestly, the app is very bad at its job, but that probably makes it more fun than if it gave you a disappointing result of someone who also has brown hair, but is definitely way prettier than you. When I started out with a selfie of myself, it told me that I look like…Audrey Hepburn. I mean, sure? Actually, I don’t not see it, even if it sounds totally ridiculous.

Turns out, my result was actually maybe one of the more accurate examples of the Gradient celebrity filter. While no one would ever mistake me for Audrey Hepburn, we’re both kinda pale, have thick eyebrows, and are making the same expression in the two photos. I’m not mad about it.

But when my lovely coworker Nicole tried it, the app turned her into Kim Namjoon, one of the members of BTS, a huge K-Pop group. The only thing they have in common is the angle of their photos and the fact that they are both smiling with their teeth closed. I quickly started to realize that this seems like the main criteria for what the app chooses to match you with.

Things got even more ridiculous when I decided to play around with putting photos of celebrities into the app. Everyone always talks about how Jessica Chastain and Bryce Dallas Howard look alike, so I started with them, to see if Gradient would get confused. When I put in a photo of Jessica Chastain, the app transformed her into… Jessica Chastain. Kind of anticlimactic, but at least it was not wrong.

But when I put in the photo of Bryce Dallas Howard, I was less impressed. It turned Bryce, a white woman with red hair and green eyes, into KERRY F*CKING WASHINGTON. I mean, how?? Clearly this app doesn’t really pay attention to race, which isn’t necessarily a bad thing, but anyone would say that this side-by-side looks completely ridiculous. Kerry and Bryce are two beautiful women, but they look absolutely nothing alike.

When playing around with a few more celebrities, Gradient gave me transformations like Paris Hilton into Demi Moore, Kylie Jenner into Priyanka Chopra (??), and Mila Kunis into Vanessa Hudgens, which is actually shockingly correct. I would never think to put these two next to each other, but it’s by far the most accurate result I’ve gotten from this dumb app.

Obviously, there isn’t really anything scientific going on here, and the app just happens to get it right sometimes. Basically, don’t take it too seriously if it gives you someone ugly, but if it gives you a really good match, you should definitely brag to your friends about how Gradient said you look like Margot Robbie. Gradient said so, and no one can take that away from you.

Lmk the most ridiculous combinations you’ve seen from the Gradient app, because now I’m kind of obsessed.