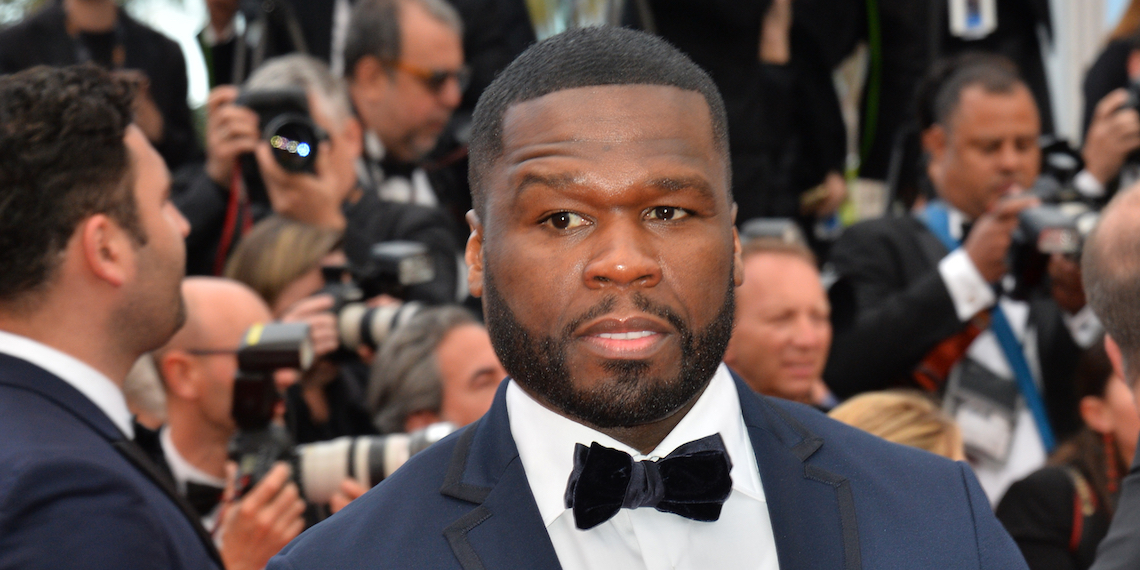 UPDATED: WTF Is Going On With Lala Kent And 50 Cent?

This weekend, the internet has been abuzz, talking about one of the biggest, most important crossover events in entertainment history. Unexpected relationships have emerged, there have been mind-bending plot twists, and someone might not make it out alive. Overall, the stakes have never felt higher. No, I’m not talking about Avengers: Endgame, I’m talking about the epic social media feud of 50 Cent vs. Lala Kent and Randall Emmett.

The feud first emerged out of nowhere on Friday, when 50 Cent posted a Vanderpump Rules clip on Instagram. In the video, Lala explains to Stassi how she met Randall and “let him hit it the first night,” and that after that he would buy her lots of expensive gifts. If you’re an avid VPR viewer, then this story isn’t new or shocking to you, but what does it have to do with 50 Cent? For a moment, I was excited to have another celeb on board with watching the greatest television show of our generation, but things turned dark very quickly.

Out. Of. Left. Field. #CommentsByCelebs

50 Cent’s post and caption about sucking a dick for a Range Rover seemed random, but then Lala clapped back in the comments, in a way that made it clear there was something deeper going on here. To be honest, Lala rubs me the wrong way sometimes, but this is my favorite side of her. Can you imagine anyone else from this show going off on 50 Cent like this? Nope. Still, her clap back isn’t the best re: toxic masculinity, and she also quickly deleted her comment. I already have so many questions here, and we’re not even close to done.

Meanwhile, James and Stassi both sounded off in the comments of this post, but with very different messages. James basically indicated that he’s grabbing the popcorn to watch all of this go down, which seems like a really bitchy thing to do. He and Lala aren’t close like they used to be, but she’s really done nothing to deserve this treatment from him. On the other hand, Stassi stood by her girl Lala, which I respect.

After Lala’s clap back, I was wondering if we would hear any more about this, but then things just got more personal. 50 posted a screenshot of his texts with “Randell,” in which he is pleading with 50 to stop texting him and leave him alone. He says that his ex is f*cking with him, and that he’s going to the ER to make sure he’s not having a heart attack. Hi, yes, please stop the ride, I’d like to get off.

In the middle of Randall’s panicked text thread, we take a pause for one of this stories greatest comedic moments:

If you claim you didn’t snort with laughter when you first read that, I don’t believe you. To commemorate this moment, we even put it on a f*cking t-shirt. Cheers, betch.

In response, 50 Cent sent a paragraph in which he clarifies that Randall owes him a million dollars, and threatens to crack Randall’s head if he keeps playing with him. I said this was going to get dark, right? We have no way of knowing if Randall really does owe 50 all this money, but if he does, he should probably stop shelling out for Lala and the girls to take PJs to Solvang. Just a thought.

Fuck you @Randallemmettfilms you think I wouldn’t find out, you and your little hoe girl friend talk to us weekly. ? I want the rest of my money Monday. #lecheminduroi #bransoncognac

Another crucial plot point in the feud is buried in the caption of this photo, where 50 Cent tells Randall that he wants the rest of his money by Monday. Honestly, I’m nervous just reading about this sh*t, so I have to imagine that Randall has fled the country by now.

It doesn’t end there. Next, 50 Cent posted another screenshot in which he responds to Randall asking him to be in his wedding, and this part is honestly just a little pathetic. 50 is obviously not interesting in being in Randall’s wedding (can’t imagine why not), and he responds with one of my favorite lines ever: “Like I ain’t got sh*t else to do. Get the f*ck outta here.” To be fair, I’m not really sure what 50 Cent is up to these days, but clearly being a groomsman for Randall “My Man” Emmett is low on his list of priorities.

@randallemmettfilms sent me 250k today but I want all my money Monday fuck that, if he ain’t got it he can put his Rolls Royce on the truck to NY.The friend shit is over rated ?#lecheminduroi #bransoncognac

Aaaand another dollar in the Fofty Jar for Randall. Well done.

With his next post, 50 Cent deepened my concern that this could actually be headed to a very bad place. It’s sort of like a meme, except one that makes me genuinely concerned that 50 Cent is about to do something bad to Randall. 50 is always watching.

?look at this fool taking selfies, you better get me my money fool. #lecheminduroi #bransoncognac

In his most recent couple of posts, 50 Cent has openly mocked Randall for saying he’s going to the ER, and he actually posted this photo of Rand with approximately 700 electrode things attached to his body.

Your not gonna die before Monday @randallemmettfilms go ahead knock your self out. LOL

I don’t know a lot about medicine or heart tests or anything like that, but is Randall okay?? I’m all for the drama and the memes that this whole situation has created, but I really don’t want Randall to have a heart attack. Fofty, please.

For now, we’re eagerly awaiting the next development in this already legendary feud, and we’re just mere hours away from the clock striking Monday. If you’re on the edge of your seat like me, now is the perfect time to cop a Money By Monday tee, because this sh*t is going down in history. This is possibly the first time I’ve ever been excited for a Monday, so literally anything is possible. Prayers for Randall, because Fofty doesn’t mess around.

UPDATE: Well, there’s more. We’re still waiting anxiously to see if Fofty will actually show up at Randall’s house to collect his pound of flesh, but things have not cooled down. As of now, it looks like the money Randall owes 50 Cent is debt from gambling. Basically, Randall likes playing poker, but isn’t very good at it. 50 Cent knows this, and lent Randall a lot of money to gamble with. This might seem like a poor choice, but it can be smart to lend money to a bad poker player, because they’ll keep losing, and they’ll just owe you more in the end. A few bad games, and all of a sudden Randall Emmett owes Fofty Cent a million dollars. Yikes.

Yesterday, while waiting for the infamous Monday to roll around, 50 Cent basically turned his Instagram into a meme page dedicated to this feud, and I could not be more here for it. He kicked things off with this screenshot of Randall’s freshly-edited Wikipedia page:

Sadly, Rand’s page has been fixed and is now protected from vandalism, but god damn this is funny. Then, because it’s 2019 on the internet, Chrissy Teigen got involved. She tweeted about how she never wants. 50 Cent to be mad at her, which like, same. But then, things got even better, because FOFTY RESPONDED.

While I’m still incredibly stressed about the situation with 50 Cent and Randall, it’s good to know that Chrissy and John are safe from the wrath of Fofty. I would say this is like something out of a fever dream I had, but honestly none of my dreams have ever been this weird.

50 Cent kept the memes coming, first with this t-shirt that’s not as cute as ours, but it did remind me about G-Unit. This whole story is wild, but the fact that I’m talking about G-Unit in 2019 is probably the most shocking thing thus far. After that, Fofty reposted a Game of Thrones meme, because even he knows the importance of the battle of Winterfell.

?I’m just saying make the best of your Sunday evening. The week days can get rough sometimes. #fofty #lecheminduroi #bransoncognac

This caption might be the most menacing one he’s posted, which is saying a lot. Moving right along from Game of Thrones, 50 pivoted back to his original source material for this feud: Vanderpump Rules (a better show than GoT, there I said it). He posted the clip from earlier this season, when Lala and Rand were briefly broken up, and Lala is saying how there’s a lot of dick she could suck to get PJ flights from other men.

I just asked if we could make a shirt that says “BJ’s For New PJ’s,” but sadly I was turned down. Can’t imagine why. Fofty is implying that Randall is going to be broke after paying him a million dollars, which honestly might be true. It’s now officially Monday, and I’m on the edge of my seat to see what’s going to happen.