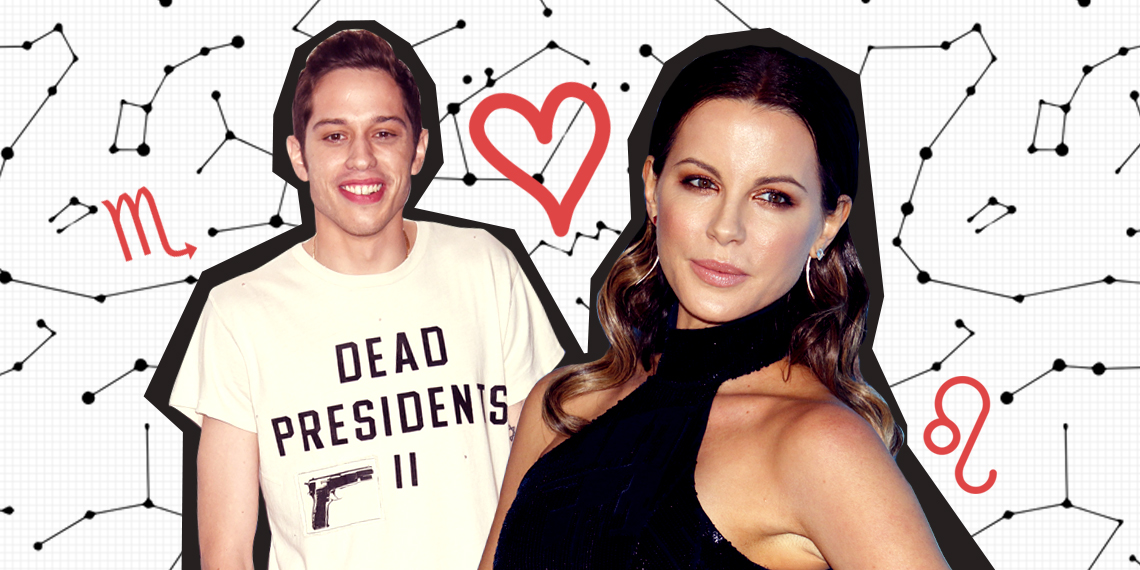 Will Pete Davidson & Kate Beckinsale Last? What Their Astrology Reveals

The internet continues to collectively lose its sh*t over Pete Davidson and Kate Beckinsale and their 20-year age gap. They’ve been mum about their relationship status—our only non-paparazzi confirmation is Beckinsale coyly clapping back via Instagram comments. So, like, how the hell did this happen?

I’ll admit it: I’m charmed by Scorpio and SNL regular Pete Davidson—Ariana Grande’s infamous tweet confirming his BDE might have something to do with it. If BDE (“Big Dick Energy” for those of you living on a limited data plan in your mom’s basement) isn’t one of the first things you think when you hear Scorpio, you’re either lying or you’ve been jaded by one.

Let’s recover our jaws from the floor and ask the actual hard-hitting questions (because what kind of astrologer would I be otherwise?): Will it last? Is she a rebound? Are their birth charts actually compatible—or is BDE all to blame?

Astrologically speaking, there’s blatant tension with this pair. Kate’s a Leo, the zodiac’s over-the-top attention-seeker and a fire sign, and Pete’s a Scorpio, a more silent, brooding, mysterious water sign. Leos and Scorpios are both known for being stubborn af—not exactly what you’d call a match made in heaven. Take J.Lo and Diddy for example—the ultimate Leo-Scorpio mash-up, and a totally sexy flop.

The Leo-Scorpio couple oozes sex—they’re passionate and fiery. After the first one-night stand—er, first date—the sexual tension is palpable. It’s easier to bang away our differences than talk about them, right? And while this makes for serious foreplay initially, turns out that’s not what sustains relationships. (Contrary to popular f*ckboy belief. But, I digress.)

So while it’s fair to say Pete and Kate are enjoying some raunchy Cruel Intentions-level sexcapades right now, over time the glaring differences in their personality could be a source of conflict. But when comparing their birth charts, the screenshot of where all the planets were in the sky at the exact moment you were born, it’s easy to see what led the pair to give it a go beyond the BDE.

There are serious healing contacts between some of the planets in their birth charts that could cause each of them to feel that their meeting is fated. One in particular has to do with an ancient asteroid, Chiron, that represents our deepest wounds that we carry with us through our lives. Interesting things can happen when Chiron intersects with certain planets, namely Venus—the planet that rules our style of love. (Basically Venus is that Love Language book that every sorority girl was obsessed with in 2010.)

Pete’s Chiron coincidentally links up directly with Kate’s Venus. The connection between these two personal points reveals a massive potential for healing love-related wounds, and unparalleled common ground for understanding each other’s expression of love and past hurt. Yes, you guessed it: this is the perfect rebound aspect. They feel drawn toward one another and recognize a potential healing connection.

Thank U, What’s Next?

While the duo is likely basking in a period of seriously hot sex, with a dash of mind-blowing emotional intimacy, we’re all wondering how long this is going to last. Keep your eyes on the tabloids around February 19, when there’s a full moon in Virgo. Kate happens to have her love planet in the sign of Virgo. The full moon is going to be lit af for her love life.

IS HIS SHIRT WHITE OR BLUE??

This is the new Yanny vs. Laurel and the blue/black vs white and gold dress pic.twitter.com/VIi2VVz9KU

If anyone can tame and charm a Scorpio, it’s the queen of the Underworld franchise herself. But remember, full moons bring about completed cycles, sudden change, and, often, endings. It’s a make-it-or-break-it milestone. The pair will either make it more official, or they’ll split. Regardless, both will have a life-altering, sensitive point in their charts activated. And for that, they’ll be so thankful.

Stephanie Campos-Powell is an astrologer, mystic, editor, writer, and cat lover (she has four). She’s a Leo and truly believes she missed her calling as a child star. Reading celebrity birth charts makes her heart flutter, and so does Zumba. In her spare time, you can find her creating passive aggressive astrology memes and trying to make the world a more magical place.