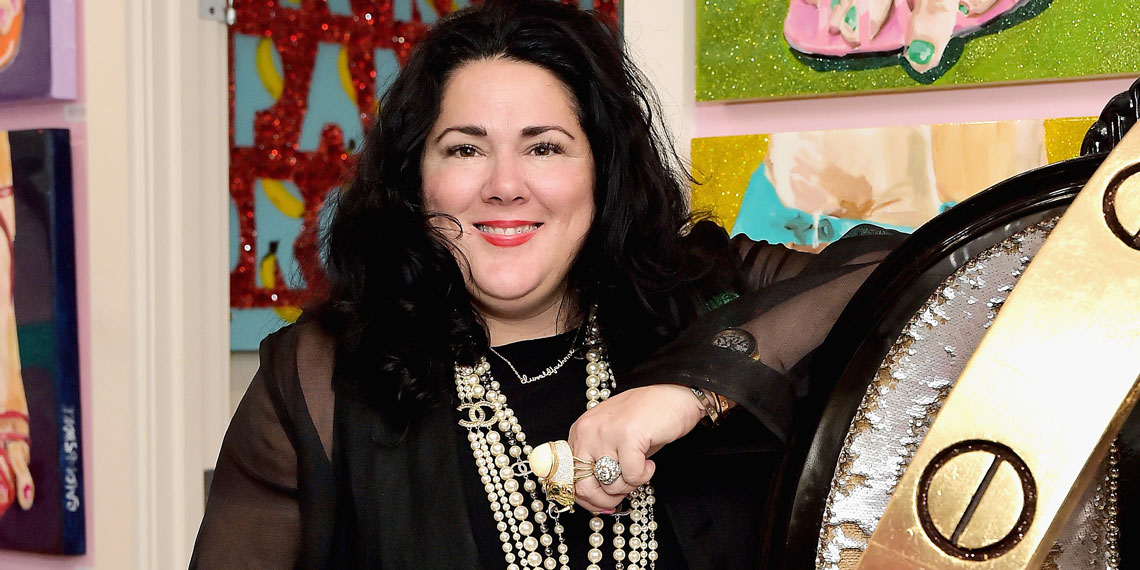 Why You Should Follow Ashley Longshore, The Artist Blake Lively Is Obsessed With

One of the main complaints I ran into when talking to people about the James Charles/Tati Westrbook feud was simply, “who the f*ck are these people?” As you get older, you get out of touch with who the kids are following. It’s simply a fact of life. So I’m here to tell you who you should be following on social media and why. You’re so welcome.

One of my recent Instagram obsessions is Ashley Longshore, a painter and entrepreneur with a casual 209K followers on Instagram. That might not seem like a lot (even though you probs have like, 300 followers rn, so who are you to talk?), but Ashley is going to be huge, and trust me, the celeb and fashion-darling pop artist is going to become your new obsession. First, a little backstory. Ashley grew up in Montgomery, Alabama and was a self-described weird kid with a loud personality who did not fit in at the garden club (same). Ashley had no interest in fulfilling her mother’s dreams of attending cotillion, so she got the f*ck out of Dodge, taught herself to paint, and eventually moved to New Orleans. But reality came crashing down on her when local galleries rejected her work (her early paintings depicted masturbating couples—apparently that kind of artwork is frowned upon in the Big Easy… which is not exactly surprising).

After spending her nights “crying snot bubbles,” this entrepreneurial badass took matters into her own hands and opened her own gallery. And just like in a movie, Blake Lively was driving by one day, and upon seeing Ashley’s vibrant artwork, demanded that her driver stop so she could check it out.

Blake Instagrammed about her new discovery, and just like Serena plucking Dan from obscurity, Ashley began her rise to superstardom. Salma Hayek, Penelope Cruz, and Kelly Ripa snatched up her art. Luxury brands like Gucci, Diane von Furstenberg, and Veuve Clicquot called for collaborations. Bergdorf Goodman selected Ashley to be the first woman in history to have a solo exhibit at their store. Ashley also redesigned their restaurant, which is now an art-filled, Insta-worthy dining destination called “Palette at BG.”

Ashley’s art is so cool, but the best part about her might, unsurprisingly, be her Instagram @ashleylongshoreart. A diehard proponent of doing 20 naked jumping jacks in front of the mirror for morning motivation, this chick embraces her crazy and it is infectious.

In addition to featuring her artwork, her posts alternate between amazingly upbeat music/dance videos, girl power inspirations, honest af stories about her overcoming B.S., and elaborate, absurd, and hilarious backstories about random birds such as “Todd” who “sleeps in a nest above TJ MAXX” and after four drinks “can karoke a perfect version of ‘HOW MANY FUCKS DO I GIVE’ by Erika Jayne with choreography.”

Meet Todd: He works in retail and sleeps in a nest above TJ MAXX. He lives and tweets Fashion and brags about his clothes but we all know he is using that employee discount at Macys.. his favorite expression when whipping out his Discover card is “like shit through a goose”… he is a total size queen… He seems very sweet in person but is nasty in the nest.. he wont let his lovers sleep over and he eats krispy kreme donuts during and after coitus .. He went through a horrendous break up with an awnry lil twink and is feeling a little “fluffy” these days after a two month carb bender… he recently started doing Zumba and the male version of kegels. His drink of choice is a cowboy cocksucker: ( baileys, whiskey and whip cream) After four of them, he can karoke a perfect version of “HOW MANY FUCKS DO I GIVE” by Erika Jayne with choreography … Todd is approachable but is known for extreme bouts of sarcasm… be prepared for joan rivers type heckling and label whoring. Overall, he is a magnificent very entertaining bird. He is best for brunching and is known for having the best GIFS ever…..#ashleylongshore #popart #fuckyeah #birdistheword

Her Instagram is visual caffeine, the perfect hangover cure, and will actually help you channel a positive vibe for the day. If you’re obsessed with Lizzo right now, Ashley is a must-follow, because she brings very similar positive energy. Which is more than I can say about most thirst traps on Instagram. Did I mention that her mantra is “I do not cook. I do not clean. I do not fly commercial”?

Goals… i do not cook. I do not clean. I do not fly commercial…. #ashleylongshore #fuckyeah #popart